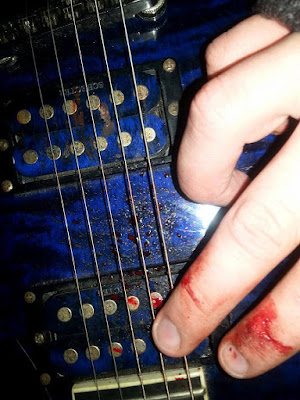 
Q. When did Watterson start? Tell us about the history...
A. In 2014, as a way to keep myself occupied after my stint with Tallgeese. It was a bit of an accident. 2014 was a pretty dark year for me, so I'd been drinking a lot and got the idea in my head to record myself playing my acoustic guitar, and since I didn't have drums and didn't understand how to use a drum machine at the time, I just strung my AT2020 microphone up in my laundry room and banged on the washing machine. Used all kinds of other random crap like empty Arizona jugs and would pretty much just hit what I thought would sound interesting. And whaddayaknow, people were a little interested in it. Deleted those unfortunately, put some work towards writing "Drip," a track I later turned into "Armadillo" on the new album...and promptly delayed putting anything out for three years. Watterson's just my ugly little baby of a creative outlet I turn to when times get tough.

Q. Who are your influences?
A. In terms of music? Not a lot, I'd say the biggest ones are Acetate Zero and Elliott Smith and you can barely hear either of those. The Angelic Process is really cool too. Third Eye Blind has written some amazing tunes, especially on their S/T. And I like Lil Ugly Mane's approach towards songwriting a lot.

If we're not just talking about music, there's a ton of stuff. Cyberpunk for one - stuff like Neil Stephenson's novels, Snow Crash and Reamde and such, Blade Runner, Akira, that sort of thing. And "space cowboy" shtick stuff like Cowboy Bebop and Firefly. I love twists on space. The sensation of drowning is big in a lot of my songwriting, but also just kind of spinning aimlessly into a black expanse, the idea of only having so much air left and staring out at the stars and feeling small. It's romantic and terrifying. I'm also pretty influenced by David Lynch's stuff, Blue Velvet and Twin Peaks in particular, and for nostalgic sections I draw back on things from my childhood like the Redwall series by Brian Jacques and Bill Watterson's Calvin & Hobbes comics (where I got the name for the project to begin with).

Murder By Death - Who Will Survive And What Will Be Left Of Them?
Third Eye Blind - Third Eye Blind
Alex G - RACE
Say Anything - ...Is A Real Boy
Merchandise - Strange Songs In The Dark

Q. How do you feel playing live?
A. Haven't done it with Watterson yet, but it's pretty exhilarating. Biggest problem is I close my eyes a lot and lose all form when I'm playing guitar at a show, I still hit my notes and whatnot but I tend to shred my fingers up pretty badly without realizing it and I break strings a lot, even in 10-15 minute sets. I'm not even thrashing around, I just play like an idiot.

Q. How do you describe Watterson sounds?
A. Gloomy ghostly gaze. Nostalgia-core. Distorted eight layer indie cake. Drowning yourself in the mud you played in as a kid, but with all the problems of adulthood.

I dunno man. Someone said it was like a poppy Maudlin of the Well and I guess that's a pretty cool comparison.

Q. Tell us about the process of recording the songs?
A. It starts with me humming some kind of melody, usually on a walk with my dog or at work, or out and around the apartment. I start thinking of music in my head, maybe map something out on guitar and write out roughshod lyrics. Then are the drums - programmed on ezDrummer, I try to make it sound halfway realistic but I barely know what I'm doing.

Then it gets fun. I set up my interface with the AT2020 recording to the left side and the SM57 recording to the right. The SM 57 has higher gain than the AT2020, so it peaks at roughly 10 dB and the AT2020 peaks at closer to 18 dB. I record bass guitar first, playing along with the drums, then record it again, and flip the second recording the second time so the AT2020 is on the right and the SM57 is on the left. Then I do that for each guitar and synth line, and there are usually 3-4 guitars. In the end, you wind up with around 20-24 guitar, bass, and synth tracks, and I really dig the immersive feel of it - just a swirling, drowning, muddy mess. I want the next one to be mixed a bit better (my first time mixing here), but I doubt anything will change about the layers besides cleaner recording and maybe...more of them.

Oh, and for vocals...that's a pain. I read a while back about how Elliott Smith would record separate tracks for each of his vocals, so now I tend to record about 8 vocal tracks while trying to keep the same timing and inflections and just pan them evenly, around 100/80/40/20 to each side. Glad I record at home, any recording studio would hate me...and I could never afford it.

Q. Which new bands do you recommend?
A. There's a guy named Connor Burnett who has a gorgeous indie project called Pleasance House. In terms of shoegaze, there's this Brazilian band called Devilish Dear who released one of my favorite LPs of 2017, it's super prog-influenced and ethereal as hell, explosive drums, screaming guitars, all you could ever want. Nnamdi Ogbonnaya is some weirdo rap I've been loving lately, dude is gonna be big.

Q. Which band would you love to made a cover version of?
I'd say Modest Mouse, but luckily I got to do that already (thanks Billy!), you can see that on my Bandcamp or Too Far Gone Records' Bandcamp. Outside of them, I'd really love to cover the song "Shitty Little Disco" by Arms, or maybe "Spring Break 1899" by Murder By Death. I don't want to touch Elliott Smith or Daniel Johnston, all their stuff is too perfect as is.

Q. What are your plans for the future?
A. Already writing for album number two, undecided on if it'll be a longer thing or another EP. Depends on what all I turn out and how much of it I like. I'm definitely going in a heavier direction with the new tunes, but I plan on the mix being a little cleaner and elevating the vocals some. Also, I plan on moving to Colorado this fall to go to college at CSU. Gonna try and ingratiate myself into the music scene, maybe join a band, hang out at a breakfast joint at 2 AM, then slowly coerce them into playing my stuff live. (but really, I'd love to play shows...someday)

Q. Any parting words?
Just a big ol thank you to Renato at this incredible blog for getting all these smaller bands exposure in the scene (myself included) and a huge thanks to my friends for encouraging me to keep putting out music in the first place. Shouts to TPS, you know who you are.

Oh, and seriously - my stuff is all free and ideally it'll stay that way until I can't afford for it to be. So give my album a download, lay down with your eyes closed, maybe imagine you're in a space suit drifting in space with no other human presence in sight, and press play. At worst, you can message me on Facebook calling me a pretentious geek.
*
*
*
Thanks