The First Casualty Of Love Is Innocence with Soon, She Said - An Interview 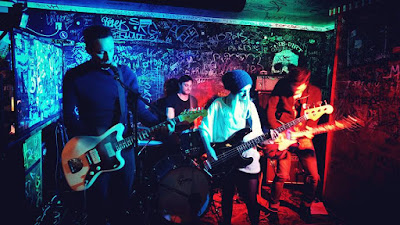 
About Changing our name :
Finding a name for a band is really hard. We had spent months of scratching our heads, trying to be imaginative, opening dictionaries and find a random but cool name… When we settled on Soon, we thought we would be ok. When French label Monopsone started to contact us, they advised us to change our name for record references and because Soon is too common when you google it… We liked Soon, so we agreed on adding something… I proposed Soon, She Said and that was our new name… There is actually a reference to a Boo Radleys Song, Sometime Soon She Said.

Influences on that album :
I think we started out listening to Nothing And Whirr when we starting writing songs for the project and this can be heard on songs like Everday and Stay… Then Marc introduced me to this amazing EP by this band Sway and we couldn't stop listening to it. Lush, subtle soundscaping and breezy vocals… I guess we have been influenced in some way by the constant listening of that EP. Slowdive would be an obvious refrence point, though we didn't wait for the revival to listen to their music;). Cure circa Disintegration or Wish too...

Recording process.
Marc and I start mostly on « sketches ». We live in the same street, so whenever I have something going on in my mind ( riff, melody) and I go at his place and we record rough versions on Logic Pro. Reharsal time is where the songs take form and we spend a lot of time mastering the reverb units we use to achieve the sound we look after. We like spacious, large, cathedral-like sounds and a very simple chord can be transformed with the right effect.

We were lucky enough to record with Bernard Marie, who plays in French shoegaze band ( and friends) Maria False and Dead. Recording with Bernard was a huge part of the sound you can hear on the record. Bernard 's post production work has been amazing and people are always blown away by the sound on the record.

About the result :
We are happy and proud of the record… We live in city where people hardly know shoeagze and we get the usual rants : you should drop the reverb, we can't hear the vocals, sounds like you are in tunnel… We got used to it ! However we feel, that behind the effects, we managed to write « songs », not just noise and reverb. Most of the songs can be played on an acoustic guitar and it sounds fine.

Plans for 2017 :
Well now we need to reach out for shoegaze and dreampop lovers ! We hope that people will be curious and listen to us. We have some gigs planned. Some nice reviews are starting to be written and postive feed-back as well… We'll see. We are starting to write new songs as well, but it's too early to know if we will release anything by the end of this year. Laura, our bass player is aslo a graphist and she has been working on a forthcoming video for our song « Sad Smiling Girl ».

Final considerations :
Well, we'd like to thank people for the attention and nice words about the record. Thank you Renato cause we remember you got some interest in our music ever since our first demo, 2 years ago. We are very grateful for that !

We'd like people to be curious about new music, even if Slowdive, Ride are recording new music, a lot of bands are active and making great music, so please be curious, check bandcamps...
*
*
*
Thanks