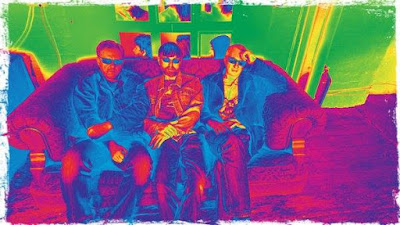 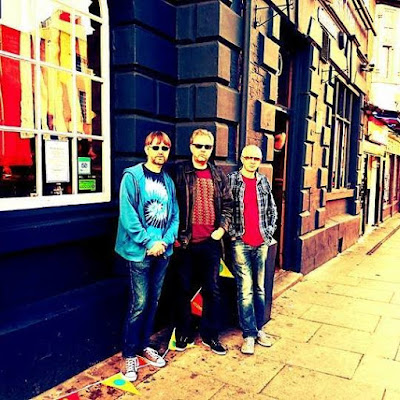 Q. When did New Apostles start? Tell us about the history…
It’s a long story. We got together in 1980, in the dying embers of the punk era. We knew each other through school. Originally a five piece, the nucleus was the three of us (Andy Whitehurst, Phil and Andy Pidluznyj). We went through a number of drummers and performed a lot with a primitive Dr Rhythm drum machine in this period. This was the pre-digital age so we were putting music out on cassette; also we had some of our stuff released on cult Italian anarcho label, Compact Cassette Echo. Then in 1998 we took a break. This proved to be longer than other breaks we’d taken. In fact, it lasted 17 years! Last year we tentatively started playing together again, and we soon realised it was sounding good, in fact, better than ever. Since then we have been extremely busy, recording three albums, West Bank, Apparatchiks and Collateral Damage, with a fourth already recorded and to be released early in 2017.

Q. Who are your influences?
Musically, key influences have been post-punk bands like Wire, Magazine, Joy Division and PiL. Then there’s the pre-punk stuff – Television, Patti Smith, Pere Ubu, Suicide. Going back further, The Velvet Underground, The Doors, The Stooges, 13th Floor Elevators, Love. Obviously, some krautrock – Neu! and Faust to name but two. But we’re equally influenced by lots of new stuff we hear via all the outlets there are nowadays – it’s never been easier to hear great music. And by media other than music – literature, cinema, politics.

Q. Make a list of your all-time 5 favourite albums

Favourite five albums – the list could change from day to day, hour to hour, but as of this minute: Unknown Pleasures – Joy Division
Marquee Moon – Television
154 - Wire
No More Shall We Part – Nick Cave and the Bad Seeds
Strange Days – The Doors.

Q. How do you feel playing live?
We’ve never enjoyed playing live more than we do now. We’re at the stage where we play what we want, if people don’t like it that’s their choice, we’re not going to compromise. The reaction’s been great – lots of energy and enthusiasm at our gigs, and even some outbreaks of spontaneous dancing!


Q. How do you describe New Apostles’ sounds?
People have described our music as krautrock flavoured post-punk gloom grooves. Who are we to argue? Tell us about the process of recording the songs? For both recording and songwriting, we adopt something of a punk ethos – we write songs very quickly, they come out almost fully formed; the same applies to recording, where most things are recorded as a group, live, usually in one take, just overdubbing some guitar and keyboards, plus of course the vocals. Mark at Psyrex Sound Lab understands our sound well and once we’re in a groove, we like to record all our songs in the one session, to capture a moment in time.

Q. Which new bands do you recommend?
There are too many to mention them all, but in Nottingham, The Amber Herd and Eyre Llew. For soundscapes, Transmission 13, Exploding Galaxy, Solemn Shapes, Fluffytails. For unique voices/sounds/ambience, highly recommended are Diane Marie Kloba, and PranaCrafter. Also check out Desert Mountain Tribe and our Soundcloud buddies Tiny Cuts from Cardiff.

Q. Which band would you love to make a cover version of?
Whoever it is, it would end up sounding like New Apostles! Wire, Neil Young and Crazy Horse, Lee Hazlewood would all be interesting to have a go at.

Q. What are your plans for the future?
In early 2017 we’ll be releasing our next album, with the working title “Recurring Dreams”. We’re just considering how best to release it. We have also started working on new material and have three or four tunes that will probably see the light of day later next year. Plus, a few gigs to give people the opportunity to experience the New Apostles live sound!

Q. Any parting words?
A big “Thank You” to everyone who has said kind things about our music. It’s great to find kindred spirits across the planet!!!
*
*
*
Thanks