Pocket Full of Years with Housing Crash - An Interview 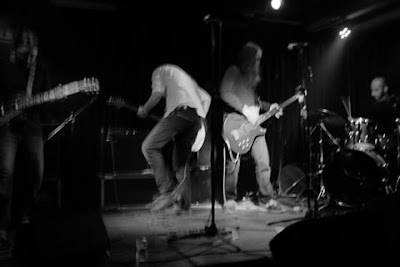 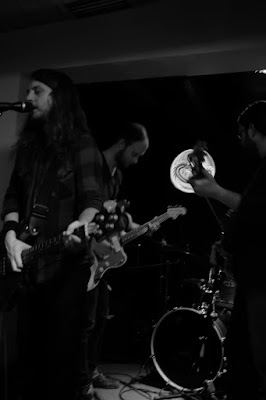 Q. When did Housing Crash start? Tell us about the history...
The band officially got started in May 2016. I'd been making some songs at home with a DAW for a couple of months, and I wanted to perform them live. I got in touch with Murat, Todd, and Paul because I'd played with each of them in several different projects, and they seemed pretty keen on the material. As we worked on the songs in various practice studios around town, each of the guys added their own take on the different parts and helped smooth out the song structures. We haven't been together very long, but since there's a history of collaboration between us, it was easier to gel as a group.

Q: Who are your influences?
Each of the guys brings their own set of influences to the table, and they're pretty wide-ranging. For my part, one of my biggest influences has always been The Cure, though I don't think we sound much like The Cure at all. I've always loved Simon Gallup's songwriting and tone. Really, I just want to try to make songs that have traditional pop structure but also incorporate the noisiness and dynamism of guitar-driven groups like Sonic Youth, Ride, Dinosaur Jr., Catherine Wheel, Swervedriver, etc. Lately I've been really into that crease between postpunk, psych-revival, and college rock that happened in the early to mid 80s. Snake Corps are a great example.

Q. Make a list of 5 albums of all time…
The Desert Island Top 5! Haha :) This is a difficult one, as it changes all the time. For the moment, in no particular order,
The Cure "Pornography",
Brian Jonestown Massacre "Revelations",
Idaho "Alas",
Sparklehorse "It's a Wonderful Life",
and Catherine Wheel "Chrome".

Q. How do you feel playing live?
We love it! More shows, please.

Q. How do you describe Housing Crash sounds?
We try to have the bass, guitars, and vocals all doing different things during the songs, which hopefully gives things some melodic and rhythmic depth. Most of the songs right now are sort of driven by a mid-tempo beat with guitar and vocal lines knocking around overhead. I'm not particularly good at describing our sound, but I think it sort of fits into the noisepop/rock genre. We are not afraid of guitar solos.


Q: Tell us about the process of recording the songs ?
The two songs we've got out now were recorded very differently. "Pocket Full of Years" was recorded live at JamSession Studio in Kadıköy. We banged out a few takes of it, then I did a few vocal takes, and then we sent it off for mixing and mastering. "Sticking Around" was done line-by-line at Bubinga Records in Taksim, vocals were done on a separate day, and then it went off for mixing and mastering. We're rather lucky to be working with engineer Chris Holmes for the mix/master process. He's really awesome at deciphering our input about what sort of sound we want despite the lack of face to face interaction.

Q. Which new bands do you recommend?
Spectres, No Joy, Slight, The Enters, Pinkshinyultrablast, LoveLoveLove, Dream Suicides, Nite Fields... I do an hour weekly on http://standart.fm wherein I try to play a mix of new stuff and old stuff. The amount of good new stuff out there is overwhelming. TBTCI has been incredibly useful to that end over the past couple of years. Thank you for that!

Q: Which band would you love to made a cover version of?
I've been trying to talk the guys into covering "Public Image" by P.I.L., but I'm not getting very far with that at the moment. hehe

Q: What are your plans for the future?
We've got the two video singles out now, and we're going to keep making them. The next one will hopefully be out sometime in late December/early January. Maybe an EP or something later on if we can find someone who wants to put one out.

Q: Any parting words?
Thanks for the interview and keeping up such an awesome music resource!
*
*
*
Thanks