Shimmer with Sleepwalk - Track by Track 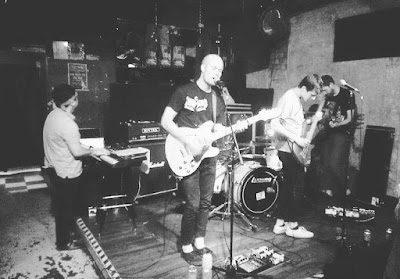 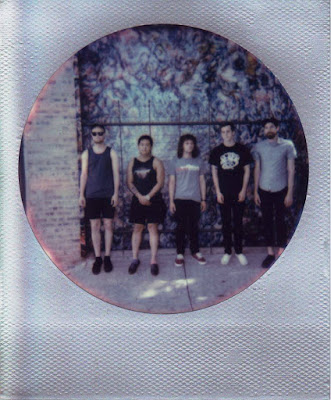 1. The Sinking Waltz
This particular opening was inspired by the opening track to Spritualized's "Ladies & Gentlemen We Are Floating In Space" (which I recently learned that the choir vocal melody is from Elvis's "Can't Help Falling In Love" which bummed me out learning it wasn't original) as well as Mercury Rev's "Holes." When the first guitar layer was put down, there was an obnoxious amount of reverb, delay, pitch warping, and the tone was real deep and it gave a sort of underwater feel, which coincidentally tied in perfectly with the lyrics, and so we ran with that idea. At about 2:35 there is a percussive sound that comes in. This was an attempt to mimic Gavin Bryar's The Sinking of the Titanic, an incredible minimalist/ambient work which is supposed to sound like if the string quartet among the Titanic kept playing after being submerged in water, and it has this weird percussion sound which sounds like ping pong balls bouncing around and it somehow totally gives the feel of being underwater. To get this sound we used a drumstick and an empty plastic cup from Dunkin Donuts and soaked it in reverb. The strings were another thing that had to be in there, but it wasn't until the underwater theme came about that it made sense to have them pizzicato because so they would sound like the adagietto to Mahler's 5th symphony; a piece that is the perfect representation of a rainy day. To further reach a sort of underwater sound, when we recorded the acoustic guitar layer, the recording engineer it put a mic inside of a glass jar to give it a sort of natural filter, and that is what you're hearing with regards to the acoustic guitar. There are many vocal layers in the end, and by the close of the song there is something like 6 vocal layers all going at once, double bass, violin, organ, electric guitar, acoustic guitar, e-bow, and two piano layers. It sounds massive.

2. Shimmer
This is the title track and the first song we put out from the new material. It's actually a very old song idea that came about well before we were really a serious band and when we were only a three piece. The bassist and drummer always loved it and wanted to bring it back so it eventually found it's way back and turned out to be a really nice, catchy, pretty and dreamy track that hooks you right from the start and is a perfect kick off following the opening track. The bridge towards the end that has the "Woah oh oh oh" vocals has this great vocal harmony that the recording engineer thought up that is inspired by Jimmy Eat World's "Sweetness." The lead guitars and synths really make this track.

3. Blush
This song was rewritten maybe 4 times, initially starting a bit heavier and in a different key. After many renditions, it turned into what it is now; a really pretty track almost reminiscent of a less dark The Cure following the theme of the album about the pain and regret of lost love. We were actually going to call the album Blush and by pure coincidence luckily saw that some band Moose Blood had just came out with an album with that same title already.

4. Lucidity Slips
This was another really old track that we brought back because it fit perfectly with the overall style of the other new material. A love child of Ride and Nirvana, a really great lead guitar hook and an interesting vocal melody during the chorus. The ending also has some strings in it that were written while in the studio.


5. Headtrip
This is by far the heaviest track on the album. It was one of the earliest written for the album, aiming for the heavy fuzzed out riffs that can be heard on Siamese Dream. For the really heavy part towards the end, the lead guitar was sounding like Medicine, so we ran with the idea and actually DI'd the guitar and that's why it has such a harsh fuzz tone. To further get that Medicine sound we had our friend come in and add a layer of female vocals on top of the main vocal melody.

6. Take Away
This song has some fo the best guitar tones of the album. The lead guitar for the main riff is this bending, gnarly single note that just gnaws away at you. To get it we had a couple distortions on and ran it through a Boss SP303 sampler and used the Vinyl Simulator on it to give it a vinyl warping sound sort of like what you hear with many Boards of Canada tracks, and then ran it through a super old school analog tape delay. It sounds so rad.

7. Blind
This track was born from an Earthquaker Device's "Organizer" pedal. It's similar to a POG in that it's basically just an octave pedal, but its intention is to sound similar to a church organ (the working title is "Church"). The heavier chorus part was initially something different, but what it turned out to be is really great and alongside the ending sounds a lot like something off of Slowdive's Slouvaki.

8. Shadow
This closing track is the most traditional sounding shoegaze song on the album and is reminiscent of something off of Souvalki even more than Blind. The outro was something that happened by complete accident while practicing and ending up working out perfectly. The snare drum roll during that outro is meant to be very reminiscent of Explosions in the Sky because the whole part kind of had that feel to it. There is also some cello going on, two piano layers, and our keyboardist playing some sax. It's really a great way to end the album and we also tend to end shows with it, as well.
*
*
*
Thanks