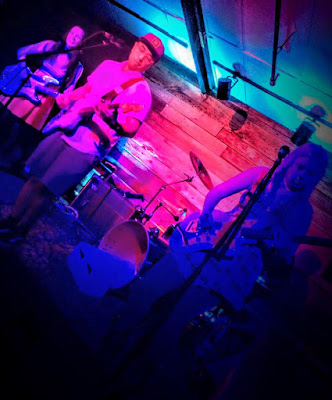 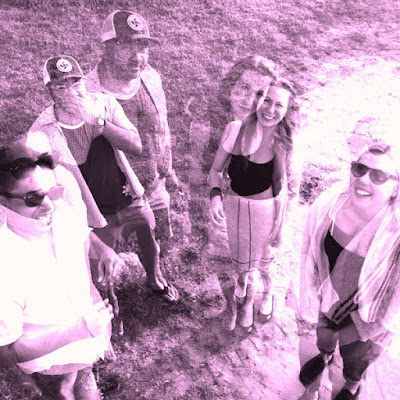 Q. When did Death Valley Rally start? Tell us about the history...
Ralph: We started a little over six years ago, back in 2010. After a band that Tiffany and I were in, disbanded, we decided to start our own project. For several months, the two of us collaborated, writing a handful of songs, before eventually recruiting Robin to play bass and Josh (our original drummer) to play drums. It took us about another year to fine tune our songs and to get comfortable enough to play out live. In 2013, we released a six song EP, "The Stars Shine Brighter After Midnight". Shortly afterwards, we did a small tour of the east coast and midwest. Last year, in the middle of prepping for our recently released LP, "Northern Lights", Josh relocated out of state. We were fortunate  to get our friend Wally to takeover drumming duties last year and to make the transition very seamless.

Q: Who are your influences?
Ralph: Wow! I could write an endless list. In the context to our songs, i would have to say, Ride, Teenage Fanclub, Mojave 3, Half String, The Jesus And Mary Chain, Real Estate, Weekend, and The Cure.

Wally: New Order, Echo & The Bunnymen, American Football, MBV, Lilys, Guided By Voices, Plus Minus, Versus

Q. Make a list of 5 albums of all time…
Ralph: Ride "Nowhere"
New Order "Substance"
Teenage Fanclub "A Catholic Education"
The Wedding Present "Sea Monsters"
Swirlies "They Spent Their Wild Youthful Days In The Glittering World Of The Salons"

Robin: In no particular order:
The Sundays "Reading, Writing, and Arithmetic"
The Cure "The Head On The Door"
New Order "Power, Corruption, And Lies"
Pixies "Surfer Rosa"
Sonic Youth "Dirty"

Q. How do you feel playing live?
Ralph: I always get a little nervous before a show, but once we start playing, my nerves tend to go away.

Wally: Depends on the crowd. If I see them getting into it, I get into it. If the place is empty, it's just like practice.

Robin: I enjoy playing live, especially when the crowd is receptive and seem like they're digging it. It's fun to share what we've been working on with an audience.

Q. How do you describe Death Valley Rally sounds?
Ralph: Heavy on the distortion and reverb at times. We can get loud or we can get soft on any given song. There's always a goal to yield a catchy melody in our songs.


Q: Tell us about the process of recording the songs ?
Ralph: I tend to bring a basic idea of a song to practice, which is usually written on my acoustic guitar at home. And then we keep working  on the song til we're happy with the final product. We recorded the songs that make up our new LP, "Northern Lights" by starting off with a scratch track for us to follow. Then we recorded our individual instruments. We started off with the drums, then bass, followed by guitars. We overdub with more guitar parts and keyboards depending on the song. This recording process was different from our last EP (which was recorded live). We recorded both our albums with Chris Kendrick over at Whiskey Bear Studios in Virginia Beach. Jake Reid from Ice Station Studio mastered "Northern Lights". We were stoked to find out he mastered Static Daydream and Wildhoney's albums, two bands we really dig.

Q: Which band would you love to make a cover version of?
Ralph: When we first started playing live, we didn't have enough songs to cover a standard set. So we covered The Cure's, "A Forest". Tiffany sang lead vocals on the song. There's actual video footage of us covering the song on YouTube, when we played a show in Philly (if you can find it!).

Q: What are your plans for the future?
Ralph: To play a handful of shows before year's end. Hopefully, we get to tour a bit in 2017. We are already working on new songs for our next album and hopefully we can get back into the studio early next year.

Q: Any parting words?
Ralph: We appreciate you reaching out to us! Keep up the good work on the blog!
*
*
*
Thanks