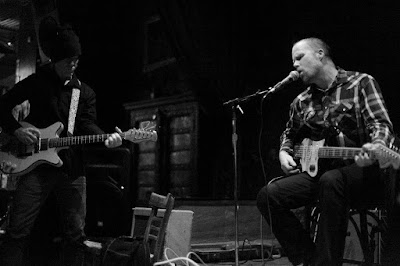 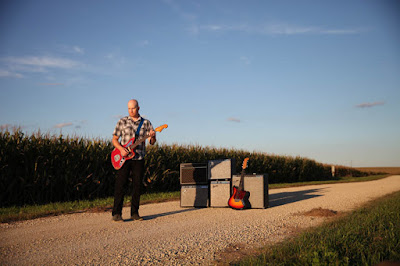 Q. When did Magnetic Ghost start? Tell us about the history...
Magnetic Ghost started initially as my record imprint to release a record by my previous band (whitesand/badlands ; https://whitesandbadlands.bandcamp.com/ ) in 2010, but around that same time, I started using it as the moniker for my solo improv drone music outings--- so it grew out of that. It's turned into a means to fuse my two opposing ways of playing music--- combining improvised elements and songwriting, and I think changed my songwriting as a result.

Beyond music--- open spaces in the world, the feeling of being in an expansive environment without the trappings and anxiety of civilization boxing you in. and the inverse-- trying to know and understand the world we have made for ourselves.

Q. Make a list of 5 albums of all time…
An impossible task, changes and morphs all the time

Q. How do you feel playing live?
Live is all about trying to lose yourself, gain some sort of hypnotic state and ride the waves.

Q. How do you describe Magnetic Ghost sounds?
On record it is a bit more conventional, at least on "Loss Molecules" it's more of a "band" where I played all the instruments, live it has been interesting to re-arrange it for one man, four amps, four signal paths, instrumental and vocal loops--- it keeps reinventing itself.


Q: Tell us about the process of recording the songs ?
I started them at my friend Neil Weir's recording studio (http://bluebellknoll.com/) and then took them home to work on them over a number of months, allowing the writing and recording process to really be one in the same with them. Having the time to mull, consider, and try arrangements that you wouldn't be able to do in a normal studio time frame was of huge benefit. Then, I took the tracks back to Neil to mix, and he took a fairly active roll in producing it, he's got a great ear and ideas to match.

Q. Which new bands do you recommend?
I've been really taken with Weyes Blood at the moment, the new record "Front Row Seat to Earth" is really breathtaking modern psych folk. Not so much a new band, but savvy listeners who would like to hear a truly innovative take on a sort of post kraut psych space jazz (yeah, find that genre, but it makes sense) should look up American Cream from Minneapolis.

Q: Which band would you love to made a cover version of?
I've been playing a couple covers live of late, some pretty radically rearranged versions of Fleetwood Mac's "Sara" and Nico's "Afraid"... they actually blur together, and I think they are something of an interesting pairing lyrically.

Q: What are your plans for the future?
Sporadic shows in support of "Loss Molecules". Currently booking some shows in and around LA / Joshua Tree for early March. DroneNotDrones fest in Minneapolis in February, a truly magical event. (http://dronenotdrones.com/) And I'm already working on the follow up to "Loss Molecules" in my studio.

Q: Any parting words?
These days it's an insane world out there. Value art and creativity! Defend independence and independent thought! Use the internet as a tool, but remember that we don't live there. Go outside away from the city sometime and leave your phone at home! We all need to remember that we're animals sometimes.
*
*
*
Thanks