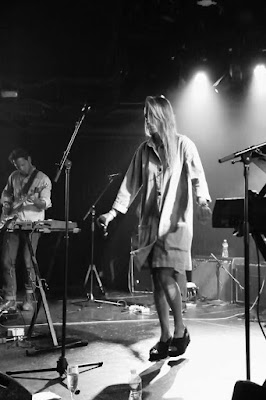 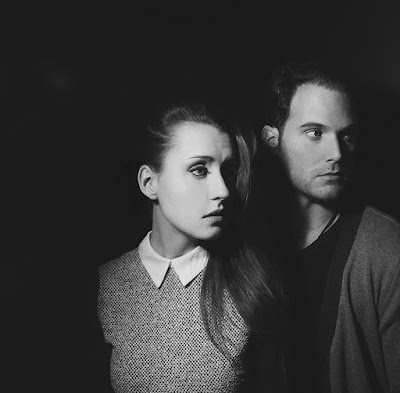 Q. When did Belle Mare start? Tell us about the history...
A: Tom and I met at an open Mic night in Brooklyn. I was playing some original songs with a friend of mine and he approached us. He asked if we had any demos, but we didn't and so he asked if he could record some for us. We started working with him and then my friend left on an extended trip, so I just kept working on new songs with Tom and before we knew it we had an album.

Q: Who are your influences?
T: One of my biggest influences has always been David Bowie. I fell in love with his album Low when I was 18 on a drive up the PCH from Los Angeles to San Francisco. My uncle bought the record for me specifically for our drive and I made him play it on repeat, although I wasn't sure at the time if I liked it or not. Its one of those albums that takes a few listens to make sense. I was lucky enough to see him live back around 2005. While at the show, my mothers friend bought me a signed photograph of Bowie circa 1973. As embarrassed as I am to admit this, I didn't realize until earlier this year when a friend came over to my apartment and told me it was signed by the legendary 70's photographer Mick Rock, whose work was completely foreign to me. Aside from Bowie, Marlon Brando has always been dear to me, and currently I'm a devoted Jana Hunter fan. She's an authentic voice, both musically and intellectually, and in the crowd of noise that is the industry today, she really speaks above it.

A: I would say when it comes to Belle Mare influences are some of the artists I was listening to at the time our band formed. Sharon Van Etten, Cat Power, The National, Mazzy Star. I recently saw PJ Harvey live and she definitely taught me a lot about stage presence. Her performance really inspired me. She has such grace on stage.

Q. Make a list of 5 albuns of all time…
T: Neil Young - On The Beach
Choir Of Young Believers - Grasque
David Bowie - Low
Grouper - Dragging A Dead Deer Up A Hill
My Bloody Valentine - Loveless

A: I always hate this question because there are just so many I could add. For now i'll give you 5 of them that come to mind:
Wilco- Yankee Hotel Foxtrot
Bon Iver- For Emma For Ever Ago
Deerhunter- Halcyon Digest
Sibylle Baier- Colour Green
Widowspeak- Widowspeak

Q. How do you feel playing live?
T: Its so hard to describe with words. All I know is that when Im playing Im hyper aware of my existence and if I close my eyes there seems to be more room in my mind, more empty space

A: I used to feel really nervous, but now I feel so alive. The nerves have pretty much completely dissolved once I started to not care how I looked on stage and just let my body feel the music.

Q. How do you describe Belle Mare sounds?
T: Ive always had an endless curiosity, and a profound confusion about my place in the universe as a result. My hope is that our sound carries that feeling in some way. Looking at a picture of a galaxy or a planet scares the hell out of me and while I stare into it, I'm frightened by how beautiful it is and attracted by how little I understand it . On a more microcosmic level, someones eye can do the same thing to me. So for me its all about trying to recreate that feeling through sound.

Q: Tell us about the process of recording the songs ?
T: Lots of late wine fueled nights, arranging and rearranging, adding instruments and then stripping them away. Slapping my knees like they were snare drums, pissing my roommate off. Leaving open spaces and a lot, and I mean a lot, of listening back. I sometimes won't show Amelia something Ive been working on for months because Im unsure about it. Ill try and imagine her vocals over a guitar part or something and then I slap myself and realize she is going to sing something completely outside the realm of my imagination and thats when things are most exciting for me. That moment where I know we've clicked and we're tapped in. Recording Heaven Forget were some of the best memories I have and I think Ill always hold on to them and revisit that time when Im feeling down and insignificant. Being with Amelia, Rob, Tara, Gary and Ben in the studio was one of the only times I can remember where I felt like everything was right, and the outside world had no bearing on my state of mind.

Q. Which new bands do you recommend?
T: I don't seek out as much new music as I used to. There have been a few albums that Ive really loved in recent years. Mangy Love by Cass McCombs and Painted Shut by Hop Along. Blink Of Light by Keenan O'Meara. He's a wonderful singer songwriter who has one of those voices that can depress you and console you all at once.

A: I think one of the best new bands out there is Big Thief. Keenan O'Meara for sure. Also my friend Charlotte Day Wilson is beyond talented. I saw this band called Drawing Boards recently at Rough Trade and I thought they were freakin' great!


Q: Which band would you love to made a cover version of?
T: Ive always wanted to cover My Girl by the Temptations. Its one of my favorite songs and melodies. Maybe something by The Red House Painters, Brockwell Park has always been on my list.

A: I really want to do a cover of the song "New Partner" by Bonnie "Prince" Billy.

Q: What are your plans for the future?
T: We spent the last 3 years writing, recording, and supporting Heaven Forget, and seeing its release was one of the most challenging endeavors of my life. Its also the first thing in my life that I didn't abandon despite setbacks and complications. In that way, this album is a personal triumph, and Im proud we made it with everyone involved. Its exhausting to constantly analyze your self worth through self critiquing your art, and equally so, trying to peak into the future and dream of how great things could be. While its important to set the bar at a certain height, I'm focused on rediscovering the simple joy of writing music with no expectations. I hope the fruits of that lead to another album sooner rather than later, hopefully another one by this time next year.

A: I couldn't have said it better. I need to focus on "rediscovering the simple joy of writing music."

Q: Any parting words?
T: Over here in Brooklyn, and many places right now, there is a lot of distraught people and so I just want to extent good vibes and at best, some comfort through our music. Best wishes to everyone reading this

A: I'm so happy to have the opportunity to perform with such an amazing group of people. I just want the music to give people comfort, nostalgia, hope, or whatever they are seeking, like so much music has given to me. Thank you to all of the artists that have touched my life. It's important to keep going.
*
*
*
Thanks