Yunost with Super Besse - An Interview 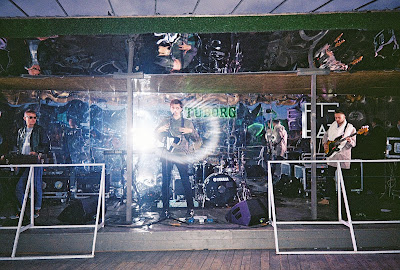 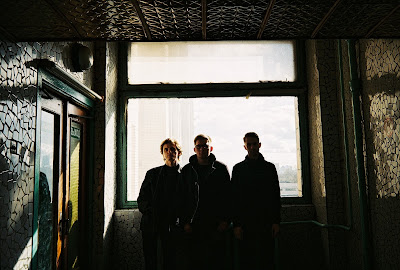 Q. When did Super Besse start? Tell us about the history...
Super Besse was started in 2013 just for fun as trio Alex Sinica, Pavel Mikhalok and Maksim Kulsha - we just make first rehearsal with bass, guitar, synth and drum machine TR-505 and there we created 4 songs. We took the name Super Besse after ski resort in France - our bass player love Tour de France and this race has one check point at Super Besse - and on russian it sound like "Super Demons". After that we created some more songs too, and just put it on internet and since that we started to receive good marks from russians magazines, we received several invitations from nearest festivals, for example Tallinn Music festivals. And it was like fast train - each concert we received new invitation for playing in Europe and Russia, and finally we were signed on I Love You Records label in Riga and we released our first LP there in the end of 2015. After that we toured in France, Germany, Sweden, Denmark, Netherlands, Russia, Belarus etc. Now we have already made new LP and are waiting for October to release it. Our latest release at that time is our limited single Nasilie https://ilyrecsuperbesse.bandcamp.com/album/nasilie and song from force coming album Yunost https://soundcloud.com/i-love-you-rec-sampler/yunost-super-besse

Q: Who are your influences?
A lot of things: from Tour de France and everyday routine, to the bands and artists and films that we love: Jonny Price from The Drums, David Bowie, Joy Division, films by Tarkovsky and Kubrick, Kraftwerk, New Order and of course USSR underground scene.


Q. Make a list of 5 albums of all time…
Well it's very hard questions, because we had hundreds of them:
Zvuki Mu "Простые Вещи",
Nick Cave and the Bad Seeds "Push the Sly Away",
KINO "Черный Альбом",
The Drums "The Drums",
Cocteau Twins "Heaven or Las Vegas",
Joy Division "Unknown Pleasures"...

Q. How do you feel playing live?
It's the most mysterious thing in our band: we are changing at the stage and trying to give concrete concert as the last one, with all expressions. But we know that we can do better so we try to do our best every time. It's our powerful part of existing.

Q. How do you describe Super Besse sounds?
It's bold, mechanic and interesting rhythm with punk-influenced expressions.

Q: Tell us about the process of recording the songs ?
First of all we make jam-sessions, and record them on phones with really bad quality. After that we listen to this records and catch some interesting ideas. After that we focus and work on them, record some parts in good quality, work with these records, make another records, create texts and record vocal and some special effects if we need too.

And for now we focus on our songs.

Q: What are your plans for the future?
In October we will release our second long play album, it will be released on vinyl and CD, also it will be available on streaming services. Also will make tour in Europe and CIS region, we hope that we can come to Brazil, Mexico, we would love to come to another side of our planet. Will see!

Q: Any parting words?
Thanks if you read our interview, we hope that you like our music and see you at our concerts.
*
*
*
Thanks