The Lady of Heaven with Raizel - An Interview 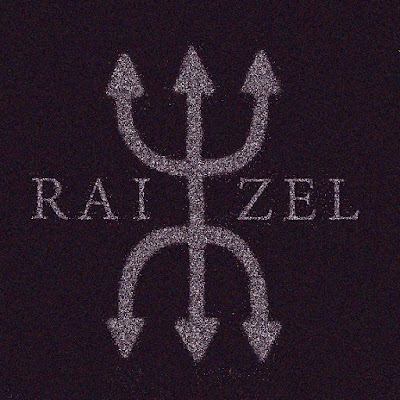 Q. When did Raizel start? Tell us about the history
A: We officially started in the winter of 2015 in Savannah, Georgia in the dorm room shared of Dusk and myself (Knoxxia). We are all SCAD (savannah college of art and design) alumni and we met in school. At the time we were very much a part of the punk scene there. So seeing live music at a friend's house, crowded with a bunch of sweaty, moshing kids, and more often than not the band performing were friends too, all that just made us want to perform more and more. We weren't punk we were goth so our sound would be quite different. One day our friends decided to perform "Oh Comely" for us on her acoustic guitar and I knew I wanted to form a band and I wanted her in it. (She'd go on to be our bassist: Blüd J.) Our name comes from another very good friend of mine. She kind of saved my life while I was going through a life threatening health issue. Her name is Rayzel. I was first introduced to her by another bandmate, Harley. I thought it was so beautiful and feminine sounding yet somewhat dark and endearing. It means "rose" in yiddish. I have a really special connection to the flower and immediately knew that was the name of the sound we were trying to create. (Better than the first name: The Acid Rosehips)

Q: Who are your influences?
A: This is, officiallly, a longer list. But practically our main influences are : Slowdive, Whirr, The Cure, The Jesus and Mary Chain, Cocteau Twins, Love Spirals Downwards, Alcest, Amesoeurs, My Bloody Valentine, Burzum, Joy Division, The Sisters of Mercy and Mazzy Star.

Q. Make a list of 5 albums of all time…
A: My current top 5 are:
5. Mask by Bauhaus
4. Amesoeurs by Amesoeurs
3. Blue Bell Knoll by Cocteau Twins
2. Disintegration by The Cure
1. Pornography by The Cure

Q. How do you feel playing live?
A: Playing live is an extremely exhilarating and cathartic experience. A Raizel live show should be a cross between sunn(o)) and MBV. Loud, dimly lit and smoky~

Q. How do you describe Raizel sounds?
A: A combination of pink and black. A sweet and warm shoegaze sounds with an ethereal and dreampop background combined with a cold and unmercifully bleak goth,industrial and post-black metal sound. The struggle of inner duality with good and evil all coming out in a gothic styled narrative. We rely on a lo-fi and rough style of presentation, with both a loose pop and non-standard composition and structure. Tone-wise we like that early 80s post-punk sound with reverb and chorus being staples, also the 90s garage fuzz to pull the shoegaze out. That plus aggressive joy division esque disco-like drum patterns and distant almost gregorian chant like vocals. Graveyard music but not all souls in this graveyard made it to heaven😈😈


Q: Tell us about the process of recording the songs ?
A: Since we're all scattered around the U.S. we can't all be in one place tp record. So we take a note from bands like the postal service in that we record all instrument parts separately to a backing drum or metronome track and I or Dusk combines them in a sound editing software to mix and master then its all done. I and Dusk are the band's producers so were usually tasked with the finishing steps and I create the visual artwork for the releases.

Q. Which new bands do you recommend?
A: 1.There's the Savannah,GA band:
"The Gumps" there a punk band who takes notes from original 70s punk.
2. New Orleans, LA band:
"Gools" a noisy, horror surf punk alt rock band like a darker pixies
3. Also from New Orleans is:
"Rougarou" a traditional Blues and old school rock and roll band.
4. Another Savannah, GA band we love is: "The Anxiety Junkies" a hardcore punk band who has taken a prime role in the Savannah punk scene.
5. "Trophy Wives" a riot grrrl punk band. All female and amazing. Although they broke up.
6. "Tokyo Shoegazer" a Japanese shoegaze band.
7. "Jatun" ambient dreampop
8. "The Twilight Sad" a post-punk revival, indie and shoegaze band from Scotland.
9. And last but not least :
"Locust Revival" a straight up traditional goth rock one-piece. Similar to "Drab Majesty" but heavier!
(Also lesser known but somewhat old: "Swervedriver" they're underrated imo)

Q: Which band would you love to made a cover version of?
A: Either The Cure or Cocteau Twins!

Q: What are your plans for the future?
A: To make more music. I never want to stop Raizel. Even if its just me by myself. Hopefully though, I can steal all my members to one place to start doing live shows again OR get a live band for the time being.

Q: Any parting words?
A: We try to make our music as free and as accessible as possible. We would rather be as authentic to ourselves and our tastes as possible because we know what its like to have particular tastses and little to no satisfaction. Hopefully we can help ressurect Goth and bring it back to some cultural (or subcultural) relevance.
*
*
*
Thanks