Bottlerocket with Zooey - An Interview 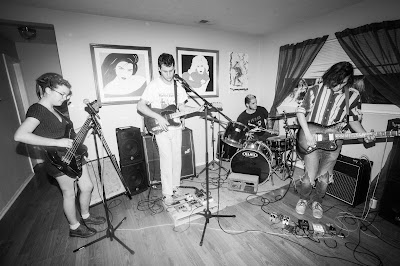 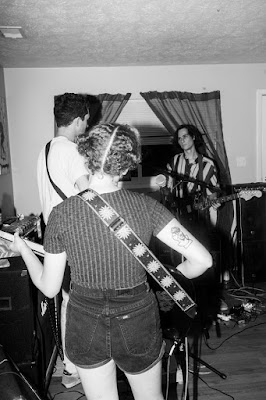 Q. When did Zooey start? Tell us about the history...
A. Zooey began in the winter of 2015, with just myself recording demos in my room. Hannah would come over to record vocal tracks for them or help me with a guitar part I was having trouble with. I would either use programmed drums or have Matt play drums for the recordings, and eventually it got to a point where we realized there were a handful of actually good songs there and we could play live. So, officially, Zooey as it exists now, began there- Hannah on vocals and bass, Matt on lead guitar, our good friend Brian took over the drums and myself on vocals and guitar. We're all best friends and ended up in this great band together; it was really perfect.

Q: Who are your influences?
A. For myself the biggest influences for Zooey, sonically, were groups like The Ecstasy of St. Theresa, Lilys, Swirlies, The Velvet Underground, The Brian Jonestown Massacre, Whirr and of course My Bloody Valentine. But probably the most important band as far as the inspiration for the sound on our record was Drop Nineteens. I remember getting into them and listening to Delaware incessantly and realizing that that was something we could actually do- you could be a few suburban American kids with hardly any budget and make a really powerful record like that. Outside of just the sound of the band, groups like Beat Happening and The Ramones inspired me in the way that they were uncompromising and made what they wanted no matter what anyone else thought, or whatever else was going on at the time . Also, Brian is a Danzig fanatic so for better or worse that may have made its way in there too!

Q. Make a list of 5 albuns of all time…
A. Oh man that is a stressful question... Ugh... Um, well I can tell you what mine have been for maybe the last year or so even though I'll probably leave some out and regret it later.
-5: "You're Living All Over Me" Dinosaur Jr
-4: "Painful" Yo La Tengo
-3: "Velvet Underground" Velvet Underground
-2: "Methodrone" The Brian Jonestown Massacre
-1: "You Made Me Realize" My Bloody Valentine (not an album, but oh well)

Q. How do you feel playing live?
A. I think we all feel pretty good, we've all been in bands before, so it comes naturally. Although, we are all a pretty nervous bunch so maybe everyone is just good at faking it by now? Who can really tell. I can say for certain we all love playing together, in front of people or not.

Q. How do you describe Zooey sounds?
A. I guess it depends on who you're talking to! Noise pop or shoegaze both work, and I think I would just say shoegaze if someone asked me. But labels give me a headache- the most accurate description would just be "crunchy". When my Mom or someone I work with ask, I just say "The Smashing Pumpkins", and they seem to get it.


Q: Tell us about the process of recording the songs ?
A. Well, I demo all the songs myself and then we kind of fine tune them together in practice. With our album 'Bottlerocket', one day my friend Josh Lupowitz basically just told me that I should let him record our album- so I did. Josh is a genius, and he hates chicken, so you know he's REALLY crazy. We recorded the whole thing at his place on a tascam 8-track, very cheaply. The only real expense was batteries for the 8-track, which had a busted power supply, and weed. Josh pushed us to try new sounds and really brought the most out of us as a group. It took about 6 months to finish, which seemed like a while then when it was happening, but I always wish I could relive that time in my life.

Q. Which new bands do you recommend? A. Hmm, it seems like I only find old bands to get into, but there's definitely some new ones I really love. Poster from Tampa, FL are amazing and all really great people, I think Trementina is really great, UVTV, MTVH1N1, Westkust, Milk Music.

Q: Which band would you love to made a cover version of?
A. We always talk about this actually. Things like Husker Du, Pavement and The Ramones get thrown around a lot. But I think if I had my way we would cover "Lovefool" by The Cardigans.

Q: What are your plans for the future?
A. Right now we are taking it easy and just demoing tracks for the next album, which is coming along really well. A few of us have moved around a bit, but we're still within a few hours of eachother. There will definitely be more music from Zooey in 2018.

Q: Any parting words?
A. We really appreciate anyone interested in our music. We make this music because we really love it, but it means a lot when people near or far are into it like we are! Keep your eyes peeled for more Zooey in the not-so-distant future...
*
*
*
Thanks