A Sea​-​Spell with Dreams are Like Water - An Interview 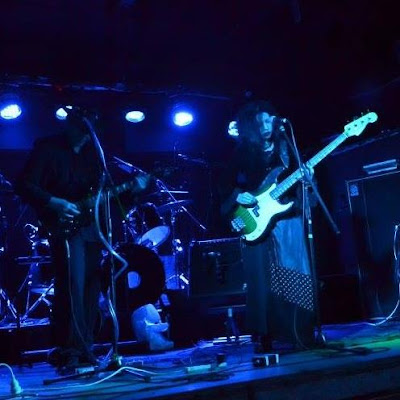 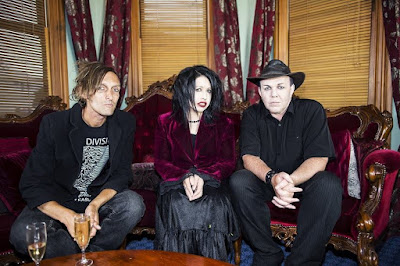 Q. When did Dreams are Like Water start? Tell us about the history...
Rosebud suggested to me the overall premise for the project in about mid 2015; she was learning to play bass, had some song ideas and asked me about contributing to the music. The sound she had in mind was similar to some old demos I’d done for my other band Disjecta Membra, but which had never been properly recorded. The song ‘(Thrice) In Blood’ is essentially Dreams are Like Water covering an old Disjecta Membra song, and the musical skeleton of ‘Ineffable’ was based on demos for another project that never came about.

About the same time, I suggested we should also get Jamie involved. We both liked Jamie, and he and I had been intending to do something musical together for some time, but Rosebud coming along with Dreams areLike Water was the first time anything clicked into place. Again, there were sounds in Jamie’s own recordings as The Emptys Response that Rosebud and I both felt would be a good match with what she had in mind for this project.

I think the three of us only started getting together regularly at Jamie’s near the end of that year, trying to get something together for our first gig in February of last year. The music for ‘Feathered Infant Bells’ from our EP grew out of those first jam sessions; initially a very long (even longer than it is now), semi-improvised piece that we concocted for that gig. At that point, the song was called ‘In Memoriam’, and revolved around readings from the Tennyson poem by the same name.

We only played one other gig after that, in mid 2016. It was just Rosebud and I this time, because we live some distance from Jamie and we were having trouble being able to regularly get all three of us together. For that gig we just played a bunch of covers of songs that had previously been covered by This Mortal Coil. Neither of those two gigs were particularly what we’d been aiming for, and the whole thing just petered out for a while after that.

Finally, earlier this year, we decided we should change our approach and make Dreams are Like Water solely focused on recording. We got back in touch with Jamie and started exchanging song ideas and files back and forth online, and that was much more successful. The song ‘A Sea-Spell’ was the result of working that way together, and then the rest of the EP was developed and recorded over the space of a few weeks.

Q: Who are your influences?
It varies from one song to another.

Q. Make a list of 5 albums of all time…
No! Hahaha… No, we had to answer a question like that for our last interview and we all decided that we just can’t do it. It’s impossible to just choose five.

Q. How do you feel playing live?
I enjoy it, but not with this project. We’re not well suited to live performance. Dreams are Like Water works better as something where we can build and layer instruments and voices and just keep adding and subtracting elements until we’re finished that song and ready to move on.


Q. How do you describe Dreams are Like Water sounds?
I prefer to use other people’s descriptions… refer to the press release!

Q: Tell us about the process of recording the songs?
Rosebud and I record in our bedroom, and I think Jamie records in between his bedroom and lounge. Rosebud and I use a very, very minimal set up, whereas I think Jamie’s house might actually be constructed from wall-to-wall music gear.

The way we approach it changes with every song, but generally speaking, once we have a reasonably clear idea of how the words and music will go together, we usually start by recording a basic skeleton of drum machine, bass and guitar parts. Those initial parts will usually survive through to the final mix. We might also record a guide/demo vocal track to play along to while we’re still working out how the final vocal arrangements will go.

We’ll usually send that basic skeleton off to Jamie while we carry on working out various other ideas. He’ll send things back to us, usually keyboard parts and sometimes guitar ideas, sometimes other sounds. He’ll often send a lot of different parts and ideas, but he does so very quickly and spontaneously, with a certain degree of abandon.

With most songs we carry on like that for a few days, sending things back and forth. Once we’ve started recording a song it can be difficult to stop coming up with new ideas to try out for it, so we usually end up recording and re-recording layers and layers for all the different instruments and vocals, throwing in every different idea that comes to mind, just to see what “sticks”. A lot doesn’t make it into the final mix. We just continually add and subtract things until we settle upon what works for each song.

And then at some point we’ll somehow conclude that it’s time to stop, usually arriving at a sort of “peace by exhaustion”, and that’s the basic tracking done.

Then I’ll send what we’ve decided to use to Bryan Tabuteau, who takes care of the post-production and final mixes. I send him stems and a project file that has a very primitive approximation of how we think the overall mix should sound, and then he takes out all of my awful stock reverbs and what-have-you and makes it sound good. I don’t know what he does exactly, some sort of voodoo, as I understand it.

TL;DR: We record lots of things, and then Bryan makes it sound good.

Q. Which new bands do you recommend?
A Thousand Hours, and Crimes of Passion.

Q: Which band would you love to make a cover version of?
We’re working on something at the moment, actually, but it’s a secret. You’ll have to wait and see…

Q: What are your plans for the future?
These are also secret!

Q: Any parting words?
Thank you very much for the interest and support. If readers would like to hear our music or grab the EP (download or CD digipak), here are some links:
http://dreamsarelikewater.bandcamp.com
http://vesperrecords.bandcamp.com
*
*
*
Thanks