Down Memory Lane with Seatemples - An Interview 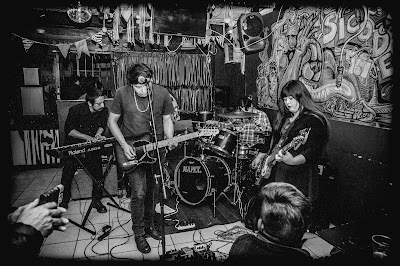 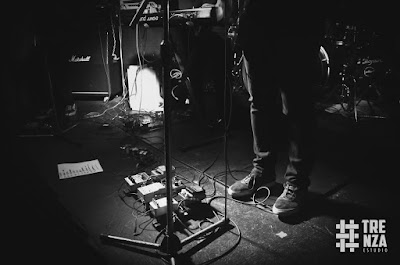 Q. When did Seatemples start? Tell us about the story...
S) The band was formed in April 2014, when Patricio (aka Patricio Temples) and Priscila (aka Raw Material) took up a pending project from before. Months later, Patricio was djing records at a pub called Rock & Sicodelia and met Moisés Segovia, then he was invited to a soundcheck for Lanterns in order to sound out the result of adding keyboards. As a result, the band consolidated its line-up being Patricio (Vocals, guitar, workstation/samples and drum machine), Priscila (Bass, vocals) and Moisés (Keyboards and synthetizer), after a year and a half Diego Herrera joined the band to play drums.

Q: Who are your influences?
S) Well, we have many different influences starting with The Cure, Slowdive Joy Division, The Chameleons UK, The Jesus and Mary Chain, Cocteau Twins, Spacemen 3, Spiritualized, My Bloody Valentine, Lucybell (old stuff), Malcorazón, Pixies, Ride, The Stone Roses, Cranes, The Brian Jonestown Massacre, TON, The Field Mice, Drop Nineteens, Stereolab, The Pastels, Trisomie 21, Crystal Stilts, A place to bury strangers, The Soft Moon, TSOM, The KVB among others.

Q. Make a list of 5 albums of all time…
S) The very first place goes for Just for a Day by Slowdive, then Darklands/Psychocandy by The Jesus and Mary Chain (we couldn't decide which one), Pornography/ Disintegration by The Cure (same story here), Treasure by Cocteau Twins, Methodrone by The Brian Jonestown Massacre, Self-titled by Stone Roses, San Bernardo by Malcoracón, Script of the Bridge by The Chameleons UK, Delaware by Drop Nineteens – Delaware, as you may notice we really suck listing albums (laughs)

Q. How do you feel playing live?
S: It has really been a journey since when we started playing live, we played with a drum machine/sequencer so we had to do it perfectly so we could keep up with the programmed drums, so that made us a little bit nervous in the beginning, but then, Diego joined the band in drums and the we could perform more relaxed and everything goes very smoothly now. We enjoy playing live a lot, it's showing a part of you to unknown people that can only get to know you through your music.

Q. How do you describe Seatemples sounds?
S: We would say that our sound is based on layers that try to evoke nostalgic atmospheres, through the use of reverberation, delays and other resources that make our heart warm and satisfied.


Q: Tell us about the process of recording the songs?
S: Patricio usually records a demo and plays it for a while until new ideas are added to the original song, actually, we have several versions of our songs, then we try them in some shows or gigs if it suits the right vibrations and layers played live is the right version to record on studio and so on, anyway, we often check the mixing and the rest of the process to maintain the essence of the songs.

Q. Which new bands do you recommended?
S: Considering we come from small cities in northern Chile, and as a part of an emerging DIY local scene we would like to recommend bands we use to play with, the first one is Kilómetro 22, actually Mario from that band co-produced our album, Bedroom Dreamers is another close act we use to play together, then we have some gig partners as Neoyka and Mandrake closer to fuzz rock, and finally we recommend Maff and Kingdom Fields (Santiago) Citrus Cloud (USA) and Star Horse (Sweden), Cazamos Cometas (México) and some 90s bands from Chile such as Malcorazón (San Bernardo album) and Sien.

Q: Which band would you love to make a cover version of?
S: Well, we already participated in A homage to Slowdive with our version of Spanish Air, but we often talk about recording a 6 songs ep with covers from bands and singers such as Los Angeles Negros (Patricio is a big fan of them), Nancy Sinatra, Lee Hazelwood, Charlie Feathers, Jeanette, The Beach Boys, Dead Can Dance, This Mortal Coil, David Bowie, Los Prisioneros, NEU!, Suicide, Red House Painters, Guided By Voices, The Velvet Underground, The Byrds, Siouxsie ... we need some significant time to decide which ones though (laughs)

Q: What are the plans for the future ...
S: Right now we are promoting our first album “Down Memory Lane”, that came out a week ago and we are super proud of, and we are also already working on our second album, drafting ideas and rehearsing a lot. We expect to have something to record by the end of 2017 and continue working and developing our music.

Q: Any parting words?
S: We want to thank everybody who has believed in our music and has shared it, and of course we want to thank you Renato for your support, we invite everyone to give a listen to our first full length and of course ask you to support your local bands. Follow us on: seatemples.bandcamp.com, soundcloud.com/seatemples, www.facebook.com/seatemples/ and Spotify. See you around good people!
*
*
*
Thanks