Dead Batteries with The Shining Hours - An Interview 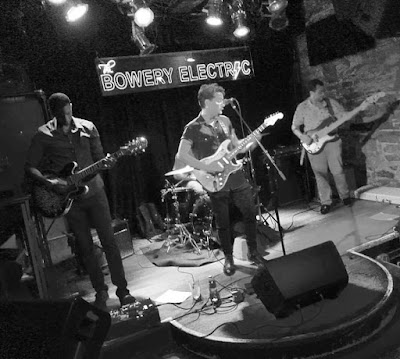 Q. When did The Shining Hours start? Tell us about the history...
Having been the brainchild of lead guitarist Joe Peters, The Shining Hours has consisted of a steady rotation of various members since 2011. The current iteration and lineup has been together since February 2017, having got in a dingy rehearsal room and mashing away until what came out was remotely pleasant to the ears. We've been steadily moving forward ever since.

Q: Who are your influences?
Though we all contribute tiny shreds of our separate influences to the table, the ones we mostly share are artists like:

LP: The Stooges, The Smiths, The Strokes, Oasis, The Replacements, Tame Impala, Jane's Addiction, My Bloody Valentine and U2...the list goes on and on.

Q. Make a list of 5 albums of all time…
1. The Queen Is Dead- The Smiths
2. Achtung Baby- U2
3. Definitely Maybe- Oasis
4. Whatever People Say I Am, That's What I'm Not- Arctic monkeys
5. Thriller- Michael Jackson

Q. How do you feel playing live?
LP: There's just this inexplicable feeling you get from playing live that nothing else in the world can bring you. Not even sex. There's an electricity in the air, your nerves are on overdrive and when everything gels just right, man, it feels like a damn steam engine just shot out of your chest. Playing live is pretty alright if you ask us...

Joe: Its Exciting and Cathartic.

Q. How do you describe The Shining Hours sounds?
Like finding your true love for the 10th time. Like the first step outside of your house on a late summer night when the sun is just about to set, but hasn't quite gone all the way down yet. And like a swirl of loud reverb-drenched guitars and a driving rhythm section that lays the bedrock for the infectious melodies and lyrics that just about anybody can relate or sing along to.


Q: Tell us about the process of recording the songs ?
In our short experience recording as a band, we'd say we like to do as much as possible in preparation for recording instead of just figuring everything out in the recording studio. Sometimes you have spontaneous moments where things come out better while recording than expected, so generally we just go with the flow and try not to push too hard on the vibes. We all bring something to the table.

Q. Which new bands do you recommend?
We're not sure if these are all new bands, but they are local/underground groups that we appreciate such as Radkey, Snailmail, Surf Rock is Dead, Drowners and The Nectars.

Q: Which band would you love to make a cover version of?
LP: Probably an Arctic Monkeys song, or something that's never ever been done like 'Hallelujah'...haha.

Joe: The Killers- Read My Mind

Q: What are your plans for the future?
To survive the next day. We can't really do much if we're dead but you won't know til you try right? No but really we are at such an early stage in our band's life that we wanna do practically everything, but for starters we'd say we want to record another EP or a consecutive set of singles, make a bomb-ass music video, and start opening shows for local bands and eventually touring our butts off around the country or better yet, the world!

Q: Any parting words?
We of course want to thank the blog for taking the time to give us a platform to showcase our music and say some words. You're part of the reason music will never die! Future thanks to our millions of fans that we'll eventually have. We better see your smiling faces moving your mouths to the words at our next show, or else we have to get real jobs, and no one wants that.
*
*
*
Thanks