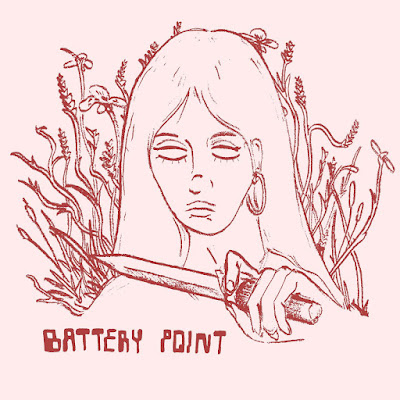 
Q. When did Battery Point start? Tell us about the history...
We started around July of 2016. Cris our guitarist and I met in our college newspaper class in fall 2015. I asked what music he was into and he did the same, we weren't into the same things at all, we still got along really well and became inseparable though. He mentioned one day that he plays guitar, I said "oh, I play bass let's start a band!" We began to jam together and practice, I showed him bands like Slowdive, Alison's halo, and My Bloody Valentine. After awhile we wrote our first song which was violet dream! I put on a house show in July of 2016 and the drummer we had playing for us completely messed up the songs, we cut our set short and wanted to give up. That show is where we met our drummer Alex, we asked him to join and he agreed! Things became more serious around October of 2016 where we began to practice more and write material all together. It was a long process but once Cris and I found Alex, it all came together!

Q: Who are your influences?
We have influences from all different styles since all of us listen to a wide variety of genres! Slowdive, My Bloody Valentine, Ride, An April March, Alison's Halo, Blueboy and all that good stuff for the most part!

Q. Make a list of 5 albuns of all time…
Ahhhh this is always tough!
I would have to go with, in no specific order.

Morrissey - Your Arsenal
Blueboy - Unisex
My Chemical Romance - I brought you my bullets, you brought me your love
Jawbreaker - 24 Hour Revenge Therapy
American Nightmare - Background Music

Mainly this list consist of records I can listen to front to back without skipping a song!

Q. How do you feel playing live?
Starting out, we were all really nervous, we didn't know what to expect. There's always room for improvement! It's still a learning experience as we just really started booking shows.

Q. How do you describe Battery Point sounds?
I wanted to start a band that wouldve been on Sarah Records, I don't believe we would've honestly! Cris and Alex had never really heard of the genre I wanted to do! It was a learning process but now I know they love it! I would describe us as an indie pop band!

Q: Tell us about the process of recording the songs ?
The recording was two days. First day was all the instruments, which were all done live! It was our first experience together in a studio! Alex, who recorded us was really patient with us and he was really helpful, we were all clueless and new to it all! The second day was vocals and adding on some extra stuff like tambourines and keys and such! The funny thing really is I had asked my friend Abril to sing on the recording a week before and she agreed to do it, which was great! I never liked my voice, I didn't want to sing at all to begin with, but I felt weird not singing words I wrote. I knew I could never sing violet dream from the start though! It was definitely a learning experience. I look back now and I'm like ahhhh I sound so nervous, at least that's what I hear! Overall it was great though!

Q: Which band would you love to made a cover version of?
Blueboy or New Order or The Velvet Underground!

Q: What are your plans for the future?
We plan to continue and keep making music, hopefully tour in the near future! We are recording some songs really soon and after that we want to work on an album! Really just keep the momentum going and play more shows!

Q: Any parting words?
If you're thinking about starting a band, do it!!! I wish everyone the best! Be yourself and do what you love, don't compare yourself to others! thank you to all those reading this and we appreciate all the support so far!