Barely Not Dead with Manorlady - An Interview 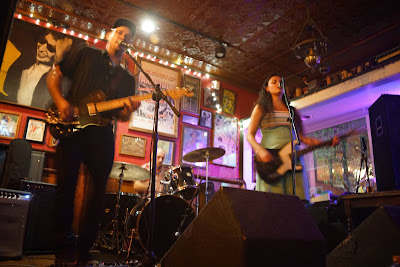 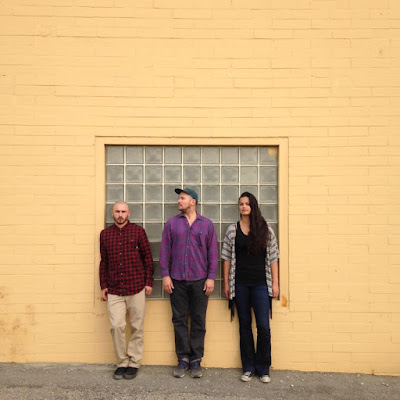 Q: When did Manorlady start? Tell us about the history...
(M): Manorlady formed in 2009, in Charlottesville, Virginia, and was made up of Aaron and I, and my younger brother Donald who lived with us at the time. The idea of the band grew out of a climbing accident in which Aaron shattered his ankle and needed a new favorite/serious hobby. Both Aaron and Donald had played music for many years but never together, and I learned to play bass in order to join them. Donald played keys, and Aaron played guitar and programmed beats, using a MIDI foot controller to steer the beats during live performances. Donald has been off doing his own thing for a while but is always welcome to jump back in whenever he wants. Over the years we’ve played with and without drummers, on the east coast for a few years and in California since 2013. We’re stoked to currently have a rad drummer, Conor, allowing Aaron to focus on guitar and vocals…and all the extra pedals that go with that!

Q: Who are your influences?
(M): When we first started playing together we decided to each come up with a couple songs we’d want to cover, to get an idea of what we might be working with. We all liked a lot of similar music but also had some different interests. We recorded a few of these cover songs, which ended up on our ‘Home Away’ EP and were pretty random, from Beach Boys to Portishead to American Analog Set. Without it really being the intention, our tunes ended up sounding a little dark and moody. Maybe that was my fault, as I had us regularly listening to The Cure and a lot of other music that might be considered on the darker/heavier side of things. I’m also influenced by a lot of female fronted bands and artists, like Broadcast, Bat for Lashes, and Chelsea Wolfe.

(A): I have always been attracted to well composed music, small or large. I also really appreciate play-through production for LPs and EPs, or basically any recordings that are well mastered and fit very nicely and intentionally together. When I was 12 my Dad showed me Pink Floyd and then it was all over. I guess I really like quality production. Other than punk rock the first music I blasted in my room was bleep bloop IDM, and specifically Squarepusher. I was (still am) fascinated with his take on both production and live performance. Eventually in college a friend handed me a copy of Loveless and things changed again. It took me like 6 years to fully comprehend what was happening there. The interesting part is that by this time I was in a band with Melissa, and we had been drawing a lot of comparisons to early 4AD bands like Cocteau Twins. It is interesting because after that it seemed like in many ways the music we started playing led us to this strange weird shoegaze world.

(C): My main and first influences as a drummer were and are mostly older jazz drummers. I was trained as a jazz musician from a young age, so I have to show some love for Philly Joe Jones and Jimmy Cobb, who both played with Miles Davis during his first "classic period". I also really enjoy some contemporary jazz drummers like Steve Jordan, JoJo Mayer, and Brian Blade. In terms of rock, I'm a huge Topper Headon fan (of the Clash), and of course John Bonham (of Led Zeppelin). I do enjoy some modern indie drummers too but I feel the good ones are far and few between unfortunately, including Jeremiah Green of Modest Mouse, Justin Peroff of Broken Social Scene, Brian Chase of the Yeah Yeah Yeahs, and Steve Holmes of American Football. I enjoy drummers who can groove, feel the music, and express themselves, as opposed to ones with chops or speed.

(C): London Calling by the Clash, Blood on the Tracks by Bob Dylan, Love is Hell by Ryan Adams, Kind of Blue by Miles Davis, A Ghost is Born by Wilco, American Football by American Football, Voodoo by D'Angelo The list goes on...


Q. How do you feel playing live?
(A): Playing live is where the recording magic needs to deliver as a live performance. It can certainly be done in a number of ways, but really needs to be convincing and entertaining. When we were doing the drum machine thing for Home and Ego Oppressor tours I was really adamant that the beats were ‘performed’ in one way or another; and I’m glad that we did it this way. There were a lot times in the middle of a song where someone would miss a cue and would play something different (quite often I was the guilty one), and having the opportunity to play ‘foot DJ’ with the beats meant that we could improvise. It meant that the song was unique and live, and not some kind of disgusting band karaoke situation. With live drums, and specifically with Conor, I am happy to move on to more complicated guitar and vocals stuff. When removing the MIDI foot controller from my pedal board, it did feel like a giving away a small piece of my heart. Fortunately it was easily mended with more pedals.

(M): I still get a little nervous playing in front of anyone, but I’ve grown to really enjoy it, especially when surrounded by good people.

Q. How do you describe Manorlady sounds?
(A): Being the person who initially writes the songs, I am probably not a great person to answer this, but my aim in writing is to convey a bit of emotional complexity in a few minutes. I try to write stuff that captures individual emotions in the context of other individual emotions. This is what life is like.

(C): A giant noise cluster of at least 20 emotions at a given moment.

Q: Tell us about the process of recording the songs?
(A): To some extent I have always been technically involved in the engineering or recording process. For ‘Home’ we self-recorded guitars, keys, and vocals at our home (“Manorlady Manor”, of course) in Charlottesville, Virginia. Most of the drums were re-recorded in a huge studio at UC San Diego. My brother, Cameron Bailey (Boarsley), had just finished a Computer Arts and Music undergrad program and was working as a technician in the studios on campus. Cameron has a great sense of musicality and the ability to access some fancy tech tools (I’ll come back to this in a minute). Cameron also did most of the production for ‘Home’. For ‘Ego Oppressor’, the whole process was done in-house. The beats for ‘Ego Oppressor’ were entirely synthetic and intended to be quite dark. This meant that I could keep using my early 90s hardware to get exactly the abysmal, de-tuned sound we’d been practicing with (Akai S-01, Alesis HR-16). I used Ableton Live to do the engineering and production. This was pretty simple for us because I also used Ableton to ‘perform’ the beats for practices and live shows. For the latest EP, ‘Barely Not Dead’, we had moved to California and began working with our friend, Ryan Lee, who had been playing for years and recording other folks in the area. We had this small collection of songs, of which half were years old and the other half were super new. Melissa and I initially set out with Ryan to record a demo and then in a single day most of the EP ‘Barely Not Dead’ was recorded. We laid down guitars over a little Korg Beats unit, and then laid down vocals right away that same night. We were in the market for a new drummer and asked Cameron if he could help us lay down a proper drum track to finish building a demo. He suggested trying out this new virtual drum kit that he built in Ableton, which emulates six microphone placements on a kit. Anyhow, after a bit of skepticism on my part, only to later be hugely impressed, he delivered the drums that are heard on the EP, which are pretty rad. We are currently in the demo process for what will shape up to be a new LP. With Conor having joined us, we’re doing this one totally live. Things are sounding great so far. 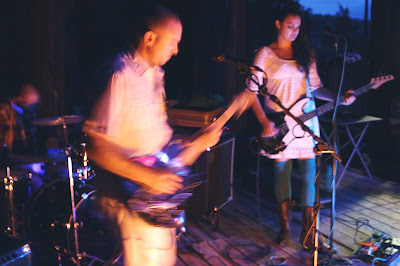 (C): The World is A Beautiful Place, The National, Ryan Adams just put out a great new record as did American Football, The Growlers...

Q: Which band would you love to make a cover version of?
(A): Several of our earliest covers were recorded on our first EP, ‘Home Away’. A new cover would be some kind of bloody fight between Pat Benatar, The Breeders, and Broken Social Scene.

(C): Anybody good! It would be fun to shoegaze some old Motown!

Q: What are your plans for the future?
(M): We have been working on quite a few new songs and hope to record another full length album this year. Other than that and playing live as much as we’re able, the future is open to whatever may come!

(C): Grad School, recording my own solo album, continuing to progress in my bands, and progressing with my poetry and my writing!

Q: Any parting words?
(A): We really value all the love from fans and folks that have helped us along the way. Stoked for the new stuff in 2017. I think this is the biggest and most concise music we’ve ever made.

(C): I appreciate the time. Go outside a lot. Get off your phone. Listen to good old records. Love animals. Smoke a lot of cigarettes and drink a lot of coffee. Buy a skateboard. Travel. Help somebody in need. Love and live in music. Read a lot of books!
*
*
*
Thanks