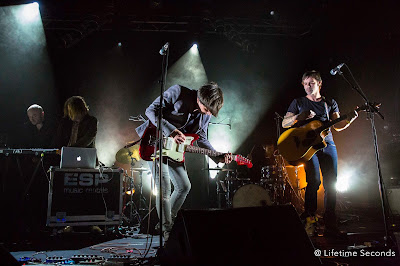 Q. When did Fools Ferguson start ? Tell us about the history...
In 2011, I had the opportunity to collaborate with Martin Glover, the producer of The Verve, James and the bass player in Killing Joke, on the recording of two songs. It was not a success, mainly because I did not manage to impose my views in term of production. I thought hard on this idea until Sebastien (the current bass player in the group) proposes me, a few months later, to record a jam session in the style of krautrock in a disused shed of Boulogne-sur-Mer, in the middle of winter and in the middle of the night. There was reverb everywhere. It was a revelation. Afterwards, I began to write songs with always The Stone Roses in my head. In may 2012, the group was formed with my brother to the drum. We were three in the band at that time. Then, there was our first EP. As I tried to find a sound mark, it was necessary to complete the line-up with other musicians. Something happened during the recording of "Night Lights", in 2014, which appears on our second EP. We had had to add an acoustic guitar and an Oberheim synthesizer. From that moment, I understood that the sound of the group was formalized : melancholic pop melodies typical of The Cure, cold and hypnotic side of Kraftwerk, neo-romanticism of Echo and The Bunnymen. And always this reverb, omnipresent like a sixth ghost musician.

Q: Who are your influences ?
Nobody in particular. Just a period. Let’s say all the pop culture between 1984 and 1992. It is not nostalgia, just a question of writing, production, arrangements and artistic vision. There are mainstream things like Duran Duran, Prefab Sprout, The Go-Betweens, Tears For Fears. But also things more underground. All the the Creation Records’s albums released until the first LP of Oasis (including this one), and those of 4AD too, were determining, in the way of making ringing noisy songs which are finally extremely simple. When My Bloody Valentine’s "Loveless" released, it was such a cataclysm that it would be a serious mistake not to mention it. I would also mention the neo-romantics like The Church, Echo and The Bunnymen and all the synthpop / synthwave of the 80s, including the BO of horror - retrofuturist movies, John Carpenter and David Cronenberg in particular. Finally, there is jazz from the 50s to the 80s, which brought the art of the harmony to levels never reached since Bach.

Q. How do you feel playing live ?
We have a kind of manifesto on this topic : we put ourself a maximum of pressure during rehearsals to allow us to forget all this pressure during our shows. What we play on stage is a kind of strict organized block driven by a complex computerized system. Thus, it’s impossible for us not to have accumulated working hours upstream at the risk of sounding fake on the D-day. So, while playing live, we feel shared between control and liberty. To be more precise, it’s like waves between these two feelings.

Q. How do you describe Fools Ferguson sounds ?
It’s the sound of a group supposed to fill stages of 30 000 people but playing in these same stages desperately empty. And the band has an immense pleasure to do it. It is the epic sound of solitude and disappointments.

Q. Make a list of 5 albums of all time…
I don’t have big discovery to offer to your readers. Thus, I’ll be honest and will stay on the classic ones :
Beach Boys’s "Pet Sounds",
My Bloody Valentine’s "Loveless",
Miles Davis’s "A Kind Of Blue",
Kraftwerk’s "Computer World",
David Bowie’s "Low".


Q: Tell us about the process of recording the songs ?
Let me answer following a chronological order : main melody on guitar, construction of the harmony on piano, creation of various versions, tests of these versions in rehearsal, choice between these versions (five to six different versions by title). Once all this validated : recording and mixing by ourselves, recording of the additional tracks, sending of the groups of instruments to the mastering engineer. 90 % of the time dedicated to this process is dedicated to a mountain of tests. Till the end, nobody in the band is able to say if all this is going to end in something which is cool, brilliant or completely worthless. It is a long way marked out by failures.

Q. Which new bands do you recommend ?
Zombie Zombie, Real Estate, A Place To Bury Strangers, Wild Nothing, She Past Away

Q: Which band would you love to made a cover version of ?
The Loft, New Order, The Cure, The Stone Roses, King Crimson, Pink Floyd, David Bowie (the Berlin period)

Q: What are your plans for the future ?
To increase and strengthen our audience through the Internet, to begin touring at the rate of two gigs per month from June. From October, we shall begin to work on a second LP. It’s difficult to predict what will happen afterwards, and how the band will sound in the future. Everything will depend on the number of failures, and on the nature of these failures. Only the things which do not work worth that we devote time to them. Much less than the things which work.

Q: Any parting words ?
I invite everybody to switch off his television and never to switch it again, to boycott companies exploiting their employees, not to read the enticing and pointless web papers, not to consider that a pair of boots worths a Picasso’s paint. Et caetera. All this has no direct relationship with music but is essential : rock, pop, indie, shoegaze and - more generally - high value pop culture can not exist without a mass market constituted by educated and not slavish consumers.
*
*
*
Thanks