Notorious with Small Reactions - An Interview 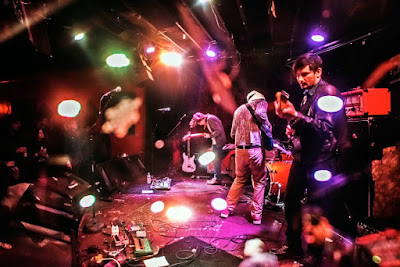 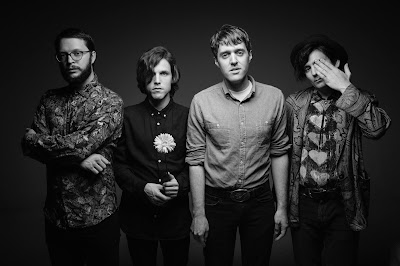 Q. When did Small Reactions start? Tell us about the history...
Sean: We started playing music together in 2005, but didn’t really become Small Reactions and shift to the music we’re playing now until around 2009 or so. We started out sounding like a jam band (much like Phish) and ended up sounding like we do now, some how. I think hearing Television, Wire, and Stereolab for the first time changed what we wanted to play.

Ross: My influences range from the post punk to classical. To compose a song is often a task of finding the balance between construction and deconstruction. I think Scott Walker's later albums would be a good example of this. Where the art rock of Eno and Bowie are taken a little further into minimalism, leaving the song as a puzzle to put together in your mind and can take a few listens to really absorb.

Q. How do you feel playing live?
Scotty: When it’s going well, playing live is like daydreaming or sleeping – you don’t really know you are doing it because you’re off somewhere else for a time.

Ross: Live shows are the ultimate musical expression for myself. The recording process makes the song something complex, but performance brings the challenge of representing a composition with a different set of rules. It's all about dynamics. Having the highest point be the most intense and the lowest point to barely holding onto the grid. I don't like when bands have the same emotion and beat for every song. To me a performance should play like a movie.

Sean: Our songs are more varied than they used to be, but I liked to think of our sets as toeing the line between control and chaos, like a high-speed train that almost derails and sometimes it might. Reckless efficiency? That was always the intention. Like a barista who makes a successful, tasty cup of coffee, but makes a huge mess in the process.

Q. How do you describe Small Reactions sounds?
Scotty: It changes a lot. Our first LP was like a noisier, gothier Walkmen. For our upcoming LP, I’d say it’s more sonically diverse and dynamic. Not too mention it’s minimal - guitars + bass + and a little bit of synth.

Sean: I always tell people we sound like a loud, noisy pop band. We want the songs to be big and loud and repetitive, but we always want everything to have a hook, too, no matter how dark the it gets.

Q: Tell us about the process of recording the songs ?
Scotty: Recording was done at studilaroche with Ben Price engineering. It’s a house studio, and we got to cut basically all of the tracks live. We made a lot of a coffee and tinkered around with all of the little instruments Ben had laying around. I was heavy into Bowie at the time and I remember listening to Station to Station nonstop before arriving in the morning and going home at night. It was only a few weeks before he died.

We mic’d up vases of water for the track “El Dorado” at Ross’ suggestion.

Sean: We’ve always thought that recording live works best for us. We do vocals and a few guitar and key overdubs later, but, otherwise, we feel best working as a unit. I think the first record has two songs that weren’t tracked this way and the next one is the same. We’re thankful for engineers who are excited about that, too.


Q. Which new bands do you recommend?
Scotty: I am really behind on this. There’s so much out there. I think it’s important to know your history, though. For instance - Prince. I grew up knowing who Prince was, hearing “Purple Rain,” and, as I got older, intrigued by his whole persona. Beyond his music - which, iike, Jesus, “Dirty Mind” I cannot stop listening to - he was a song-a-day type of artist. He’d shut everything else out and work day-in, day-out. When it came time to deliver an album, he’d have 3-4 albums of material recorded. I gravitate towards that way of working - the songs, etc., they come out of the air. You get them or you don’t. You think of them after a dream or while you’re walking around the house playing an unplugged electric guitar. It doesn’t make sense to me that you can be out of that state of mind, ever. I like being in that state - always creating, always thinking, always moving. Sorry this was a terrible new band recommendation. I’d have to say Cindy Lee makes utterly fantastic music that can take over your life for a little while.

Q: Which band would you love to made a cover version of?
Scotty: Devo

Sean: One time, years ago, we chose our set for an upcoming show by literally drawing our set from a hat. As we were pulling out the songs, Clinton had put “Monster Mash” as a one of his songs. It was supposed to be just our songs in the hat, but that wasn’t the case. We played it since we drew it and there were no reservations. So I guess Clinton would have us cover “Monster Mash” by Bobby “Boris” Pickett? I’ll cosign that one.

Q: What are your plans for the future?
Scotty: Release LP#2 this Spring, record again, release something else in the fall. Keep moving.

Q: Any parting words?
Scotty: I read in a Trish Keenan interview that she would play a game where she had to write a song from scratch and record it within 30 minutes. It might be crap, or it might be amazing. Either way, don’t negate the benefits constraints often provide.
*
*
*
Thanks