Bayonet with Belgrade - An Interview 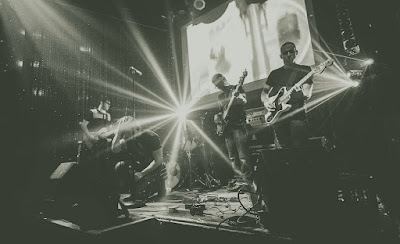 Q. When did Belgrade start? Tell us about the history...
Belgrade began in the summer of 2011 when Jeff Meyers (drums) and I (Matt Hanemann – guitar) started playing in a practice space we shared with other bands we were in at the time. We both wanted to do something musically different than we had the opportunity to do before in our other bands over time. We had known each other for about 10 years at that point and were both in pretty loud, energetic and sometimes abrasive bands. Growing up surrounded by different genres of punk and hardcore as our main outlets, we both were kind of gravitating towards something a bit more musical and experimental – and with lots less distortion and yelling. We soon brought on Derek Zglenski (bass) and Jason Bucci (guitar) to start honing in the sound… After a few weeks we decided to call up our old friend Mike McNelis to come and sing for us. In the early 2000’s, Mike sang for the band The Progress (which our bands had all shared the stage with at various points) - and we always loved the sound of his voice. Mike was looking to do something similar and less overtly punk-rooted too. After only a few months – we all found our niche in the creative process and wrote our first LP pretty quickly. We played out first show in February of 2012 with the Jealous Sound. Since then, we’ve been lucky enough to share the stage with Real Estate, Appleseed Cast, Circa Survive, Cymbals Eat Guitars, Walter Schreifels, The Velvet Teen, and a ton of other bands we look up to.

Q: Who are your influences?
Our influences are kind of all over the place… Everything we’ve experienced and and all of the music we listen to plays a part in how we express ourselves. I’d say anything from mellow classic rock like Fleetwood Mac and Thin Lizzy to confrontive art-hardcore Universal Order of Armageddon and Drive Like Jehu, to current local bands like Little Big League, and classic alternative that we all grew up on, like My Bloody Valentine, Pixies, and Nada Surf — hell – we even covered Wicked Game by Chris Isak at a show before.

In terms of how all of our influences make their way into the Belgrade song writing and performance process - I feel like we all channel the feelings we get from hearing music we love and try to bring that to the table in a non-specific way. We all come from slightly different musical histories (with a lot of overlap) but we all try to keep our sound tempered by embracing less distortion and more reverb.

Q. Make a list of 5 albums of all time…
Wow… that’s a REALLY hard one. I think each member of the band would have different thoughts on this question… So I’ll just drop a few that I know have made it to the top of my list at different points in the past 5 or so years that the band has been together. How about Ten, or so? (I listen to a lot of music) ;)

Sonic Youth “Goo”
The Wipers “Over The Edge”
Boys Life (everything they’ve done)
Land Of Talk “Some Are Lakes”
Karate “595”
Yo La Tengo “I Am Not Afraid of You and I Will Beat Your Ass”
Hot Snakes “Suicide Invoice”
Walter Schreifels (Basically anything he does - but especially the demos before Walking Concert)
Kite Party “Come On Wandering”
Maritime “We, The Vehicles”
Neil Young “Broken Arrow”
Team Dresch “Personal Best”
Psychedelic Furs “Psychedelic Furs“
Real Estate “Live“ — anything with the old drummer.

… and all of that Kinsella stuff always gets me motivated.


Q. How do you feel playing live?
When we have a great show — the feeling is euphoric. Almost in a black-out state of mind because you are so ‘in the moment’ of what you are doing that the rest of the world and all of its details kind of melt away. I think, if you have the ability to get lost in execution of your own songs - it’s the best feeling ever.

Q. How do you describe Belgrade sounds?
It’s hard to get perspective on that - as a member of the band. I’d say that hearing us I hear many different things… including the ever-unattainable goals we are setting for ourselves. It’s ever-evolving… If I had to give a classic response to that question - I’d say on record we are pretty atmospheric - but there are definitely very tangible and sometimes pleasant structures underneath it all.

Q: Tell us about the process of recording the songs ?
For the first record - we went about it the way we’ve always done - Wrote a bunch of songs and recorded them (13 tracks) in two different sessions with Vince Ratti (Skylight studios). Pretty standard recording session. Most of the music was done pretty quickly - and we worked with Mike and Vince to get the vocal sounds we wanted. We split up the first batch of recordings because we could only fit 9 songs on our Vinyl LP - and released the rest of them (with an additional remix) as an EP after the LP was out. We later combined all of the songs on one 14-song CD, which was released on Happy Little Trees/Cargo Records in Europe. Grab one if you can get them - there weren’t that many made.

For the next grouping of songs - we went about the writing and recording process very differently - writing a song - then recording it by itself or with one other track in a different studio - with different engineers based. We really wanted to experiment with different sounds and approaches - rather than being one cohesive sound from song to song (Like the first record was). We’ve tracked at The Headroom (with Joe Reinhart from Hop Along, Algernon Cadwallader, Dogs On Acid) - and at Gradwell House (with Dave Downham) a few times.. and have great experiences with both. I think we’ve decided we like aspects of both processes… But the latter definitely take much longer to get the songs out there. it’s not quite as economical to do each song in a different studio either. Ultimately - for the last batch of songs - we did a lot of home tracking (guitars mainly) and combined them with the studio recordings so that we would have a bit more control over the end product. So far it’s working pretty well - and is sounding a lot more like “us” . The latest song “Bayonet” is a great example of a hybrid home/and studio recording - and we think it’s a pretty true representation of the song.

Q. Which new bands do you recommend?
Wow… another tough one. In Philly especially - there are so many great bands and projects starting up all the time. Lately I’ve really been listening to a lot of Philly bands like Cherry, Spirit of The Beehive, Open City, Sun Organ, Sun Airway, Japanese Breakfast, Cave People, Three Man Canon, Restorations (Jeff’s other band), Yankee Bluff, Hurry, Hop Along, Littler, and Goddammit. Lots more I can’t think of right now - I know I’m gonna kick myself later.

Q: Which band would you love to made a cover version of?
Lately I can’t get enough of that song “Virginia Slims” by FutureBirds…. it’ just one of those songs you hear and never want it to end… I’d love to cover that song and get lost in playing it live. it’s simple and tangible - great vocals… and just totally bathed in reverb.

Another one would be My Bloody Valentine’s “When You Sleep” - i know it’s kind of cliché choice and has been covered by a million people already… but I guess there’s a reason for that… it’s absolutely captivating and catchy.

Q: What are your plans for the future?
Writing more music… louder, quieter, weirder… better.

Q: Any parting words?
THANK YOU!