Sputnik with Los Kowalski - An Interview 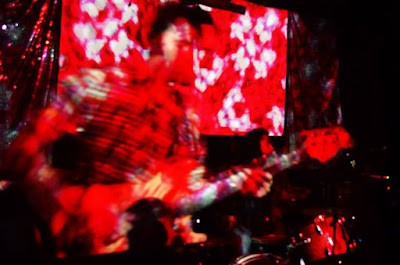 Q. When did Los Kowalski start? Tell us about the history...
We´ll have to go back to 2011, the three of us were in a four man band which after the first show the 4th guy left and we decided to keep on, about one week later we were playing some improvise jams, and a couple of covers from The Pixies at the 4th floor/rooftop terrace of an art gallery, this was very cool because you just don´t see tall buildings around this town to look from. The set was around 20minutes long but it got the attention from the owner of the place; he came on to us and said "I want you to be this place´s band, so comeback in a month with a 3 hours set", for which we really started to improvise and try to stretch out the set longer. We reached to 1 hour and a half and filled the other time with other bands.
Then we started doing this long sets and amazingly the attendees remain until the end. The three kept playing since.

We had the chance to meet Alberto from Lorelle Meets the Obsolete, who agreed to mix our EP Sputnik, which we released on 2015.

Couple of months later Alvaro from Hole Records send us a message asking us "When are you planning to play in Mexico City?" For which we actually were looking for somebody to hook us up a gig there in March 2016, it didn´t come until September 2016 that we finally went there and play with this wonderful bands like Tajak, and that night met Samuel from Gravy Records.
There will be a "Sputnik" cassette edition coming out by both Gravy and Hole Records.

Q: Who are your influences?
I think our sound began with some Velvet Underground and Stooges roots, although we didn't really talked about how we would like to sound.

We were really into The Horrors, they opened a world for us, we found a lot of elements we liked, mixed with sounds we've never heard before. We started getting into different kinds of Psychedelic, like Krautrock and Shoegaze.

I think some bands that helped to shape our sound were My Bloody Valentine and Cocteau Twins…. and The Stone Roses... and Joy Division!

Q. How do you feel playing live?
Playing live is an experience we enjoy a lot, we learn a lot from playing live. You have to be 100% in the moment to get surrounded by the sound and vibe from the band, we have to be connected to build a wall of sound, which we have learnt to summon live.


Q. How do you describe Los Kowalski sounds?
I think I found a shimmering quality in our sound, similar to a cool breeze, or a warm wave of colours. It's really loud with a euphoric vibe.

Q: Tell us about the process of recording the songs?
We are going to release an album, which was really interesting to record, because we took different roles at the time of composing and playing. We played drums, guitar, bass, synths, theremin and the three of us sang in different songs.
We recorded each instrument separate.

Q. Which new bands do you recommend?
Mr. Saldos from Ensenada, Camedor from Guadalajara, Tajak and Sunset Images from Mexico City and Dissapearing People from Oakland.

Q: Which band would you love to made a cover version of?
There is one song from Nina Simone that we would truly love to

Q: What are your plans for the future?
We are planning to release our first album later this year and make some dates, and tour. By the moment we are working on new songs, we feel we are on a good moment, so we want to get the best of it.
*
*
*
Thanks