Aktivität with Verstärker - An Interview 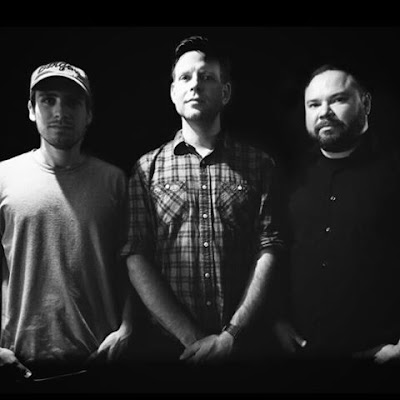 Q. When did Verstärker start? Tell us about the history...
Verstärker is a three-piece Kraut/space rock band based out of Kentucky, USA. We are comprised of James Gibson (bass and synth), Jason Norfleet (drums), and James Vitatoe (guitar). In many ways, the story of Verstärker is a story of friendship. All three members come from the same town and were friends before forming the band. We have been in various groups together before, but this is the first consisting of this line-up.

In the Fall of 2011, Jason and James V. were co-workers and spent much time discussing music, particularly their mutual love of the sounds coming out of Germany in the early 70s. We took to the basement, jamming with just guitar and drums. Enjoying what we were creating, but not feeling it was fully developed, we invited our friend James G. down in early 2012 to add bass and synths, solidifying into Verstärker.

Throughout 2015 we started recording our first record in James G.’s basement studio, Cosmere. We self-released “Aktivität” on cassette through our own imprint SpaceLab Records in Oct. 2015. Since then, we’ve been playing shows regionally and working on new recordings.

JV: Musically, I always say my top three are Fugazi, Minutemen and Sonic Youth; from there so much flows. Krautrock greats like Neu!, Harmonia,

Can, Cluster, Kraftwerk, but also stuff like Black Sabbath, Joy Division, Chrome, Bailter Space, Turing Machine, Swervedriver, and Stereolab. This list could go on and on with more Punk, Post-Punk, Jazz, Noise, and Drone groups. Other influences are the ideas of repetition, minimalism, existential and dystopian literature/philosophy, and modern artists like Kandinsky, Klee, Albers, and Malevich.

Q. Make a list of 5 albums of all time…
Being huge music fans, this one is really hard… but we’ll give it a shot:

Q. How do you feel playing live?
JG: I enjoy writing and recording more than playing live but I love the risk that is involved with playing free music that has a limited structure. The thing I enjoy the most about playing live is making new friends at shows, traveling and watching the other bands/groups that we are lucky enough to play with.

JV: Liberating. I love letting the reverberation of the music be transcending; letting it carry me away mentally. It’s such a freeing experience.

Q. How do you describe Verstärker sounds?
We use the phrase “Motorik Space Exploration.” Individually, we say …

JV: Spacey-vibe with a motorik beat and noise drones.


Q: Tell us about the process of recording the songs ?
JG: For the most part, we recorded our first release live and improvised. We had a loose structure but did not force anything. Since we recorded the album in my basement, we were free to experiment and take liberties without worry of cost or time that comes with conventional recording studios.

JN: We recorded our first album without much prior knowledge of the songs. They formed themselves. We’ll never be able to play a song live identical to the recording and that’s how it should be.

JV: Our first recording was done at James G’s basement studio, which doubles as our practice space. It was a very comfortable environment.

Some of the songs we’d been kicking around for awhile, but with loose structure and areas of improv. Some were recorded on the spot with no forethought, just building on a vibe.

Q. Which new bands do you recommend?
JG: Not exactly new, but Minami Deutsch.

JN: They aren’t brand new, but I really like Cave and Spray Paint.

Q: Which band would you love to made a cover version of?
JG: I would love to cover “Crest” by Stereolab.

JG: I’d suggested “Blitzkrieg Bop” before. I liked the idea of turning a straight-forward song into a motorik drone. I think a Joy Division or Stereolab cover would be fun, or something completely opposite of what we do sonically, like Shellac.

Q: What are your plans for the future?
JG: Writing and recording.

JN: For the near future we’re focusing on recording new music.

JV: Currently we are working on the next record. Also, our first record is going to be coming out on vinyl later this year on the German label Tonzonen Records (tonzonen.de). We are excited to be working with the folks at Tonzonen on the “Aktivität” re-issue and maybe more in the future.

Q: Any parting words?
JG: Thank you very much for this opportunity, I am always blown away to find out others are interested in our rural Kentucky noise. Truly appreciate it.

JV: Thanks so much for the interview. Hope all is well and we look forward to the future. If people want to keep up with us, our website is attackanddelay.com
*
*
*
Thanks