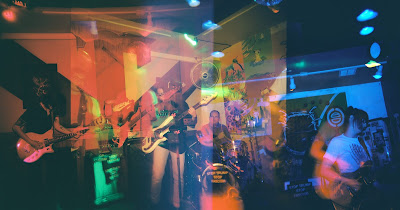 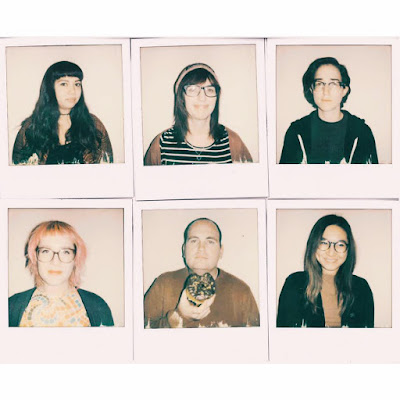 Q. When did Aster More start? Tell us about the history...
Aster More began in March of 2016. Carolyn was looking for someone to sing harmonies and learn keys for a band she already had formed, and Kristine showed interest. That band end up falling through, so together they reached out to people to form Aster More and used a local event, First Time’s the Charm, as a goal for a first show. First Time’s the Charm is an event that’s mission is to add diversity to the scene, as well as give people a chance to feel like they can play music if they never have before. Requirements for playing the show include: 1) Having someone who identifies as female, LGBTQ, or a person of color in your band 2) Having someone who has never played their instrument before in your band or 3) Having someone who has never played in a band before. Everything kind of clicked with us, and the show was a ton of fun to play. We’ve been making music together on a weekly basis ever since.

Q: Who are your influences?
I’d say it’s different for all of us. We’re all influenced by female musicians, whether they are our friends, or someone we grew up listening to. Some favorites are: the Nightblooms, Helium, The Breeders, Karen O, Dolly Parton, Bjork, St. Vincent.

Q. Make a list of 5 albums of all time…
Once Upon A Time - Donna Summer
And the Glass Handed Kites - Mew
Marquee Moon - Television
You Forgot It In People - Broken Social Scene
Dookie - Green Day

Q. How do you feel playing live?
Carolyn: very out of body
Rachel: “I hope I don't drop my pick”

Amanda: numb, I kind of black out


Q. How do you describe Aster More sounds?
Very loud. We have a lot of songwriters, so our sounds vary from song to song. We've been described as shoegaze punk.

Q: Tell us about the process of recording the songs?
After our first show, our friend Dave offered to record us at his house. We spent a weekend recording with him.. It was a super hot summer, and we recorded in the basement during the Olympics.

Q. Which new bands do you recommend?
Marge (who were touring with this April), Doug Wartman, Big Nothing, Preen, Cabbage, Eight, Empath.

Q: Which band would you love to made a cover version of?
We’ve worked on a cover of the Cranberries for a while, but they play super fast. Maybe Van Halen.

Q: What are your plans for the future?
For now, we are working on writing new material to release a full length. We want to play smaller tours, and continue playing our music for as many people as we can.

Q: Any parting words? Thanks again
Fly us to Brazil! We’d love to play.
*
*
*
Thanks