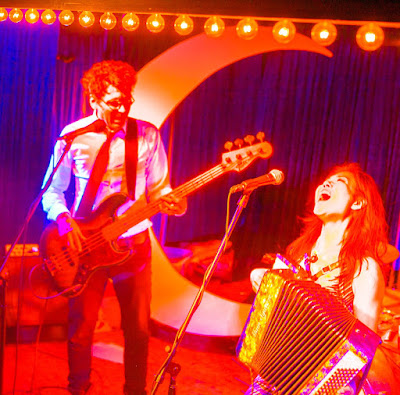 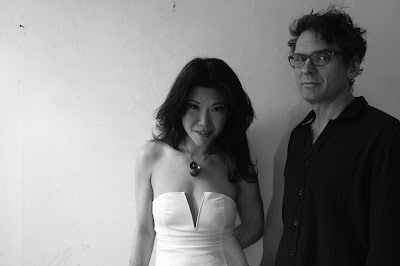 Q. When did Lusterlit start? Tell us about the history...
SUSAN: Lusterlit began in 2016 when Charlie and I started playing our songs written for Bushwick Book Club as a duo. Bushwick Book Club is a literary/musical crossover event that presents new songs inspired by books. I started it in 2009 and Charlie's been a contributor for the last several years. Between the two of us, we have a kazillion songs about books as the shows are approximately monthly, using everything from Flaubert to Nabakov to Dr. Seuss as inspiration for new songs. Local and touring musicians from all genres participate each month. It's musical nerdery, but we like it. It's fun to work from common, external source material. Somehow you give yourself more freedom and there's a lot of experimentation.

CHARLIE: I produced Susan's collection of Vonnegut inspired songs And began recording my own album of book club songs. At the same time we began backing each other at book club shows and our arrangements of the newly written songs were flowing from our performances. By the time we had our releases ready we'd decided a duo was a great vehicle for us and we booked a release show and a tour of the west coast. When we got back from the tour we jumped right into recording and that became our latest release LIST OF EQUIPMENT.

Q: Who are your influences and the concept for the project? -
SUSAN: Oh... just mentioned a few authors, but recent ones on the newest recording are Cormac McCarthy (BLOOD MERIDIAN), Julia Child (MASTERING THE ART OF FRENCH COOKING), Jonathan Lethem (THE FORTRESS OF SOLITUDE). Musically, I'm influenced by the blues and blues-based music, old soul and Motown mostly I suppose. Also Cole Porter and standards. Really though, you don't know what you're going to pull on when you're writing a song inspired by a book. It can be anything. I've beat-boxed for Book Club songs. Did you know Charlie wrote a rap song for our GEEK LOVE show last year?

CHARLIE: I'm always surprising myself lyrically by the songs inspired by books like Killer Angels, Vonnegut's Galapagos even the tacky Tesla Bio we read last summer. Musically I feel like our influences come from all over from Nick Drake, to ELO, to Eurythmics to Pj Harvey.

Q. How do you feel playing live?
SUSAN: I feel great. Ha. I mean, I feel the songs. I like that about playing live. I like that when we're playing, what you feel are the songs, and not much else. I get pre-show doom and sometimes post-show doom and sometimes pre-show and post-show doom, but while playing, usually what I feel is just the song. And it's always the funnest to hit something. I love that I get to play my Korean drum so much in this duo.

CHARLIE: I really love being in that moment in the room when everything is suspended and everyone is experiencing the song just as it's flowing through us. As we back each other up, allowing each of us to take chances and reveal the emotional charge of each song. Playing as a duo brings so much focus to the smallest details. So by playing the songs a lot, we find all sorts of little nuances of dynamics and tempo to explore and bring out more light and shade in the songs. I think that's so exciting to do as a team.

Q. How do you describe Lusterlit sounds?
SUSAN: I would say the Lusterlit sound is varied, but Charlie makes everything sound good. So to me it's some version of good. Charlie? I think Charlie's better at describing these things...

CHARLIE: I think we instinctively bring a colorful approach to arranging our songs about books. Cinematic but not theatrical. Because we have such a wide variety of musical influences it allows us to just play in the sandbox when we're coming up with ideas and they combine to create something that's timeless with modern things mixed in.


Q: Tell us about the process of recording the songs ?
SUSAN: The process is, Charlie and I get together, and we see what comes out. Sometimes we have a clear idea ahead of time of how to go about things and what we want, but sometimes we don't, and we just show up and see what happens. That's exciting too. We usually each have our own basic song with lyrics that we come to the studio with but how we flesh things out for the recording are often improvised that day and over a series of days. We co-wrote our first song together for a show at Bushwick Book Club Seattle, and that was interesting and exciting too. Charlie came up with a riff, and I said, can that be meaner? And then can the nice part go here? And he improvised, and I recorded things, and I improvised, and I stared at words, and we carved this song out together. It's the first track of the new EP -- CEREMONY inspired by BLOOD MERIDIAN.

CHARLIE: Our arrangements usually begin with the foundation of our duo arrangements from our live performances of the songs. It's a gift that the songs get to have a little trial by fire with the Bushwick Book Club before we get in the studio with them. That period of refinement brings them some life experience that becomes a springboard. Then we get to have fun bouncing off that energy with our spontaneous ideas in the studio. It's like they give something back to us when we are recording; they have secrets that get revealed at different points in time and we get to witness it.

Q. Which new bands do you recommend?
SUSAN: I recommend Frank Olson and the Olson Twins in Brooklyn. That guy's voice and songwriting has a trueness to it that always hits me as unwavering.

Also, I love my friend Leslie Graves' songwriting. And we both sing in Julie Delano's band, GOLD. Also, I adore ENDLESS ARROWS which are the songs of our other genius friend, Julie Lamendola. DANYDANY in Los Angeles is coming out with a new recording soon as well, and they are just so inventive and emotional. I love them so.

CHARLIE: Yes lots of great music happening in Brooklyn. I just discovered a band called Howth that make really powerful and imaginative pop music with great singing and dreamy and edgy guitar and powerful rhythm section fireworks. The band Mindtroll are geniuses at all-out fun and truth in the guise of fuzz bass and accordion fueled punk rock. In mainstream music, I loved the Solange release. She brings a delicate but deeply powerful touch to her R n B.

Q: Which band would you love to made a cover version of?
SUSAN: Sparks. It's my favorite band. ANGST IN MY PANTS is one of my favorite songs of theirs.

CHARLIE: Well there are some literature inspired songs by artists I love out there. Bowie made a whole musical based on 1984 and was denied permission by Orwell's estate and the result was the album Diamond Dogs so I'd love to play something from that at some point.

CHARLIE: We're really looking forward to making music videos for our songs from List of Equipment, and after that, we have lots more material that we plan to keep releasing and recording. We look forward to traveling and bringing our songs about books to other places in the U.S. and abroad.

Q: Any parting words?
SUSAN: Thanks for asking us questions! It's been fun talking... Thanks for listening to our music. Thanks for caring about music enough to write about it. I love that your love of music helps to spread it around! More ears for more music... win win and win.

CHARLIE: It's been great talking to you Renato. The Blog That Celebrates Itself has been such a great place to learn about all kinds of music with heart and imagination. I know it's a labor of love for you and we appreciate the wonderful energy you put into it. Thanks for asking us to take part!
*
*
*
Thanks