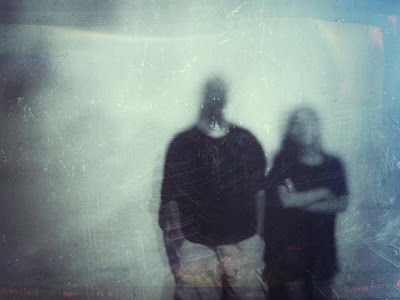 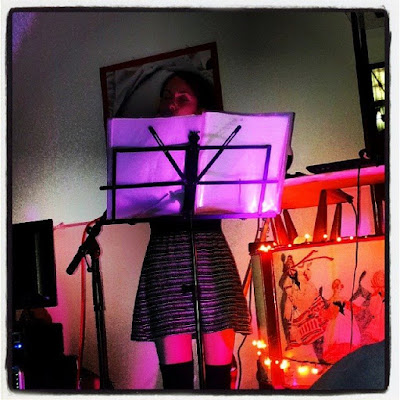 Q. When did Dear Baby Deer start? Tell us about the history...
G: We started at the end of 2013. I was Living in Finland back then, and the long winter nights, the amazing nature, and the Deer-shaped Christmas lights and decorations around my neighbourhood gave me the idea for a Band’s name. At that point, I needed to make music and make it happen. However, I did not want to make music on my own, and I knew my best friend’s fiancee (Lilia) was doing her own stuff already, so we got in touch, I asked if she wanted to be part of a new project and we recorded a song (“Gone”) to see what could come out of it. By the time we had left the studio we were already making plans to conquer the world, and it was too late to go back. :)

Q: Who are your influences?
G: I oscillate between hard and soft periods. I started buying tapes and records when I was a little kid, in the mid-1980s, and I was deep into hard rock and metal, then i moved onto dark and alternative sounds during the 1990s, and then mixed it all up together from the 2000s. So, to give you some names, I'd say: basically much of what 4AD published in the 1980s, then.... Red House Painters, My Bloody Valentine, Low, Spiritualized, Husker Du, New Order, Bauhaus, Cure, The Smiths, Ryan Adams, Sparklehorse, Mazzy Star, Curve, Jesus & Mary Chain, but also harder stuff like Celtic Frost, Ac/Dc, Van Halen, Royal Blood, Venom, Black Sabbath, Misfits, Motorhead, Burzum, Sepultura (yeah, Brazil rocks) and then, on the side.... ambient-drone bands, with more ethereal sounds, things like: Stars Of The Lid, Main, The Dead Texan, Windy and Carl, Sigur Ros.

Lilia: My influences are pretty much summed up by my favorite 5 albums (below):

Q. Make a list of 5 albums of all time...
G: Damn, this is hard. Well, in no particular order, I'd go with the ones I keep listening to in their entirety, even 20-25 years after buying them. So:
Husker Du: 'New Day Rising'
The Smiths: 'Strangeways, Here We Come'
Spiritualized: ‘Let it come down’
Van Halen: 'Women And Children First'
Everything but the Girl: ‘Walking Wounded’

Q. How do you feel playing live?
G: I like it, though we did not have much of a chance so far, just a handful of concerts, because we've been busy with work, study and, in the case of Lilia, also other musical projects. We have now finished preparing a new live set, stripped down with minimal sounds; we rearranged almost all the songs, so they sound like and upgraded version of the EPs and singles we published so far, very effective. I personally love the chance of playing in old settings, like churches, or old clubs, a place where people can have enough space and silence to enjoy the music. We'd love to play Brazil for sure; top of the list!

Lilia: Naked, scared, confused, mesmerized, beautiful and ugly, paranoid, possessed, safe and weak at the same time. Oh, and it depends on the audience. Also, everything has to be dark, because I hate bright lights while I play.

Q. How would you describe the sound of Dear Baby Deer?
G: Uhm... the short definition could be "alt-dark-pop". Better yet, it is as if The Smiths wrote an album in the tone of ‘Pornography’, or ‘Faith’, by The Cure, and then gave it to, say, Low, to record it. The longer explanation is this: I think of any of our songs as... a sandwich, really; something built on layers. I'd say there's a consistent base of drums and bass sounds that comes from dark influences (albums like the cure's pornography, or the early stuff from Killing Joke and Depeche Mode, Bauhaus... but also more recent stuff, like BRMC, or Sparklehorse. Basically, on most of our songs, there are a lot of drum parts that are played with double toms or two different bass drums, to give them more depth), then, there are multiple layers of guitars, and that owes a lot to people like Johnny Marr, Red House Painters, Spiritualized, and The Cure as well (sometimes people forget what a hell of a good guitar player Robert Smith is), then, on top of all this, various sprinkled effects, voices, reverbs, stuff you may associate with more 'shoegaze' sounds, so: My Bloody Valentine, Cocteau Twins, JMC, Curve. If you mix it all up, something entirely new comes out and that’s the sound of Dear Baby Deer.

Lilia: I’m going philosophical on this one. I’d say it’s the the encounter of two very similar and introverted people, who are able to communicate fluidly when they play or record. We’re both musically self-taught so we do not do music in a “canonical" way, and yet we can understand each other and create our special sound.


Q: Tell us about the process of recording the songs ?
G: For the first two EPs, I came up with all the songs, the musical part; then I sat down, recorded all the instruments, and started working on the lyrics. When they were sort of ready, Lilia came in, and in the process of learning the words and the melody... she kinda turned them into her own thing. The first EP was pretty much her vocals only. I started singing more consistently with the 2nd EP and we found out that having two voices made the songs unique, better than having simply a female voice. Lilia had to insist and persuade me, but it was a good idea. Lilia also adds other vocal harmonies and choruses in the background, and sometimes little piano notes. It’s stuff one may not notice soon, but it gives the band its unique sound. I usually feel the song is 100% complete only after she adds her share. For the new singles, and for the songs that will come in the next months, the process changed a bit. We sat down at Lilia's home, and we tried to make the music come from both of us. In any case, after a song is 95% ready with music and vocals, we let it sit there and do other things (yeah, it's a bit like making wine); we work on the cover, or a video, or simply go back to our lives, and after a while we return to the song after a few days (or weeks) and finish it, working with hindsight, so to speak. We feel that if you put a bit of time between a demo and the final version, you have the chance to spot a lot of little things that can be improved.

Lilia: As for me, I spend hours searching for a sound that tickles me, then I create the beat and then record a melody that has no words, only sounds (that I transform into texts later). I tried to write a text before creating a song, and even that worked, sometimes. But mainly it is the first sound that triggers something and then I know what the song will be about. I record demo tracks in a small studio in my house for my own music, and this is also where some of Dear Baby Deer’s latest songs were born, then we refine, mix and master the whole thing in the studio of two Italian producers - and friends - who work under the name ‘ Trixity Productions’.

Q. Which new bands do you recommend?
G: I used to love a semi-unknown band from... Spain, I think, called Shogun. They sung in Spanish, though their lyrics are barely audible, kinda MBV style. I think they no longer make music, at least I could find none under their name recently, but they are absolutely great. Other than that, I think there’s a band, called “Vibrissae” which is on your label’s Cure tribute, and they did a great job there. Oh, and, a band you’ve also featured on your blog: Bondage & Discipline, they seem to make excellent music. Great name, too :)

Q: Which band/artists would you love to made a cover version of?
G: Way too many. I have this dream of making a series of cover albums, one dedicated to hard rock stuff, one to Motown songs, one to pop songs from the 1980s and one from songs from the 1950s. There are so many good songs that have a great structure of harmony and melody, chords and lyrics and could be rearranged with our sound, toned down, slowed down, expanded with multiple delays and reverbs. On top of my head, some names: Marvin Gaye, The Supremes, Aretha Franklin, The Police, But Also Motley Crue, Kiss.... Fundamentally, stuff that is very different from what we do.

Lilia: Not sure. I think I’m very bad in making covers :)

Q: What are your plans for the future?
G: We have just published two singles ("Thin", and "End of the Rope") between May and August 2016, we also have a video out right now for "End of the Rope". We now have another 6 songs that are 90-95% complete, and could come out as singles during the winter. One possibly in Fall, if we find the time to put the final touches on it. BBC northwest radio in the UK is passing some of our songs, which is good, and we plan to make a couple of dates over there in the next months. We also have a full-length album in the making, and we have the most beautiful title for it already, so that’s a good start.

Lilia: Agree; we’re aiming to refine DBD live set as much as we can, and give space to the ideas that we collected, to turn them into a brand new work by DBD.

1) I really want to visit Brazil. Starting from...the south, say.. Florianopolis and surrounding areas. Don't know exactly why, it's just a hunch. Doing my best to save enough money to get there in 2017, possibly as a reward when I'll finish my PhD.

2) Always be kind to animals (and anyone who's helpless and voiceless), and if possible, adopt one.

3) Stay classy, work hard and don't give up.