Early Sunrays with The Royal Landscaping Society - An Interview 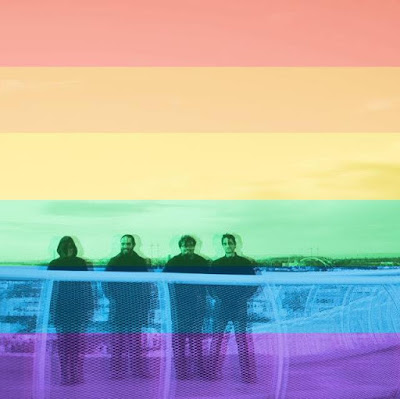 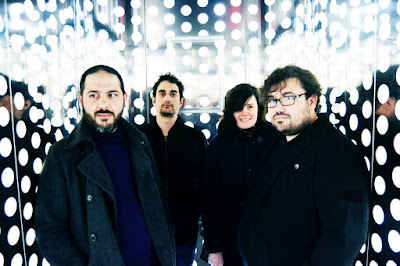 Q. When did The Royal Landscaping Society start? Tell us about the history...
I was playing in a band before called Sundae, which was kinda shoegazier in sound and where I mostly played guitar, arranged and produced. We had a string of releases I'm very proud of, but I was starting to feel a bit stalled, like I wasn't completely doing the kind of music that I wanted to do at that time. I also wanted to sing again, so decided to start a sideproject just by myself, and that ended up in song for a compilation on Little Treasure.

Then I got an offer to play in a house show, so I just asked a couple of trusted friends who I had played with before to join me, and we started preparing a proper set for that gig, and that's how the sideproject became a full band with Fran on guitar and María on keyboards (I did vocals, guitars and programming). We were joined by David on bass a few months later. Eventually I realised that I didn't want it to be the sideproject anymore and focused on The RLS completely, and it's by that time that we released our first album in 2014 and got to play in the UK twice, Birmingham Popfest and Indietracks. It was all a dream come true, first because of the experience it all was, but also because it's the time that I've felt "This is what I was meant to be doing all my life".

After that, Fran left to work in Hong Kong and Juanlu took his guitar duties a couple of years ago, and that's the lineup that's working on the new songs and the new gigs. We've been lucky to have lovely times playing live this year, such as the Verbena Pop gigs in Cologne and Berlin, together with our friends When Nalda Became Punk and Linda Guilala, or then again with WNBP in Barcelona for the Hi Jauh USB! gang.

We have also contributed a new song to the recent Bekolympcs compilation on Beko (also the label that released our first album) and that's out right now!

Q: Who are your influences?
I think we really wanted to sound very close to the spirit of our Sarah heroes, particularly Brighter, The Field Mice, Aberdeen, Blueboy. And even more from a couple of bands that came from there, Harper Lee and Trembling Blue Stars. But of course we bring other influences there, there's also a lot of New Order and very obviously The Cure too. There's bits of the JaMC or Slowdive, or even St Etienne, Kraftwerk, Stereolab...

Q. Make a list of 5 albuns of all time…
It's quite difficult cause a lot of the stuff I love is single/ep based I guess! But If I have to choose five, it'd probably be:
The Cure's "Disintegration",
The Beach Boys' "Pet Sounds",
Trembling Blue Stars' "The Seven Autumn Flowers",
New Order's "Lowlife",
Slowdive's "Souvlaki",
Harper Lee's "Everything's Going to be Ok",
My Bloody Valentine's "Loveless".

Q. How do you feel playing live?
We really enjoy it. I guess I prefer to write and record but playing live is fun in a different way. I think we can still get much better live (particularly my voice could sound much better) but we're not doing bad at all. Still, it's the recordings that really reflect what we want to be known for.

Q. How do you describe The Royal Landscaping Society sounds?
My friend Marc Elston made the best description and it stuck really: "shimmery romantic pop". If you want me to get a bit more descriptive, it's a mix of guitars and electronic instruments, and we do love our choruses, delays and reverbs, but it's all mostly clean sounding, with few, simple elements, and quite melancholic most of the time (but not always).


Q: Tell us about the process of recording the songs ?
We record at home, and we normally demo stuff, then take it to the practice room and then record definitive versions, though sometimes we've finished songs and then had to learn them to play them live. I have my recording gear set up in a very small room these days so half out of necessity, and half cause we really like how it sounds, we're not using amps or even amp sim plugins on the guitar sounds, it's all direct, but using certain pedals like chorus and overdrive. It kinda helps it all sound a bit New Order-ish I guess, and then a bit of delay/reverb is added when mixing to give it all a bit of a hazier sound.

I often mix and master other bands, but I don't really obsess over sound quality with our stuff though, cause I don't want it to turn into work. So when recording and mixing we try to make it all work quickly and simply, and focus more on having songs that work than anything else.

Q. Which new bands do you recommend?
I must confess I'm listening to very little new stuff these days! Still I was very lucky to have the chance to mix Terry vs Tori's first ep, we really need more bands like them here!!!

Q: Which band would you love to made a cover version of?
We're cover junkees! We've done Brighter, The Field Mice, Etienne Daho, McCarthy, and very recently we recorded a Softies cover for a lovely Rose Melberg tribute that's out on February Records next month. I would love to prepare one by The Cure as we've played Cure covers most bands I've been part of and probably I'd love to play "Catch" this time.

Q: What are your plans for the future?
we are working on a comp contribution and a 7" single right now, hopefully to be out before the year ends, and our second album should be out in 2017, everything on a wonderful label that I've loved over 15 years so needless to say I'm overly excited about it. Also we managed to trick our fried Roque from Cloudberry into wanting to release a 7" by us so that should happen too in the next months. The problem is I'm the slowest songwriter in the world, but I promise I'm trying to get better, and I have three bandmates who make sure I don't stay sleeping!

Q: Any parting words?
Thanks a lot for the interview!! It was a pleasure indeed! Hope we have news for you very soon.
*
*
*
Thanks