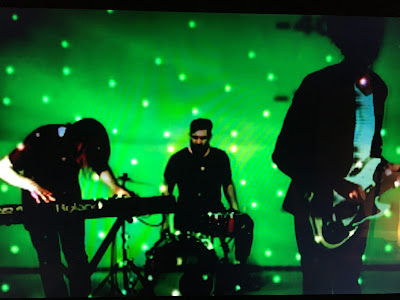 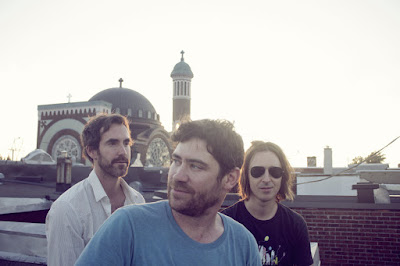 Q. When did Pang Attack start? Tell us about the history...
Pang Attack was my home-recording side project when I was playing in my first band, a shoegaze-indie rock outfit called KTL - we were together for about 7 years and and did pretty well, touring across Canada and the eastern U.S. quite a bit. Around 2008-09 I started jplaying around with Garage Band and making these little demos, more out of curiosity and a desire to learn about how the software worked. Eventually KTL broke up but I still had a strong desire to make music, I felt like I hadn't maximized my musical potential yet. So I went into a friend's home studio, a really modest space, and there I recorded the first 2 Pang Attack EPs, Dreamer's Drug (2011) and Phantom Forest (2012), playing all the instruments myself. Those are very mellow EPs and I think you can tell it's just one guy, all alone. Then I brought Yann and Dave in, and Pang Attack became a real band - our 3rd EP Sleepy Fell Down (2015) was recorded as a trio - and again, I think it's noticeable - a song like The Jaguar has a really heavy groove, and that's courtesy of Yann, our drummer. And then came North Country Psychic Girls, our latest and we went pretty big for that - we recorded at Breakglass, a well-known studio here in Montreal, and brought in a string quartet and trumpets and saxophones. It was a really fun album to record - and so yeah, now here we are, in September of 2016.

Q: Who are your influences?
Always a tough question - I think as a band we've been pretty flexible in our sound, ranging from shoegaze to slightly electro chillcore type stuff to more conventional melodic indie rock - for the first few albums I'd say bands like Yo La Tengo and Pavement were an inspiration, but we don't necessarily sound anything like them. The new album has more of a motown and crooner vibe - so for that, I can cite Nick Cave, Morrissey, and older guys like Lee Hazlewood, and Scott Walker. There's a pretty pronounced change of style on North Country Psychic Girls.

Q. How do you feel playing live?
I've always had a complicated relationship with performing. I've bever been super-comfortable. When I first started playing shows in KTL, I had terrible stage-fright. For years I felt acute anxiety before and during shows. Consequently I've had some terrible shows. But lately, I've mellowed - I've learned how to perform a little more, how to stay calm on stage and project into the audience, try to grab them. It's taken me a long time to learn.


Q. How do you describe Pang Attack sounds?
It sounds like the inside of someone's head. That was the point for the first 3 EPs - I'd describe them as very instrospective, mellow, floaty - basking in a sunlit orchard, high on hashish, you know? Dark and light clouds around your head. The new album is more energetic, but still the lyrics are quite dark. Hopefully Pang Attack takes you far away from yourself.

Q: Tell us about the process of recording the songs ?
See the answer to question 1

Q. Which new bands do you recommend?
They're not that new, but everyone should hear Suuns. There's a band out of Chile, I think, called The Holydrug Couple that I like alot. Yonatan Gat. Timber Timbre. Allah-Las. Vesuvio Solo.

Q: Which band would you love to made a cover version of?
I'd love to do a lounge cover of My Bloody Valentine

Q: What are your plans for the future?
We have so much music that we have to record! Our plans are to keep trying to make the most beautiful song we can - of course, we'll never get there.

Q: Any parting words?
We'd love to come down to Brazil one day! Hopefully we can make it eventually. And say hi to Rodrigo Amarante, if you know him. He's awesome :)
*
*
*
Thanks