Love is the Dealer with Rich Girls - An Interview 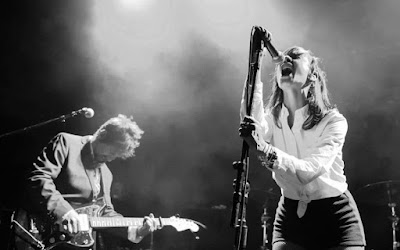 
Q. When did Rich Girls start? Tell us about the history...
Rich Girls started as a solo project when I was living in London a few years ago. It was just me demoing songs on Garageband. But I didn't think a lonely solo project would sound interesting to people so I called it Rich Girls to make it sound like it was a real band.

Q: Who are your influences?
British punk and west coast radio pop. I learned a lot from 80s punks. But I grew up in California so pop was big for me too. Bryan Ferry, The Beach Boys, Iggy Pop. Those are the spiritual godparents of Rich Girls.

Q. Make a list of 5 albums of all time…
Pet Sounds - The Beach Boys
The Pretenders - The Pretenders
Appetite for Destruction - G n R
I'm a Loser - Doris Duke
The Cure - Faith

Q. How do you feel playing live?
It's a form of devotion. I play dead sober. Also we've been playing a few shows as a two-piece because our guitar player is on the west coast.
And that's intense because there's nowhere to hide. Which I like.


Q: Tell us about the process of recording the songs ?
I have a very specific sound in my head so I write all the music and usually demo it on Garageband first. And then I'll bring it to the band in rehearsal and we'll build from there. Sometimes though I'll hear our drummer Gavin playing a beat that sounds great to me and we'll write something on the spot.

Q. Which new bands do you recommend?
Moon City Boys from Sweden. We played with them last year when they first toured the U.S. Cool band.

Q: Which band would you love to make a cover version of?
We do a dark and down version of Born to Run. Sort of a Jesus and Mary Chain take on Springsteen. I love singing it live.

Q: What are your plans for the future?
Our new EP comes out in September and we're playing shows in NYC and the east coast. And then recording again before the end of the year. I've been writing.