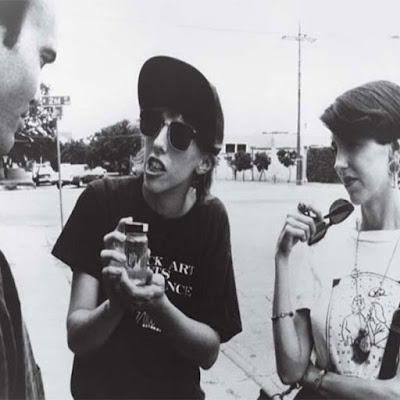 
Q. When did Slackers ☂ start? Tell us about the history...
Roma: We started two years ago, when Andrei and Vanya were hanging out at Andrei's apartment for several days, drinking beer and listening to music. And the final point of their do-nothing was starting a new band. They wrote several songs, called me by the phone and told that I will be their drummer. I wrote one song and we released our first EP "мне скучно" ("i'm bored") in a day or two. And we began to perform at the moment, our first gig was just two weeks later. I was thinking of it as a joke, but we're still active, touring from time to time and always writing new material.

Andrei: 'kitchen punk' as a lifestyle.

Q: Who are your influences?
Roma: 60's pop, garage-punk and psychedelic, twee bands from 80's especially Beat Happening, Black Tambourine and so on, it can take hundreds of hours to continue.

Andrei: ariel pink first 5 albums. Don't know, its too difficult for me.

Q. How do you feel playing live?
Roma: It's always rather nervous, cause we can't play our instruments really well haha, but it's always fun (when we are not drunk) and people like it. We play a lot in Russia, had a couple of tours, visited many cities from St Petersburg to Siberia, in summer we played in Mongolia at Playtime Festival - and it was cool everywhere. But I like to play at small venues rather than big stages.
Andrei: I feel cool everytime!

Q. How do you describe Slackers ☂ sounds?
Roma: It's hard to tell because we stand at the threshold of change now, most part of last year there were only a two of us (me and Andrei) in a band and we sounded like college rock or twee punk. It was interesting trying to make more sound as a duo, we had only one guitar, drums and two our voices playing live. But now we need to change something, to evolve and we are looking for one or two musicians to make something new.

Andrei: We sound like bad noise. In a cool way. We love student rock like beat happening or something. And we still do love home-recording, home-painting, home-photographing, any-other-home-production and all the DIY esthetics.


Q: Tell us about the process of recording the songs?
Roma: We always recorded at home. On our first releases we recorded apart, each recorded his songs on his own laptop or portastudio and then we released them together as Slackers ☂. Our last album "Не буду этого помнить" ("I won't remember this") was recorded at Andrei's home, where Slackers ☂ started. I spent about a week there, we worked from dusk till dawn everyday together and that seemed to be much cooler for me than working apart. And our recordings differ from our live sound because we have no limits recording on laptop, there're rather more sounds that we can do on stage.

Q. Which new bands do you recommend?
Roma: It would be easier for me to name new Russian bands I like because the scene develops with a crazy speed here: Nikola Tesla & Thee Coils, Mango Tweedlight Academy, Autistic Nursing Home, Architecture Vigilante Orchestra, Bong Rips, Shokalsky Revenge, Продавцы-консультанты, Отстой, Рука Дочери, The Borises, Женя Куковеров, Сердцедёр... Sorry if I forgot someone. You can find some of them here for free: http://pomogitecommunity.bandcamp.com. If we speak about other countries, I can tell about Dumb Doctors (US), The Fat White Family, Spaceman (Australia), Damaged Bug, Jack Name, Morgan Delt.

Q: Which band would you love to made a cover version of?
Roma: There are lots of such bands, to be honest. I listen to music everyday and often imagine how we play one or another song. Maybe The 13th Floor Elevators, but it's very hard to do their song well. For last
several gigs we played "Cast A Shadow" by Beat Happening.

Q: What are your plans for the future?
Roma: We're going to record the best album ever.

Q: Any parting words?
Roma: Live and never forget that you're not the only one on this planet.