Plume with Scarlina - An Interview 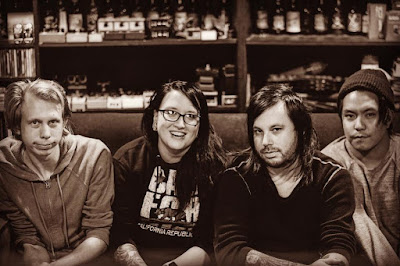 "nothing for me here.
here, now.
nothing left to fear.
here, now.
waiting for you dear. " 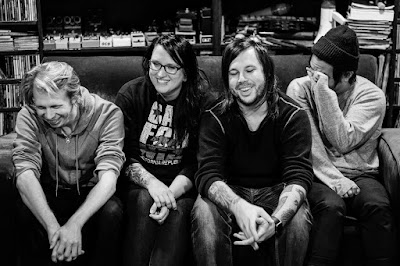 Q: Who are your influences?
Placebo, Hum, Smashing Pumpkins, My Bloody Valentine, …And You Will Know Us By The Trail of Dead, Radiohead, Slowdive,

Q. Make a list of 5 albums of all time…
Kid A - Radiohead,
In the Aeroplane Over the Sea - Neutral Milk Hotel,
Spiderland - Slint,
In Utero - Nirvana,
Without You I’m Nothing - Placebo

Q. How do you feel playing live?
I kind of feel nothing playing live. Like I’m isolated from everything else. I don’t notice any one in the band, or anyone around me. I try to get lost in the volume. I sort of want to be on cruise control and exit my body and come back when its all over.

Q: Tell us about the process of recording the songs?
We spent a lot of time in pre-production. Every song sort of came about a bit organically either through a practice jam, or I would come in with parts that we would arrange and polish. We record every practice, and have an archive we pick through for little gems. When there was finally a body of work we wanted to record the only person that I wanted to work with was my old friend Jack Shirley at Atomic Garden Studios (http://theatomicgarden.com). He has recorded Deafheaven, Loma Prieta, Oathbreaker, Punch etc. And him and I had a very specific game plan. I told him I wanted to do tons and tons of guitar tracks, and just build the songs from the ground up. One day we met for lunch to talk strategy, and he called me a couple hours later to tell me he bought a plate reverb, and he had to go pick it up in LA. It turns out it belonged to John Frusciante, and there is a crazy story about having to lift this 400lb box out of a mansion window.

We did a live take with everyone in the band playing at once. This is how the majority of the drum sounds and bass takes were laid down. Then Justin and I would do another take on guitar playing with each other in a room. This process took a day, and then I spent an entire day recording guitar tracks, just adding layers and layers. We added most of the other sounds/samples/pianos/synths etc in a couple hours. Then we took a bit of time off, mostly for me to figure out exactly what I wanted to do vocal wise, and I generally wrote the lyrics right before I went into the booth to record them. Lindsey and Myself did two vocal takes for each song, then we spent a long, long, long time mixing, remixing, and finally mastering the songs. The whole process took like 6 months. But I am pretty proud of the end result.

Q. Which new bands do you recommend?
Ravenna Woods from Seattle, Grave Lake from Sacramento, From Indian Lakes, Tycho, Chelsea Wolfe, This Will Destroy You, Nothing, Au Revoir, Shy, Low, Shlohmo.

Q: Which band would you love to made a cover version of?
Joy Division or Bauhaus.

Q: What are your plans for the future?
We have one other song from the Plume sessions that we are going to put out as a split 7”. Currently writing our next ep, and are working with some visual artists to make something to look at for the next batch of songs. Probably start recording in January, and our approach will be completely different (more live feel, different recording techniques for each song, and lots more noise!!!).

Q: Any parting words?
Thanks so much for taking the time to listen to us!
*
*
*
Thanks