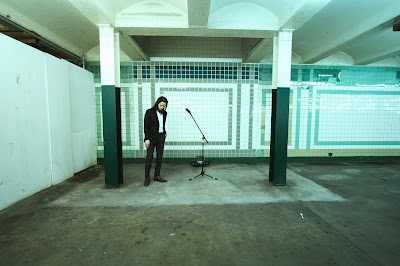 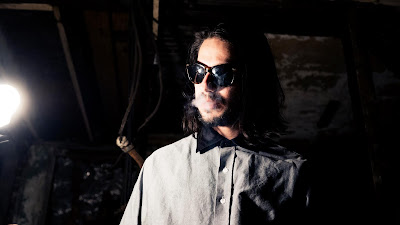 Q. When did you start to make music ? Tell us about the history...
My father was a musician--he was a terrible teacher, and would say I was a horrible singer. Eventually, I started teaching myself to play guitar when I was thirteen. Didn’t hang out with friends after school or anything. I just stayed home (I still do) and played guitar until my fingers were raw. I didn’t begin actually trying to sing until I was twenty-two. I suppose I was fed up with all the singers who’d leave my band’s, and everything would just go to waste. I’d write all the music anyway. So, naturally, I think...I just took to withstanding my own voice. Over the years, songwriting definitely became my obsession. At this point in time, whenever anyone asks me the style of music I play, I just tell them I’m a songwriter. Often times I’m associated with the word “prolific” which is flattering because not everyone can be that way, you know? But, I do my best to keep the quality just above quantity. So far, I think I’m doing alright.

Q: Who are your influences....?
I mean, there’s a broad range of influences. Musically, I grew up around a lot of Motown, CCR, John Lennon. As I got older I discovered Bob Dylan, and that lead to the list of other greats: Leonard Cohen, Tom Waits, Nick Drake, Nick Cave, Loud Reed, Elliott Smith, etc.... I could go on and on in regards to songwriters. I’m also a huge fan of composers like Phillip Glass, Moondog, John Cage. It just depends, I guess. For Grey Expectations, I was super turned on to the post-punk/noise sounds of bands, specifically Jesus and Mary Chain. So, I decided I’d try my hand at borrowing their template of noise, and write my own pop/rock songs.

Q:Make a list of 5 albums of all time…
Haha.. I didn’t like that question as soon as I saw it. Some of these are painfully obvious, but with good reason, maybe. Hmm. I mean, “all-time” is very, very broad. I kinda prefer to break things down a bit, by style/genre, BUT if I had to say, for me...the albums that had a profound impact:

Again, definitely not my ALL-TIME list, but these albums/artists have had and will always have a proud effect on me and my work. I’ll go through phases, and listen to more contemporary artists, but mostly, I’m just sifting through and obsessing over albums from the past.

Q: How do you feel playing live?
Mostly, I feel terrible. Ha. I’m not a huge fan of my voice sometimes, or if a venue has bad acoustics. I’m always a bit anxious, kinda lethargic. I prefer to write and record more than to perform. That can change, though. Right now, I’m very excited about playing the new material. I wrote and composed everything, but my bandmates...they kinda put their own twist on the songs live. It’s cool, the way it’s all constructed and then deconstructed in front of a live audience.

Q: How do you describe your sounds?
I’ve been described as a “chameleon”. This mostly has to do with my ability to adapt to a wide palette of musical stylings, I hope. Ha. Um, I don’t have a definitive style as of now. I do, in my head, but I’m kinda keeping that to myself until I’m done writing the albums I have on deck. There’s about two more albums after Grey Expectations, and then a few albums of just experimental/noise/avant-garde compositions.


Q: Tell us about the process of recording the songs?
I’ve recorded using my Tascam 4 track tape recorder. I’ve recorded a new albums using a single microphone. Grey Expectations was recorded using two. I suppose it’s nothing groundbreaking or unique. I just stay secluded indoors, and write/record. Future albums, however, I’d love to try recording using a traditional studio. It just feels so much more personal and intimate when it’s done at home, and I’m into that.

Q: Which new bands do you recommend?
Haha. I don’t know, man. I suck at looking up new band. I listened to Lemon Twigs recently. They seem to have their material together. There’s a group: Bohren & der Club of Gore. They’re amazing. I don’t know. I guess I should work on that, ey? Ha.

Q: What are your plans for the future?
More albums. More writing. More painting. More shows. Hopefully, more people listening? Maybe a record deal? Maybe, probably not? I’ll just keep doing what I’ve been doing, and make moves when I can. What else is there?

Q: Any parting words?
Listen to GREY EXPECTATIONS. Buy it. Visit my back catalogue. If you like it, any of it, email me, and I’ll send you an album free. Thanks Renato for this opportunity! Hope you all dig that album, there’s plenty more to come!
*
*
*
Thanks