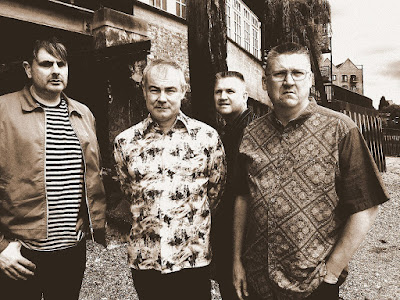 Q. Hello David, first, congratulations on the new album, it's really brilliant, what is your analysis after conclusion of album? Are you happy with the result?
A. Thanks. I think it’s the best thing we’ve ever done, not just because of the quality of the songs but also because it’s the first thing we’ve done that works as a coherent whole, rather than just being a collection of songs. The closest we’ve come before to this is with Bright & Guilty in 1989, which had a similar ‘state of the nation’ feel but was more abstract. On Untied Kingdom I think we’ve managed to capture a real sense of the current political and social unease in our country (which has parallels in the rest of the world, of course) while simultaneously being more melodic and more experimental than usual. I’m dead proud of it. There are always things I would change after finishing recordings, but there are less of them this time around.

Q. How was the process of creating the album?
A. Prolonged, but steady. We recorded the drums and some of the louder more feedbacky guitars in a couple of studio sessions, but otherwise added overdubs at home. It was great fun getting guest vocalists round to my house to record in my hall and bedroom, and engrossing trying to sync the different layers of vocal recorded on my iPhone for Apparition. It was also fun getting the files of what other people had done on top of the backing tracks when I sent them over. Sometimes these changed the feel of the songs in ways I didn’t envisage, like when Terry Edwards added the horns to My Legendary Childhood.

The LP really started to take shape when I wrote Apparition (which was just sung straight into my phone) and Across the River of Death, written while I was investigating a new tuning I’d made up attempting to emulate those West African ‘desert blues’ tunings. These songs were clearly a beginning and an end, and everything else pretty much slotted in between with very little work. It was also good to work some of the songs in live before finishing them – that gave them an edge of excitement that is really hard to get any other way. There are songs left over which also indicate a new direction, but we’ll see ...


Q. What are the main differences between "Untied Kingdom (…or how to come to terms with your culture)" and "Middle Aged Freaks"?
A. Middle Aged Freaks was always conceived as a compilation rather than a coherent whole, though the songs mostly hang together, I’m happy with most of those songs, though they’re mostly just recordings of the band playing together as we would live. That’s good, but the Untied Kingdom songs have room to breathe and fir off in all directions and hopefully on all cylinders.

Q. What were the influences for creating the album?
A. We’ve always been eclectic listeners, but the new LP pushes forward my idea that garage/punk/indie/guitar/whatever music can be just as expressive as any other form of pop music. If you really get into it, every song has tons of musical ideas bubbling under the surface, and I really worked hard on the nuances in the lyrics, giving them double or triple meanings where possible. It was important to mix electronics, samples, male and female vocals, and various extracurricular instruments into the whole, while still retaining that noise-pop edge. Andy’s use of the bulbul tarang he got off eBay on Fire in the Home is a high point for me, as are the electric violin lines that Paul Warwick added on to The Stupid Poor and Across the River of Death. The influences are more general than specific – you can hear echoes of folk, techno, 70s African music, garage punk, rockabilly and the avant garde in there, I think – all stirred up in big fruit cake. I’d like to bring more of that out in future, but we’ll see.

Q. What are your plans for 2016/2017?
A. Both Andy and myself have solo recordings almost ready, while I have a sampling/electronics project which has been long in gestation, which will either come out as a Moonshake record or something else. We’ll be playing more Wolfhounds shows, and there are several songs ready for rehearsal with a view to planning our next move. I’m open to more collaborations like I did with Manyfingers last year, and there will also be more of the acoustic shows which I started performing about a year ago.
*
*
*
Thanks