Made Out Of Suns with Superdrone - An Interview 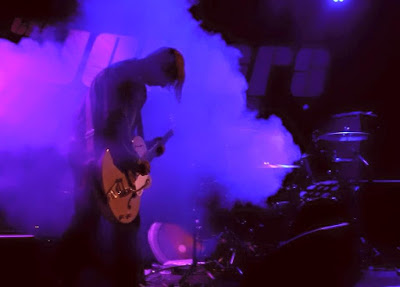 Q. When did Superdrone start? Tell us about the history...
Somehow, and I’m not sure how, we ended up in a rehearsal room to have a one off jam and ended up writing four tracks of the first album in one hour. I guess when something clicks – it clicks.

Q: Who are your influences?
Californian Shoegaze/drone like The Warlocks, BRMC, Brian Jonestown and also bands like My Bloody Valentine, Psyche Beatles, The Pink Floyd, The Prerry Things, Loop, The Verve (early), not forgetting machinery – showerfans – and anything that provides some kind of drone.

Q. Make a list of 5 albuns of all time…
Piper At The Gates of Dawn – The Pink Floyd
Magical Mystery Tour – The Beatles
Satanic Majesties Request - Rolling Stones

Q. How do you feel playing live?
Like I’m in a trance, feeling the music poor out of me through infinite electricity.. through the wires... therough the PS system into the hearts and minds of the audience and their faciel expressions poor light into me and that fuels the electricity that loops and perpetuates from the start to the end on the show. I feel like I’m truly home.

Q. How do you describe Superdrone sounds?
Fuzzy delayed psyche with a heavy helping of mysticism that could easily be missed and it’s wrapped in a familiar format and topped off with a 60’s pop arrangement bow.


Q: Tell us about the process of recording the songs ?
Other than the original jam we had, it normally starts with me going for a walk and a song coming to me, songs often hit me in their finished state, I can hear the drums, I can hear the bass – Tien raging his space-guitar – vocals and mellotrons... intro... verse... chorus... it all comes in really quick like a wave, but it’s not in real time, it’s like I can hear the song instantly and I have to stop what I’m doing and sing the parts into the voice recorder on my phone as quickly as possible - before its erased from my mind – the ideas leave as quickly as they come.. It’s like my mind is linked to this interstellar radio and every so often it finds a station but then the tuner keeps moving the music is gone. Its why I always have a voice recorder ready and armed on my phone. Often the recordings are really quick... like 30min sessions to get all the parts laid down in the simplest way possible to enable Tien to come in and apply his sonic epic-ness. The recording process is very quick and we don’t like to mess about with the track too much as we want it to be raw and retain the original spirit of how it was presented to me from the... umm... where ever the hell it comes from! Its also all about the song and not about individuals so it has really simple drums or a boring ass baseline, and the song sounds good as a result – then that’s what stays in.

Q. Which new bands do you recommend?
Right now... Pond and Gum! Ringo Deasthstarr... The Deltores... The Eves... Not all new bands but bands that people may not know.

Q: Which band would you love to made a cover version of?
The Monkees – Porpoise Song
BeachBoys - Sloop John B
The WHOLE piper at the gates of dawn album.

Q: What are your plans for the future?
To get this record up in the stores and work on the next.