Séance For Something with Pale Lights - An Interview 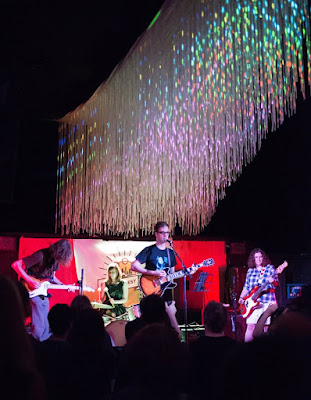 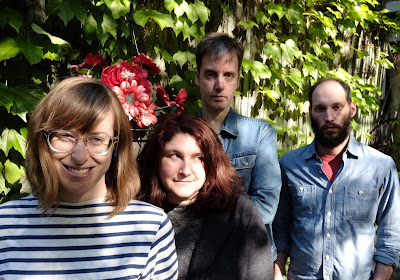 Q. When did Pale Lights start?
Tell us about the history… We started in 2011. I’m from the UK. I moved to the US in 2007, to live with my wife. I had previously played the drums in bands in the UK. Comet Gain (1992-7), Velocette (1997), Kicker (1998-2005), and The Projects (2005-7). Kicker was the first band I put together, and where I wrote songs (most of them). Kicker made two LPs for the label Track and Field. When I moved to New York, I started a group called The Soft City with Dora Lubin, and Jason Corace (A Boy Named Thor). The Soft City recorded an LP and an EP, before Jason moved to Baltimore, to teach. Lisa Goldstein and Andy Adler (of Crystal Stilts) joined The Soft City late on, but then Dora moved to Boston, to go to graduate school. So Lisa, Andy and I started Pale Lights. I decided after all this time to sing and play guitar, rather than drum. Lisa’s friend Maria Pace joined on bass. So far we’ve recorded an LP, Before There Were Pictures (2014), and couple of EPs, and a single. We’re working on an LP with our usual collaborators, Kyle Forester, of Crystal Silts, and Ladybug Transistor (keyboards), and Suzanne Nienaber, of Great Lakes (harmonies). We always record with Gary Olson (Ladybug Transistor). We’ve played the New York City Popfest twice (2012, and 2015). We play out mostly in New York City, but are hoping to play outside the city next year. We’re working on a new LP, to come out Spring 2017.

Q: Who are your influences?
The Go Betweens, The Chills, The Triffids, Comet Gain, TVPs, Kinks, Hollies, Zombies, V.U., Felt, Galaxie 500, Vic Godard. Those are mine, at least as far as this band goes, I suppose. The others may have different ideas! Movies and books too. The last LP had songs influenced by the movies Mama Rosa and Port of Shadows, the EP had a song based on a short story by Sherwood Anderson. Anything can be an influence. Sunlight. Trees. Colors. Photographs. It’s all very multimedia!

Q. Make a list of 5 albuns of all time…
There are so many. Five off the top of my head.
You Can’t Hide Your Love Forever / Orange Juice,
Forever Breathes the Lonely Word / Felt ,
La Maison Ou J-ai Grandi / Françoise Hardy,
What’s The Matter Boy? / Vic Godard,
Pisces, Aquarius, Capricorn & Jones Ltd. / The Monkees.

Q. How do you feel playing live?
Nervous mostly. Relieved when I think I’m playing OK. I do like it when a show goes well. But it does feel like wrestling a mad snake sometimes. Am in tune? Is my capo on the right place? I do like it when it goes well. We opened for The Loft, a long time favorite, at the NYC, and that show was fun. We opened for Ultimate Painting one year, and it was awful! The next time we played with them I loved it. Swings and roundabouts. You have to tread the boards now and then though. We should probably play more. We played a show with the Twerps once, and they liked us, but asked us if we had day jobs!

Q. How do you describe Pale Lights sounds?
Jangle pop, guitar pop, not sure. I think we’re better and worse than I think. I think we’re quite good. Velvet Underground beats, with Felt-ish guitars. Apparently I sound a bit like Lloyd Cole. When we played with The Loft, Lloyd Cole was at the show (he’s friends with them, loaned them guitars. I opened the door between the venue and the bar at front, and he was standing in front of me. I was going to say, ‘People say I sing like you. I can’t hear it myself.” But I didn’t. Apparently he’s a nice chap. Maybe I should have said something. I did do his song Lost weekend at karaoke once.


Q: Tell us about the process of recording the songs ?
I’m a formalist. I wrote the entire song, and bring it to the rehearsal room. The band learn it, and then, if it’s any good, we record it.

Q. Which new bands do you recommend?
Lake Ruth are very good, and have wonderful LP out. The Hairs LP is also great. And our friend Kyle Forester has a great new LP too. I have no idea about new music, to be honest! I just bought LPs by Sandy Denny and the Strawbs, Bill Fay’s second LP, The Chills Kaleidoscope World reissue, I’m still in love with Robert Forster’s last LP, the last Garment District LP has a wonderful song, Bell, Book, and Candle. I want to hear the new Ultimate Painting LP. I really liked the last one.

Q: Which band would you love to made a cover version of?
We’ve played with covers, but never dared do one live. We’ve done songs by The Chills and The Servants in the rehearsal room. Andy’s always jamming out Orange Juice, Josef K, the Go-Betweens. We are recording a Lake Ruth cover. They’ve done a wonderful cover of one of our songs, for a split release of some sort. We’re a bit behind schedule! I like playing Vic Godard and the Hollies on my guitar by myself. there was a song by Comet Gain, called Goodbye Song, a very early song by Sam and Sarah who went on to be 2/3rds of Velocette, that I like to play. I still play drums, at home. I play along to old Comet Gain songs sometimes. I’m a much better drummer now, so I play over the top of a recording, drumming how I would have done then if I could have played like I can now! I don’t do that too often though!

Q: What are your plans for the future?
New Pale lights LP in the Spring (12 songs this time), preceded likely by another EP, then a wee Pale Lights tour (Boston, Philadelphia, NYC?). We’d love to play out more. Some indiepop festivals, maybe. I’d like us to do a promo film for a song from the LP. I’ve started demoing a solo LP too. Hope to play a show in London, my old home town, hopefully with some friends. Tour Europe? The world!

Q: Any parting words?
Be creative. Do your thing. If it doesn’t work, at least you tried. Keep it punk rock, if only in spirit. DIY! Thanks for asking the questions, Renato! Good luck!
*
*
*
Thanks