Kill All The Kings with The Deathrettes - An Interview 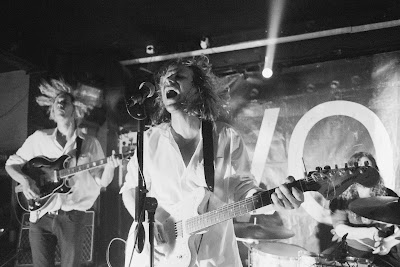 Ao lado do The Psalms, o The Deathrettes coloca a Cape Town no mapamente do psych moderno.

Q. When did The Deathrettes start? Tell us about the history...
1. We started in late 2014 when I got a guitar, Charl joined in on drums to jam some stuff that I had been sitting on for a while. Michael and I have known each other since primary school and have been jamming together since they were about 16, Michael was an obvious choice for bass. We all met Dylan through his other band, Black Lung. Dylan joined in on lead guitar and just started singing at rehearsals. We kinda just went with it and we couldn't have been happier!

Q: Who are your influences?
2. Our influences are very different, we all listen to quite a variety of music. I think that because we're not listening to the same thing, there's so much flavour coming through in each instrument. We do have a core musical genres that we all listen to, namely Garage Rock and Psychedelic Rock, but these genres have changed over time and are still changing, our taste is moving around too.

Q. Make a list of 5 albuns of all time…
3. I think a 5 album list of all time would take too long to consider but here are some of our favourites.

Q. How do you feel playing live?
4. I think we feel super energetic and pumped when we play, lots of adrenalin! and probably a little drunk too haha


Q. How do you describe The Deathrettes sounds?
5. We like to call our style of music Garage Groove. We try to emphasis movement in our music, we'd like for our music to make people dance. We're not one for labels but this feels like us.

Q: Tell us about the process of recording the songs ?
6. Kill All The Kings was recorded live in 2 days at Bellville Studios, Cape Town. We had done a few sessions of pre-production at our rehearsal studio so we had a full idea of what we were going to lay down before we went into studio. The recording session didn't leave time for experimentation as we had worked everything out before we went into studio and we were a bit pressed for time. We double tracked a lot of the guitars on the EP, we layered acoustic guitar and 12 string on most of the songs. We experimented with one or two mic positions but for the most part it was quite a traditional recording.

Q: Which band would you love to made a cover version of?
8. We like to cover songs that have a good energy. Songs that either already represents our band or we are able to play them in such a way that we are able to resinate with the song on a Rettes level.

Q: What are your plans for the future?
9. We're going on a tour in March next year in Johannesburg and Pretoria and we'd like to follow that up with a European Tour around October or so. We're working towards another EP and hopefully can get started on our LP late next year.

Q: Any parting words?
10. We currently have a funding campaign for our EP 'Kill All The Kings' on Qrates.com. We need to reach our goal of 200 pre-order records for the vinyl to hit the presses and get shipped. Fans will only be debited once we reach our 200 record goal so there's no risk. You receive a free digital download of the EP when you preorder the vinyl. You can check it out here: https://qrates.com/artists/thedeathrettes/items/12598
*
*
*
Thanks