Distant Light with Holygram - An Interview 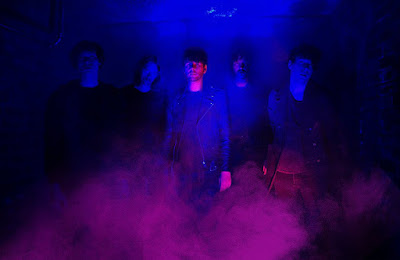 Q. When did HOLYGRAM start? Tell us about the history...
Patrick: I think that the initial spark for getting the band together was a concert of the italian group Soviet Soviet I saw back in 2014. I fell in love with the raw energy and spheric noise they were creating on stage and it made me want to explore the music scene they are loosely connected to. As a teenager I was a big fan of The Cure. I remember listening to the album Disintegration on the schoolyard on my walkman while everybody else was playing football and it made me feel „good“! The concert was some kind of flashback, a memory from a distant time and I wanted to re-experience those feelings in a much more active way. At that time I was rehearsing with my former band in Cologne in a room we shared with other bands and one day I met this guy who was just picking up some stuff. I liked his style and talked to him about my idea and if he was interested in joining the project. It was Bennett, our bass player, and we directly got along with each other. We started writing songs, experimented with different styles and instruments, searching for the sound we already had in mind. As musicians we both were coming from totally different genres, for us the project was still some kind of „terra incognita“. In the beginning we didn’t know how to make the bass guitar sound the way we wanted it to or the drum kit appear like a drum machine. After some pretty long nights in the rehearsal room we eventually succeeded…

But just writing songs and recording them was not enough. We wanted to play live and had to find a way to bring our songs in front of people. We love bands like The KVB who manage to perform their songs without a full band but that was not our idea. We wanted real drums, keys etc. without losing the sound we developed in the last months. Cologne is not so well known for its post-punk / new wave scene, so it took us a while to find the right people. Finally Marius joined on guitar, Se-bastian on drums and Pilo on synthesizers. That’s how we started to become the band we later called HOLYGRAM.

Q: Who are your influences?
Patrick: I was already talking about my first encounter with The Cure and I guess they are still one of my main influences. I am fascinated by the permanent reinvention this band went through, from cold albums like Faith to pop songs like Friday I’m in love. I think that the urge to explore different moods and styles, to keep moving and not stand still, is also immanent in HOLYGRAM.

With our EP we tried to give a glimpse of the band‘s musical range. For me personally it is an attempt to create something that is not too stuck in the rules of a certain genre. There is so much music out there I am fascinated by…it is hard to tell what really has an impact on me and my role in the band. When we recorded our EP we actually listened a lot to The Cure’s Pornography because we love the rough production but then again I am not sure you can hear any of that in our recording. I see influental bands rather as an inspiration to start with a song at all. And usually the process of writing that song takes you into totally different directions than you initially intented.

Marius: My guitar sound on some of the songs is inspired by bands I like. For example the flanger sounds of The Cure’s guitars, the soundscapes of Slowdive and the fluttering guitars of Tamaryn. For the song Distant Light I think I was pretty much influenced by the noisy guitars of A Place To Bury Strangers.

Bennett: One of the biggest inspirations for my bass playing is Peter Hook of Joy Division/New Or-der who had this kind of lead guitar touch in his bass riffs. And on the other hand there is this mo-notonic, hammering Krautrock bass à la NEU! and La Düsseldorf. In HOLYGRAM I try to combine these two elements to create something different.

Pilo: I am fascinated by melodies that trigger a certain feeling and stuck in your mind - things you hear for the first time but feel familiar with. When it comes to bands my musical base is more settled in late 60s underground stuff… Syd Barrett‘s Pink Floyd, July, Tomorrow (Rubble/Chocolate Soup). The jazzy hammond sound of Jimmy McGriff, Jimmy Smith or Brian Auger. Early electronic music by Jean Jacques Perrey or soundtracks by Francois De Roubaix. Edgar Froese did some mad stuff. Kraftwerk and other Conny Plank produced albums.

Pilo: Writing On The Wall - Power Of The Picts

Q. How do you feel playing live?
Patrick: Playing live has a certain liberating effect on me. Sometimes I don’t remember what happened on stage (maybe that is also due to the abuse of alcohol). It is a more direct, kind of brutal and primitive way of making music for me. In the studio everyone records his instrument all by himself but on stage the band has to get back together, like a tribe going to war. Control vs. intuition. During our shows I play the tambourine on some of our songs and I frequently have this giant bruise on my right leg because I keep hitting it with the ring. Performing on a stage can set different kinds of energy free, positive but also negative feelings. I think that playing live makes me experience the songs in a much purer way, it makes me feel more in general. I think that’s why HOLYGRAM for me is more a live band than a studio band!

Marius: For me being on stage is a totally different experience than rehearsing. The things that happen during a show can’t be controlled. As Patrick said you can’t control what you‘re feeling. I for my part tend to isolate myself from what is going on around me. For example once Patrick cut his nose with the jingles of his tambourine right at the beginning of a show and I actually realized only later when we went backstage that his face was all covered with blood.

Bennett: Live I play the songs depending on the mood I am in. Some of them have enough space to improvise and to respond to the audience, myself and the rest of the band.

Q. How do you describe HOLYGRAM‘s sounds?
Patrick: All five members of HOLYGRAM come from different music scenes and used to play or are still playing in other bands. Everyone adds his unique idea of what HOLYGRAM should sound like to the band. Our drummer e.g. is totally into Krautrock and bands like genre-pioneers NEU! or recent projects like Kosmischer Läufer. His style of playing drums is pretty much influenced by these bands‘ iconic beat patterns called „Motorik“. We use this rhythmic style which is more often asso-ciated by psychedelic bands and combine it with guitar riffs and basslines typical for post-punk or new wave music. It is a very inspiring experience as a band when for a while everybody is set in some sort of „trance state“ of mind but without all the flower power emotions, haha. It is a very fundamental experience. HOLYGRAM is not about doing music that has its origin in the desert and the sun-bleached area of California. I think that HOLYGRAM is the feeling you could have if you were living in a german city like Cologne: Driving and gloomy. In a way it is our attempt to be „authentic“.

Bennett: We are very sound oriented. Most of our songs are inspired by a sound we like – either from a synthesizer or the guitar – and we arrange the rest of the instruments around this sound. Sound is the foundation of our songs and sometimes it takes more time to find the right sound than to write the song.


Q: Tell us about the process of recording the songs?
Patrick: We already tried to record some songs in the beginning of the year in a studio but it didn’t work out for us. Over the last few months we developed a very clear idea of what the band is supposed to sound like on a recording and realized that we can’t give the production of our first EP into the hands of someone else than us. So we decided to start experimenting in our rehearsal room and recorded all 5 songs by ourselves within 2 months. Besides the struggle with the conditions of a DIY-production the experience of autarkic recording gave us the freedom to explore every song with the necessary dedication. It also gave us unconventional possibilties a „professio-nal“ recording would have never allowed. I have always been wondering what the motivation be-hind „auteurship“ is but I guess that’s it!

Bennett: Our writing and recording process is a mixture of concentrated sessions and a lot more intuitive jams with the whole band. Daria for example was loosely written by Marius, Patrick and me and later Sebastian and Pilo joined on drums and synthesizers and we finalized the song all together.

Q. Which new bands do you recommend?
Patrick: I already mentioned Soviet Soviet who are going to release a new album in December or The KVB. France has a very vivid music scene with lots of great bands that don’t care about genre boundaries like La Secte Du Futur or Frustration. I think there is a very interesting music scene dwelling underneath all the layers of overproduced chart music and it is worth digging a bit deeper. You might find something you have never listened to before and fall in love with it!

Q: Which band would you love to make a cover version of?
Patrick: I would like to cover a totally atypical song like Soft Cell did with Gloria Jones‘ Tainted Love. They turned a 1965 soul song into an 80s icon. Most of the people know the song because of the cover version! And then Marilyn Manson did a cover of the cover… I think that interpreting someone else‘s song is a possibility to give it a new face, but it should also be the main challenge. I am not so much into cover versions or even cover bands that sound like the original. I used to play in a 60s Garage band for almost 10 years and I am still a big fan of bands like The Music Ma-chine or The Seeds (both are coming from the „sun-bleached area of California“ btw!). I guess I would like to cover a forgotten classic from that era.

Marius: Eisbär by Grauzone. It’s the best song in the world!

Bennett: I would like to cover New Order’s Age of Consent. During soundcheck I always warm up with the bassline of this song.

Q: What are your plans for the future?
Patrick: We just released our EP on tape and as a digital download and the feedback is already overwhelming! We have a deal with the spanish label Oraculo Records who will press it as a super limited vinyl edition. It is amazing how fast some things are happening and how much potential there still is. We definitely won’t rest now, we are already thinking about recording an LP next year. I guess there will be quite some shows as well. That is all I can see from here right now.

Q: Any parting words?
HOLYGRAM: We are looking forward to playing lots of shows next year and meeting hopefully some of you out there!
*
*
*
Thanks