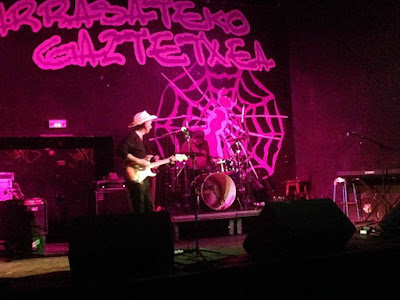 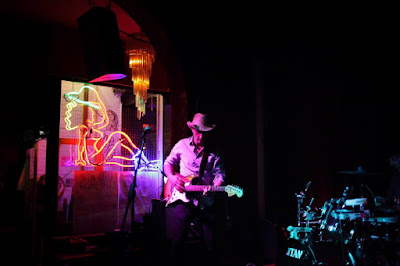 Q. When did Fraudband start? Tell us about the history...
We started playing live in second half of 2013. We’ve been friends for a while, one of use was in a couple of bands, one was in between musical projects. There were a few half completed pieces of music that got fleshed out to complete songs and that got us addicted to Fraudband.

Q: Who are your influences?
Pretty much what’s happening in our lives and those around us. We try and express these things musically in a way that makes some meaning of things that effects us. Overall we are interested a direct sound, exploring space within song structures with a loose approach as to how things can hang together

Q. How do you feel playing live?
Free and on edge, at the same time, sometimes just oblivious as to where we are in the world at that particular moment. It’s different every time, that’s the constant. Non-verbal communication is a real buzz in a duo, you wait for each other, you go with each other, you pick the moment or you follow it. It’s great.


Q. How do you describe Fraudband sounds?
It’s been described as “a raga Sonic Youth”, others have called it ‘fucking music’, ha! The ‘raga-rock’ tag makes sense to us. It’s got space and intensity and we fuck with the rhythms a lot, that’s heaps of fun, keeps you on the edge of your seat.

Q: Tell us about the process of recording the songs?
Recording has been quite straight forward for us, writing has been far more interesting. Recording for us has basically meant playing live in the studio. Writing is generally a longer process, in fact the songs are still been re-written with every performance

Q: Which band would you love to made a cover version of?
Someone recently suggested putting vocals to some of our songs, that sounds like a real interesting way to do a cover of us

Q: What are your plans for the future?
We have a short Australian tour coming up with a new video-single, then we’re off to Japan for a run of shows and a vinyl release later in the year.
*
*
*
Thanks