Daylight Versions with The Leaf Library - An Interview 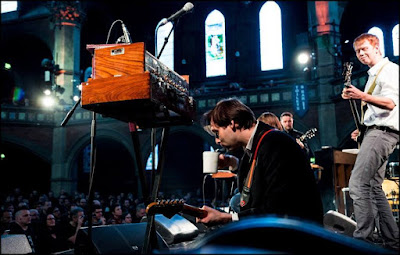 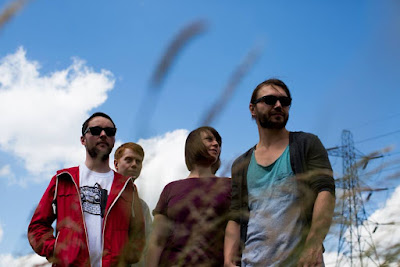 Q. When did The Leaf Library start? Tell us about the history...
Matt Ashton - The Leaf Library started slowly! After my old band Saloon broke up in 2003 Kate and I starting working together as Maps (before an enforced name change). We gathered Gareth (Jones, bass) and Ben Smith (occasional guitar) in 2005/6, after which followed a number of good/ok drummers. We settled on Lewis in 2009, mainly because he’s the best and has loads of cool synths. We had been recording on and off throughout those years and the best of that is collected on ‘Different Activities, Similar Diversions’ (2011). Ben wandered off to Bristol a while back and hasn’t played live with us for a while. Producer Simon (Nelson, from Cosines) has been playing a lot with us recently, as has The Amazing Michael Wood.

Q: Who are your influences?
MA – Over the years there have been loads but the following have all been pretty constant: The Notwist, American Analog Set, Lali Puna, Talk Talk, Stereolab, Yo La Tengo, Movietone, Broadcast, PJ Harvey, Radiohead, Brian Eno, Nick Cave and the Bad Seeds, My Bloody Valentine, To Rococo Rot, Hood and on and on…

Q. Make a list of 5 albums of all time…
MA - We’re allowed five each, right? Mine are (today):
Fennesz – Venice
Yo La Tengo – I Can Hear the Heart Beating As One
PJ Harvey – Let England Shake
Talk Talk – Laughing Stock
The Notwist – Neon Golden

MA – I love playing live though it is such a weird thing to do, when you think about it. I had a conversation with a friend the other day and we both realised that it’s not about us, onstage. It doesn’t matter if we have a good gig or a bad gig, whether the sound is shit or not – it’s about the people watching and what they take away from it. You have to let go of things a little. And be comfortable about a room full of strangers looking at you (which is the weird bit).

I have enjoyed playing live with this iteration of the band more than anything before – we sound great! And we launched Daylight Versions with a 10 piece band (including a horn section) which was pretty special. There may be a short film of that show released one day…


Q: Tell us about the process of recording the songs?
GJ - Perfecting sound forever, also

MA - Recording is possibly my favourite aspect of this band (soundchecking the least, followed by mixing, then band photos), as that’s the time when we get to try all sorts of mad shit out. The album, Daylight Versions, took a year and a bit to make, and that was us rushing it. It was an absolute joy – we did the majority of it at a place in north London called Studio Klank with Simon co-producing. We managed to be very experimental and free with the parts we recorded, whilst at the same time getting lots done.

We had a lot of guests that came in to play and sing on the record and it was a simultaneously fun, disciplined, silly and bonkers process. We tried to give the guests (and ourselves) as little direction as possible to see where things went. We drank a lot and ate a lot of biscuits. There were a few late nights but no chairs were thrown through control room windows.

Q: Which band would you love to made a cover version of?
GJ - I'd like us to cover Dopesmoker

MA – My personal list includes Wire, New Order, Brian Eno and Scott Walker. We’ve done some pretty random covers in the past though, including Talking Heads and a Bowie song from the Labyrinth soundtrack. I played Everyday Is Like Sunday by Morrisey on my own at Indietracks in the middle of our set last year. Got into trouble for that one.

Q: What are your plans for the future?
GJ - My other band wintergreen is about to release an album. I'm considering a holiday in Ethiopia- it has excellent food, coffee and jazz.

MA – We have a (sort of) new album almost ready to go – it’s all the drones from the songs on Daylight Versions stripped out and presented on their own. It’s a lovely drifting album and is going to be called Nightlight Versions. It will hopefully be out on cassette and download in April sometime.

Gareth’s other band Wintergreen have an excellent album – The Rule of Small Things – out this year at some point. And we’re planning some collaborative things with Daniel and David from The Drink (amongst others).

I’d also like to start working on the next record – there’s a title and a plan already!

MA – Do as much as you can! Make things! Read books! Do you own thing! Don’t ever care what other people think! (I have to try and tell myself all of these things on a daily basis. Sometimes it works.)
*
*
*
Thanks