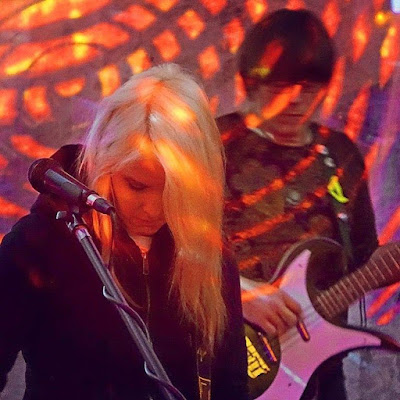 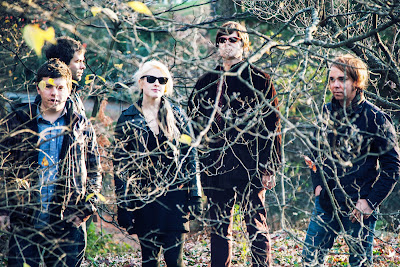 Hello guys, first congratulations on the new ep, it's really brilliant, what is your analysis after conclusion of Interstellar Car Crash? Are you happy with the result?
This was the first release where a lot of time passed between writing/recording and releasing it. The main reason for the long wait, was due to vinyl pressing turn around times. Nowadays it takes anywhere from 3 to 5 months to get back a finished product from a vinyl pressing plant. Having said that, we're all still really blown away by the tracks on this EP.

How was the process of creating the new ep?
Like our other releases, we did everything for this one. We rented a bunch of outboard gear and high end mics from a rental place in New York City, then just holed up in our rehearsal room for a few weeks and tracked our brains out. Once we had everything recorded, I took it all home and spent about 45 days mixing and mastering it myself. We all had a hand in the creation of these songs, which is an absolute first. Previous recordings were mostly me playing all the instruments... and actually, the track we selected for a single off Interstellar Car Crash was 100% written by a previous member of Magic Shoppe (Roger Poulin - now of Washington D.C.'s "Burnt Seeds").


What are the main differences between Interstellar Car Crash and last Triangulum Australe?
As with all the previous Magic Shoppe releases, I wrote/played/recorded everything on Triangulum Australe. Interstellar Car Crash is different, in that two of the 4 songs (Interstellar Car Crash and Salventius) were conceived entirely as a band. We all steered the ship so-to-speak on those two songs. Redhead was a tune I wrote years ago, but never got a recording of it I was happy with, until this version, and City Alight (Yeah) was written *entirely* by ex-Magic Shoppe guitarist, Roger Poulin. Roger left us on great terms and gave us his blessing to continue playing it.

What were the influences for creating the new ep?
I got my hands on a 1967 Vox Cheetah, which has some incredible onboard effects - like fuzz, repeater, treble boost... and I sort of went to town with it. It's easy to feel all invigorated when you get an amazing piece of gear in your setup. Aside from that, a lot of us were listening to *severely* repetitive, fuzzy tracks like "Looking At You" - MC5 and "Penetration" - Stooges, but also a bunch of modern stuff like New Candys, Black Market Karma, Cult Of Dom Keller, The Oscillation, Haunted Leather, etc...

What are your plans for 2016?
We're releasing Interstellar Car Crash digitally and on 10-inch white vinyl on Friday February 5th, 2016. Our friends at Optical Sounds in Toronto are handling the distribution all over Canada via Outside Music. Leading up to that, we've got a bunch of press with some online music reviewers and blogs, as well as some live radio appearances and interviews. We're also playing a bunch of shows throughout the Northeast. Also, we've got another EP almost completely recorded. We're hoping to have that released by late summer 2016.
*
*
*
Thanks