Winter Evergreen with Some Gorgeous Accident - An Interview 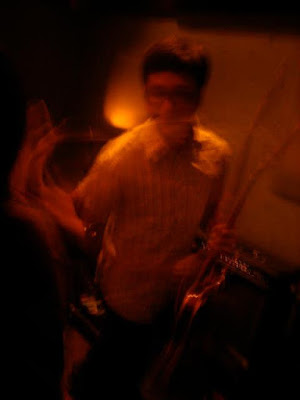 
Q. When did Some Gorgeous Accident start? Tell us about the history...
It was probably around 2006-2007. I was working with my brother on an Apple Orchard album and I had a few songs which I felt was not suitable for the record. So I found time to finish recording them on my own, which became most of what's in Winter In Watercolors, a cassette-only release issued by Best Kept Secret. Initially, yes it was just myself doing everything including singing but I felt uneasy and was not satisfied by it. In the follow-up release, Imaginary Lines, I thought having some of my musician friends sing was a good idea. Luckily, I have some really talented mates and it worked itself out.

Q: Who are your influences?
There's just so many. Blueboy is an obvious one certainly. I've been heavily influenced by the usual shoegaze suspects like My Bloody Valentine and Slowdive. Pale Saints and Spoonfed Hybrid were big inspirations too, along with bands like Riverside, The Railway Children, Insides and Swallow. Cocteau Twins of course played a huge part in my life as a musician and as a person as well.

Q. Make a list of 5 albums of all time…
It's tough to do only five and it usually changes depending on my mood but I'll try:

Okay, that's ten and I feel there's still a bunch more that needs to be included on here.

Q. How do you feel playing live?
I have not played live in years! I like playing live though - I have done so in the past. However, Some Gorgeous Accident wasn't developed to become a live band. Given the right time, the right personnel, who knows? I might gather some friends around, rehearse a few times and maybe play an intimate gig or two somewhere far away.

Q. How do you describe Some Gorgeous Accident sounds?
It's dreamy and wintry, it has a shoegazey feel so whenever I genre tag my music on iTunes, I put dreamgaze or wintergaze. I have a thing for labeling stuff and it's really just to amuse myself so don't take it seriously.


Q: Tell us about the process of recording the songs?
It really starts with an idea. Like a sound in my head and I go from there. Everything is done in my home studio, Hush Hush. I could start with programming a beat or with just weird guitar noises and then structure it with "dummy tracks" which are deleted in the final mix. I like structure in the songs, it helps make my life easier. But I love chaos too so I try to find a balance between the two. The tricky part is the vocals which always come in last and usually, I already have someone in mind by the time I am finished writing the song. I have collaborated with friends from bands like Silver Screen, Outerhope, Jenny Arson, Archaster, Candy Apple Pops, The Wentletraps, Slow Hello and Arigato, Hato!. All have contributed their vocal parts (and on occasion, some guitar work as well) by sending digital files online. Apart from my wife, who has sung in a couple of songs, I have never been in an actual studio with anyone involved in the vocal recording. I think that's pretty cool.

Q. Which new bands do you recommend?
I'm really not as updated as I was in previous years. I've enjoyed the past singles by Night Flowers so I'm eagerly awaiting their debut LP. Girl Ray, Friedrich Sunlight and Lake Ruth are a few of the new-ish bands I really love. Maybe I should mention Death And Vanilla as well, although their last album came out two years ago. But I love them to bits.

Q: Which band would you love to made a cover version of?
Actually I would love to re-do a cover version I did many years ago. It was a cover of "Brighter" by The Railway Children. It's lost in internet obscurity probably so I don't think many people have heard it. But then, I'm not too sure if I can find time to re-record it.

Q: What are your plans for the future?
I'm currently working on a compilation album of sorts that features a few old songs, a bunch of new tracks, reworkings of older ones, among a few others. I feel like this has taken a lot out of me and I'm uncertain if I will continue making music as Some Gorgeous Accident. I'm not saying I won't be making music anymore. I might change my mind, sure but most likely if I make more music, it won't be for the next few years. Or perhaps, it will be in some different form or another.

Q: Any parting words?
Thank you for the support and taking time to interview me, Renato! It's been a pleasure. Please do anticipate an album coming out real soon!
*
*
*
Thanks