How I Spend My Days with Toledo Springs - An Interview 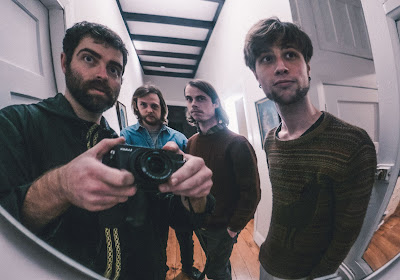 
Q. When did Toledo Springs start? Tell us about the history…
Nico knew each of us separately and invited us to jam together about 3 years ago. It turned out we were all keen to push things a bit further as a group, so after a few sessions we started writing some songs. We didn’t all know each other that well at first (apart from Nico & Isaac who are brothers). So we kind of had to become mates and musically connect all within a small period of time. But it all worked out well and we’re all great friends now. I think that really helps in the writing process and any team environment, because we can all be honest and brash with each other but not take the criticism personally.

Q: Who are your influences?
We all have various tastes in music which is awesome, because we can each bring different ideas to the table. For this album, Nico was heavily influenced by Cocteau Twins and some production ideas that Piero Umiliani uses. I think we all love anything Kevin Parker gets his hands on too. The idea of ‘disconnecting' from society or relationships etc.. really shone through as well, and I reckon that influenced the songs lyrically.

Q. How do you feel playing live?
Thats what being in a band is all about, playing live is the best part. We all love it!

Q. How do you describe Toledo Springs sounds?
Easy listening holiday dream pop, with a slice of good cheese.

Q: Tell us about the process of recording the songs ?
We decided as a band that we wanted to do everything ourselves. That was mainly due to a lack of money haha. So most weekends it meant one of us would be recording one section at a time in various locations. We relied mainly on parents being away and having the use of empty houses and rooms. It was a very ‘Do It Yourself' approach but we all learned a hell of a lot doing it this way. Nico quit his Job and spent the last 3 months mixing the tracks and calling Josh, Isaac and I over to redo parts etc..

Q. Which new bands do you recommend?
Kane Strang is absolutely killing it at the moment, highly recommend. Would recommend listening to DUAL as well, they’ve got a wicked New Order / Jagwar Ma vibe going on.

Q: Which band would you love to made a cover version of?
We’ve discussed doing covers a few times, maybe something with a bit of groove like Earth, Wind & Fire. We do a pretty good version of the Spongebob Squarepants Theme tune.

Q: What are your plans for the future?
Nico is heading to Berlin for a year, so he won’t be in Auckland to play live shows. So I think we will all work on individual projects in the meantime. We haven’t called it quits on Toledo Springs, we will just use the time off to write new music and get inspired for whatever is next to come.

Q: Any parting words?
We’re keen to play some shows in Sao Paulo next year! Let us know when we should fly over haha. And you should visit New Zealand sometime!
*
*
*
Thanks