We're Losing The Light with Submotile - An Interview 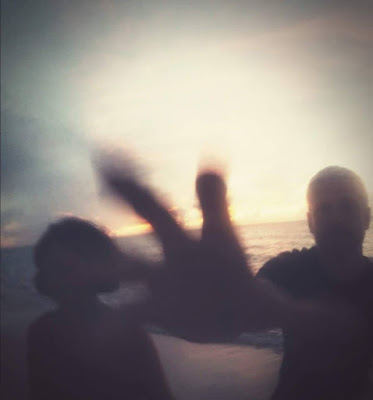 
Q. When did Submotile begin? Tell us about the history...
We're a husband a wife from Dublin Ireland and Bari Italy.

We started by accident in March 2018. I had more or less stopped playing music over the last few years, but over the winter of 2017/18 I was gradually rediscovering the joys of recording again - and I was especially getting into recording 'in the box', something I had never really done before. One day, I was playing a few chords on an acoustic guitar, Daniela sang a counter-melody...I thought what she came up with was great, so we recorded it and went from there. That was the song "Signs of My Melody". We wrote five songs together after that and put our first EP out in August.

Q: Who are your influences?
Sonic Youth were the first band that really got me interested in playing the guitar. I'm massively influenced by them, My Bloody Valentine, Swans, Mogwai and lots of ambient stuff too, like Biosphere.

Q. Make a list of 5 albuns of all time…
Daniela
1) Explosions In the Sky - The Earth is not a Cold Dead Place
2) Interpol - Turn on the Bright Lights
3) The National - Boxer
4) Warpaint - Warpaint
5) Swans - Love of Life

Q. How do you feel playing live?
We haven't played live yet, but I always loved it when I was in previous bands. We can't wait to make our live debut.

There's always a feeling of terror that something will just go wrong - when you play with a load of effects and technology, the more you introduce, the greater the likelihood of things malfunctioning, but when things go well, there's no greater feeling.

Q. How do you describe Submotile´s sounds?
We're going for a massive, layered sound, with plenty of melody mixed with noise.

Q: Tell us about the process of recording the songs ?
The first EP was mostly done at home - well, everything except the drums, which were done in a studio in Dublin. We were on a steep learning curve with the mixing as we recorded so many layers, it ended up sounding a bit messy, but we're learning as we go and the newer material is sounding better.

Q. Which new bands do you recommend?
Galants, Just Mustard, Palm Haze and pretty much anything on Midsummer Madness records.

Q: Which band would you love to made a cover version of?
Something not too obvious....I'd like to make a really noisey shoegaze version of Tears for Fears "Everybody wants to rule the world" for example. Or "The Cross" by Prince.

Q: What are your plans for the future?
We're deep into recording our debut album. The plan is to put that out in February/March, with a number of videos too and then to play live.

Q: Any parting words?
Smell the flowers while you can.
*
*
*
Thanks