Endless Dreams in Dying Motions with Chloral - An Interview 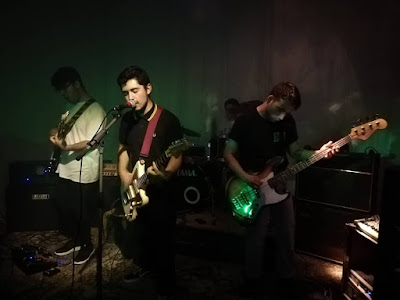 
Q. When did Chloral begin? Tell us about the history...
R: Chloral begun as an impulsive idea to make a blackgaze band with our bassist and drummer back in October 2016, where we met at a show and went out that night, but we only started taking it seriously around January of this year after being in a couple hardcore punk bands and recruiting our guitar player. We switched the idea from blackgaze to shoegaze and immediately started writing our first demo and playing as many shows as we could book.

Q: Who are your influences?
R: If we were to boil it down to a couple band I'd say My Bloody Valentine, Smashing Pumpkins, Nothing and Ride but I guess we listen to a lot of different genres so it would be hard to pinpoint a couple. We all like loud music so i guess that would be the our main "influence".

Q. How do you feel playing live?
R: Spaced out and like it's not loud enough

Q. How do you describe Chloral´s sounds?
R: Nostalgic, kinda like when you feel like dressing up but don't really wanna go out

Q: Tell us about the process of recording the songs ?
R: Recording was a pain in the ass because it was basically self produced and none of us knew anything about recording, luckily a friend of a friend helped us with the recording process and did some mixing but ultimately we had a good time.

Q. Which new bands do you recommend?
R: Shameless self plug but two of us play in a hardcore band called BLAME and we released an EP at the beginning of the year (blamehc.bandamp.com) so check that out if you're into that kinda stuff. Yeahrs from Berlin are killing it and are great dudes, just like Bum Motion Club, a dream pop/shoegaze kinda gig from our town.

Q: Which band would you love to made a cover version of?
R: Three of us would love to cover Be Quiet and Drive by Deftones but our guitar player has terrible taste and doesn't like them. We still love him tho.

Q: What are your plans for the future?
R: Keep playing as many shows as we can while writing more songs to record an EP with better production and sell out if the opportunity arises.

Q: Any parting words?
R: The blog is really nice so thanks for the interview and shoutout to anyone who reads it. XOXO
*
*
*
Thanks