In Event of Moon Disaster with Blue Velvet - An Interview 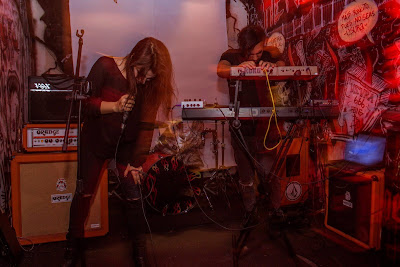 
Q. When did Blue Velvet begin? Tell us about the history...
Antonio and I (Noelia Cabrera) are both publicists and we met a long time ago in that area. One day we happened to be in a concert (to be more specific in the Radiation concert where Follakzoid played) in which I played the keyboard with one of my alternate projects, we were to meet one day to make a jammin of keyboards and voices like huevea and then in an afternoon we managed to specify what would be Dark Room in a precarious version, but at a level that allowed us to realize that there was a chemistry at a musical level to continue composing and get to consolidate it as a project.Our first name idea was Like a Velvet Glove Cast In Iron, like the graphic novel by Daniel Clowes. We liked the image very much because it spoke of something that could be delicate and feminine like a silk glove, but also brutal and violent when being forged in iron. Obviously it was very long, but we were left with the word velvet, which was indirectly influenced by The Velvet Underground and Nico's work . Then we realized that Blue Velvet, precisely because of the movie, had the same load and also transmitted the duality that we were looking for at the beginning.

Q. How do you feel playing live?
It is a lot of fun. We like to keep our shows spontaneous, so we take the rhythm lines and some arrangements recorded, but play most of the stuff live. Sure, it doesn’t always sound exactly like the record, but that gives us the chance to interact with the audience and go with the flow. Feuer is an awesome example of that, that song never sounds the same twice but always leaves an impact on stage!

Q. How do you describe Blue Velvet´s sounds?
We sound like an electric mermaid choir singing from a distant planet.

Q: Tell us about the process of recording the songs?
It was a big learning process and we had to find our own way of working. The ideas for songwritting came to us really quick, but then at first, we had no idea of how to take those raw recordings and make them sound, you know... not like demos but like actual songs. Some of them changed a lot in structure, some other didn’t change at all. Then we started working with Mario and that really improved our sound. The mixes started to feel alive. We embraced heavy delays and long FX chains, mostly typical of shoegaze style production techniques. We ended up with this dark but delicate sound, which made the album sound unique to us so we knew we just had to keep on going in that direction.

Q. Which new bands do you recommend?
VideoDrome
Perra Vida

Q: Which band would you love to make a cover version of?
We have always talked about covering Nico, , in fact it is pending for us to make a cover of My Heart is empty a song that we like especially, but we haven’t started with that project yet. We did record a cover of Silvania’s Solineide for an upcoming tribute album. It was an awesome process, since we wanted to keep and enhance the ethereal atmospheres of the original song but also contribute with our style. The tribute record is gonna be released next month so you can hear what we are talking about soon.

Q: What are your plans for the future?
Keep on recording, we’re equipped with a whole new ton of gear, some of it analog, which would sound awesome for us but we haven’t tried it in recordings yet. Pretty much keep on experimenting with sound and trying to make everything we release the best thing we’ve released so far. For sure we want to make visual work for our music too.

Q: Any parting words?
We are gonna release a video of our song Like a Velvet Glove ( included in our first album) pretty soon, stay in tune and thank you so much for the awesome interview!