Playing With Ghosts with QWEEN M8 - An Interview 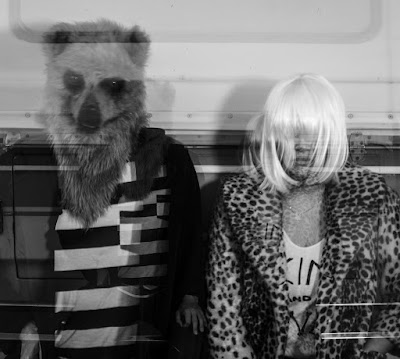 
Q. When did Qween M8 begin? Tell us about the history...
Billy: Qween M8 was born out of a very serious conversation about Ween between roommates over a meal of mushrooms. Bananas and Blow was listened to 54 times in a row and made more sense with each subsequent listen. Only band better than Ween is Queen, mate.

Billie: Sune Rose Wagner. He's my hero, I want to be him when I grow up.

Billy: We don’t. It seems an awful lot like work.

Q. How do you describe Qween M8´s sounds?
Billie: If Trent Reznor and Ween had a baby, and meanwhile, The Raveonettes and Lana Del Rey had a baby... and then by some miracle those two babies met and took a whole lot of shrooms together... that's kind of what I hope QWEEN M8 sounds like.

Q: Tell us about the process of recording the songs ?
Billy: Lay the beat down, lay the bass down, write some words, change some words, guitar city, add a harmony, smash it through the buss and call it a day.

Billie: We record everything as we write it. We usually talk first about what kind of song we are feeling. Decide the mood, whether it's gonna be upbeat or mellow and kind of go from there. Billy might put down a beat and then we just layer the guitars or synth parts and once we have a foundation we'll play around with melody. We do not over-write anything. It's very much an organic writing process of committing to melody choices that first come up.

Q. Which new bands do you recommend?
Billie: I'm always late to the party when it comes to discovering music! Nine Inch Nails is a NEW band to me because I've only really started listening to them in the last year but they've been around for years! I'm low-key obsessed.

Q: Which band would you love to made a cover version of?
Billie: We've talked a lot about maybe covering Blur or probably Nine Inch Nails but, it might have to be 'Bananas and Blow' by Ween.

Billy: I think we could do a sick “Wicked Game” but it’s a bit obvious.

Q: What are your plans for the future?
Billy: Get the third EP out by Christmas.

Billie: We have currently released two EP's that are part of our three EP series called "The Royal Trilogy". The Final EP will be out soon and then we hope to work towards our first full-length album release in the new year.

Q: Any parting words?
Billie: Thank you for listening to our music and reading our babble.

Billy: Just do it bruv. It doesn’t have to be perfect as long as the intent is there. Waiting is the same as doing nothing
*
*
*
Thanks