Shadows with Twin Tribes - An Interview 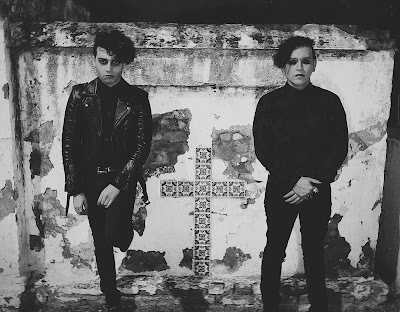 
Q. When did Twin Tribes begin? Tell us about the history...
Twin Tribes started in the summer of 2017. I’ve always liked dark 80’s music when I was young and always wanted to start a project in that genre. Around early 2017 I started recording some demos but knew it would be difficult to make this happen as a one piece, so I started looking for someone who could join me. I thought about Joel because we knew each other from a previous band and he loved the demos. After that, we ended up writing/recording “Shadows” in the following months and we’re really glad about the final result and the popularity it has gained since January 2018 when it was released.

Q: Who are your influences?
We both have our own influences, but they vary from bands from the period of the dark 80’s like The Cure, Depeche Mode, Clan of Xymox to more contemporary bands like She Past Away, Lebanon Hanover and Drab Majesty to just name a few.

Q. Make a list of 5 albums of all time…
It’s always very difficult for me to choose a favorite anything since I feel it all depends on my mood. But albums that are very dear to me are:
Soda Stereo – Nada Personal,
Depeche Mode – Music for the Masses,
The Cure – Seventeen Seconds,
The Smiths – Self Titled
and Drab Majesty – The Demonstration.

Q. How do you feel playing live?
I love playing live. We always try to put up a show aesthetically and musically pleasing for the fans. Dancing, lights, fog and loud guitars and basses drenched in chorus is the only way I can think of to describe it.

Q. How do you describe Twin Tribes´ sounds?
The sounds we used not only for our album but for playing live come from the analog instruments of the 80’s. We use iconic drum machines like the Roland TR-707 and Linn LM-2, a Roland JX-3P, a Korg Poly 800 and vintage chorus pedals.

Q: Tell us about the process of recording the songs?
We recorded the album in Mission, Texas with our friend Allen Michael. We recorded the album all analog, which in my opinion is what gave the album the character we were looking for and after tracking, the album was mixed by Charlie Vela at Sound of Rain Studios.

Q. Which new bands do you recommend?
There are too many great bands being born in this post-punk revival era that seems to be happening. I would recommend Second Still, Stockhaussen, Frio y Vacio, Diavol Strain, Nox Novacula, Otzi and Deathstair if you haven’t heard them yet.

Q: Which band would you love to make a cover version of?
Every time I get a little free time I record a small clip of a cover. The last one I did was Save a Prayer by Duran Duran, but the cover I would love to finish is The Metro by Berlin.

Q: What are your plans for the future?
At the moment we’re going to release a new cassette tilted Part Time Punks Session. It includes 4 live songs recorded at Comp-ny studio while we were on tour in Los Angeles, California as well as our debut album, Shadows. We’re also going to be touring the Midwest during late December, East Coast in the summer of 2019 and several festivals. We also plan to release our second album around the summer of 2019 as well.

Q: Any parting words?
Thank you so much for giving us the opportunity to reach out to your readers!
*
*
*
Thanks