215 with Sugar Violets - An Interview 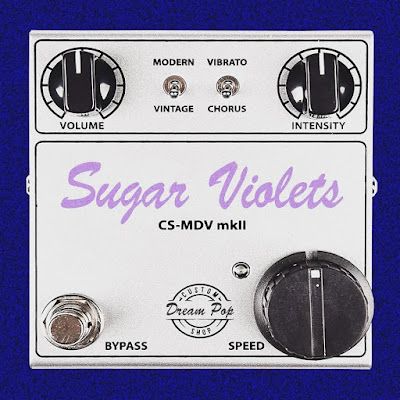 Q. When did Sugar Violets begin? Tell us about the history...
David- Sugar Violets are myself (David Loucks) and Lashaan Everett. It started with a conversation about a month ago. Lashaan's band had broken up and she wanted to finish the songs that she had been working on, so I offered to help. I sent her a demo of a song I was working on and that's what became the song 215.

Q: Who are your influences?
David- That could be a very long list. I think we are both all over the map in what we listen to. I would say for me the formative ones would be SST and Creation records, the stuff I grew up listening to.

Lashaan- I agree, the list would be super long. Ha. My music taste is all over the map (punk/hardcore, psych, shoegaze, jazz, soul, hip-hop, rocksteady, metal, brit pop...) and I certainly draw a lot of influence from that.

Q. Make a list of 5 albums of all time…
David-
1 Swervedriver: Raise
2. Dinosaur Jr: You're living all over me
3. Sonic Youth: Goo
4. My Bloody Valentine: Isn't anything
5. The Damned: Damned Damned Damned

Lashaan- Oh, that's a hard question. But in no particular order:
1. The Smiths- Meat Is Murder
2. My Bloody Valentine- Loveless
3. Verve- A Storm In Heaven
4. Bad Brains- Rock For Light
5. Nas- Illmatic

Q. How do you feel playing live?
David- We are currently only two people and I play the bulk of the instruments on the records myself. It would be a challenge but it's definitely something we'd like to do.

Q. How do you describe Sugar Violets´ sounds?
David- I don't know that I would. I think it would be much more interesting to hear someone else describe them.

Lashaan- Agreed. I am fortunate that when are bouncing ideas off one another they just always seem very plausible, but they are certainly all over the map. But I'm not sure I could exactly categorize our sound.

Q: Tell us about the process of recording the songs ?
David- We live about 1500 miles apart so we record separately. One of us comes up with an idea and records it, Lashaan decides how long each part of the song needs to be to fit the vocals in. I do the arrangement and play whatever instruments we need, it's done digitally of course but I mainly treat it like it's tape. I like the spontaneity of people playing actual instruments. Once I finish recording the instruments I send the track to Lashaan, she does her vocal tracks and then I mix it.

Lashaan- As David stated it is a process...he plays most of the instruments (I play guitar as well, but have only written 2 songs thus far) and he is able to arrange everything really quickly. It's really labor intensive but so amazing to be able to watch it come together.

David- It's a process we are working on. Future songs will include Lashaan playing more instruments and I will probably do some vocals as well.

Q. Which new bands do you recommend?
David- The New Stargazer Lillies tracks are the most amazing thing I've heard in quite a while.

Lashaan- I have been loving 93millionmilesfromthesun's New Fuzz EP. I have also been listening to Saba- Care For Me, Uncle Acid And The Deadbeats- Wasteland, Windhand- Eternal Return and the new Swervedriver tracks of course.

Q: Which band would you love to made a cover version of?
Lashaan- I have a few in mind but one that I most recently thought I would like to cover is Selena- Como La Flor. That probably sounds odd, but I know we will be able to do something really cool with it.

Q: What are your plans for the future?
David- We are currently working on an EP we hope to have out by the end of January 2019

Q: Any parting words?
David- I would just like to thank everyone, the response to our music so far has been amazing.

Lashaan- I am deeply humbled by the response we have received. So, thank you to all that have been so supportive!
*
*
*
Thanks