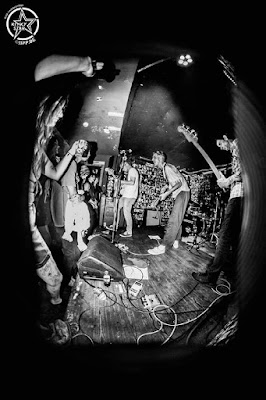 
Q. When did the band begin? Tell us the history.
Early 2015, our drummer and bass player finished up with a previous band. They wanted to continue to play together but in a freer, democratic and fun group. Our vocalist Yannick had tried out with that old band the day it broke up. We loved the wild man and got him on board. Zeger, our guitarist, had recently left his psychobilly band Adios Pantalones. We dragged him down to our moldy basement and came up with a new song each rehearsal.

The band has since upscaled to a moldy lock-up garage. We've played around 50 to 60 shows together. Besides a demo and 7" we've recorded 2 EPs with Belly Button Records, a lo-fi punk/garage label in Antwerp that has a few of our local scene's releases on it.

Q. Who are your influences?
Hmm... very varied. We haven't really set out to work in the confines of a genre or style, we are too chaotic to be that organised. I guess our paths collectively cross with garage, proto punk, freakbeat / brit invasion, 70's punk and a bit of 50's rock 'n roll.

Q. How do you feel playing live?
It's the best! If the mosh partly resembles a Soul Train line dance then we've done our job right! Having said that, we recently played our best show yet to a bunch of bikers staring at us from their bar stools. They made us play again, so it can't have been too bad, ha.

Q. How do you describe the Roda Lits sound?
Like some wasted guys thumping away on broken down old gear. Fat-bottomed garage rock.

Q. Tell us about the process of recording songs.
Our first recording on Belly Button was banging out a few of our songs to test a new 1/2 inch tape. It was played live with minimal mics. We released it in 2017 on cassette and it sold out.

For our new EP we raised the bar to lo-fi, staying overnight at the Belly Button house, 'Tooth Mountain', to record. It was again, recorded with minimal micing, live, direct and the least fuss possible.

Q. Which band would you like to do a cover version of?
A song on our new record, 'Burnt By The Sunshine', whilst not a cover per se, has fun with parts of some The Lemon Drops and Jon Travolta / Olivia Newton John lyrics mashed up with ours. We used to play the Troggs' B-side 66 54321 a little.

Q. What are your plans for the future?
In short, nope.

We're busy with the work surrounding the upcoming release. We've all worked in visual arts of one sort or another, so we are very DIY with band art etc. I know next chance we get, everyone is hanging to write more songs.

Q. Any parting words?
Take a listen to our new record on bellybuttonrecords.bandcamp.com and you can find us on Facebook @RodaLits. It won't wreck your day!
*
*
*
Thanks