The Appearances with Ester Drang - An Interview 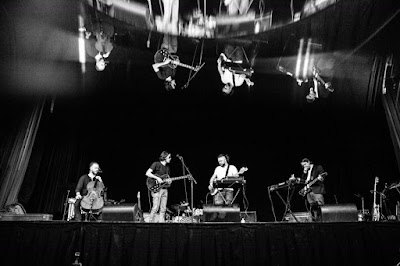 
Q. When did Ester Drang begin? Tell us about the history... Q: Who are your influences?
Ester Drang began in 1995 with the gathering of a few friends in high school. This was back in the grunge rock Nirvana days which played a big roll in the bands influences along with many others such as My Bloody Valentine . Radiohead , Spiritualized , Tortoise, Slowdive ,Starflyer 59 , Phillip Glass , Mogwai . Many sorts of influences this band and group of friends shared . There’s so many great bands from that time I could go on and on . From our past at the time I’d say Beatles for sure and many 70’s and 80’s bands . The Band of coarse and Echo and the Bunnymen, the Cure , The Flaming Lips , Wilco . I mean where does one Stop there’s so many great influences . Stravinsky, Vangelis Buddy Holly - I’ll Stop at that .

Q. Make a list of 5 albuns of all time…
The best 5 albums of all time That’s a hard one to answer . Don’t think I can answer that one . Maybe it’s safe not to try

Q. How do you feel playing live?
Playing live has always been a good time when trying out newer songs . A bit of battle between singing and wanting to do more on my instrument . I mean some of the guitar and piano parts I’m playing should be played by some one else just due to the sake of the parts being two crazy to be singing over . People often ask why I’m not dancing or moving around . I’m not really a fan of crazy stage antics but mostly just focused on guitar effects switches and strange parts that I’m playing and staying relatively close to the vocal mic. A bit of a haze of muscle memory at some point if that makes since . Kind of like the first time a person figures out the timing of a Phillip Glass tune and then sings over it . Although none of our tunes use that timing yet anyways .

Q. How do you describe Ester Drang´s sounds?
As far as the sounds of the band Ester drang or what I was hoping to capture in recording these ideas . Music has always been kind of a dream land for myself and so just trying to capture some kind of vibe and escape just being taken away for a while . Soundtracks for moments in you’re life I suppose. Maybe a journey of types

Q: Tell us about the process of recording the songs ?
The process of writing/recordings of these songs usually starts with myself either coming up with a riff on the guitar or a chord progression on the piano . Then onto creating the changing parts of the rest of the song . Recording that basic one instrument building block and just building from there . Bass , drums, keys . On and on . Usually present some demo version to the band and keep building from that point as a group or just keep the original idea depending on how it seems to be going . It’s nice to just let people and friends play there ideas out and just see what happens even if it wasn’t what I had in mind to start with.

Q. Which new bands do you recommend?
Beach House
Tame Impala
Broncho
Net - these guys are really brand new just about to finish there first record they’ve opened up for the flaming lips a few times and just bring back some good 60’s psychedelic underground vibes .

Q: Which band would you love to made a cover version of?
As far as doing a cover song the thought crossed my mind of doing all my colors by Echo and the Bunnymen.

We opened up for them about 20 times and I think each night that song was just so amazing to hear There still to this day one of the best bands out there by far .

Q: What are your plans for the future?
Just plan on a tour in the states this next summer in support of the appearances ep that we just released and about to release a split 7 inch with a great band called Lord Buffalo from Austin Texas.

Q: Any parting words?
In a Music world that has been marketed to death I’m just thankful to still be able to play when I can and enjoy the sounds and hope that maybe some one else gets something out of it or from it on some level . Just setting at the piano at the end of a long day and putting you’re foot on the sustain hitting one chord and letting that ring out for as long as you can
*
*
*
Thanks