Mind Is A Garden with Blind Moon - An Interview 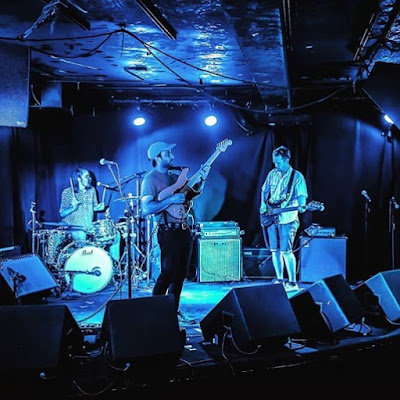 Q. When did Blind Moon begin? Tell us about the history...
Blind Moon technically started in 2012 when I released an EP called ‘Almost Nowhere’. At that time it was just myself, writing songs and recording them in my bedroom in the Logan Square neighborhood of Chicago. The band was started ultimately as a way for me to release my recorded music. It has since grown to become a medium to write and collaborate with the many talented friends and musicians I have here in Chicago.

Q: Who are your influences?
The influences for Blind Moon are ever changing. I have always been a major music collector and take influence from just about everything from Kevin Shields to Miles Davis. I would say that at the moment Gram Parson has been one of my biggest influences as a songwriter. Liz Harris, also known as Grouper, is another person who really inspires me as an artist. These are people who really transport me through their art, and that’s something I strive to achieve with Blind Moon.

Q. Make a list of 5 albums of all time…
I was going to say Zeppelin I-IV…

Q. How do you feel playing live?
I love playing live. It’s all I really want to do. The best part about Blind Moon is that we can really strip down the songs live and approach them differently depending on the venue… bill… just general vibe of the moment… there’s a lot of room for improvisation which is something I have always valued the most about seeing other bands perform. As of late we have been playing as a three piece: just drums, bass and guitar. Having a bit of a swinging door of friends and musicians also helps to keep it fun and different every time. If you want to hear a band play songs precisely the way they are played on the recording, might as well just listen to them at home.

Q. How do you describe Blind Moon´s sounds?
ROCK

Q: Tell us about the process of recording the songs ?
I still record mostly out of my bedroom with the exception of drums, which simply don’t fit in there. I spend most of my time layering guitar and vocal parts after which I’ll find a larger space to record Drums and maybe add in some percussion and keyboards. Finally I like to return to the bedroom and record bass parts last.

For my most recent record ‘Mind Is a Garden’ this was mostly the process. Although instead of performing everything myself I had my friend Colin Croom (Twin Peaks, Sister Crystals) play drums, percussion and keys. It was a really inspiring process and I enjoyed having other musicians involved. Colin took the songs to places I hadn’t originally intended or envisioned them going. He has a real way of doing that!

Q. Which new bands do you recommend?
I got to represent Chicago. There are so many awesome musicians here and I have seen so many great shows recently! Some favorites lately have been Dehd, The Knees and Divino Nino to name a few. I also play guitar in a band called Sun Cop with my friend Andrew. We have collaborated before and he has also mixed all the Blind Moon recordings. He’s working on a new album right now, which is going to be pretty incredible!

Q: Which band would you love to make a cover version of?
Tears for Fears

Q: What are your plans for the future?
The idea is to continue to create and make music. Really whatever it takes to make that possible.

Q: Any parting words?
Thank you for the interview and thanks for listening! Hope to make it down to Sao Paulo soon! ROCK ON
*
*
*
Thanks