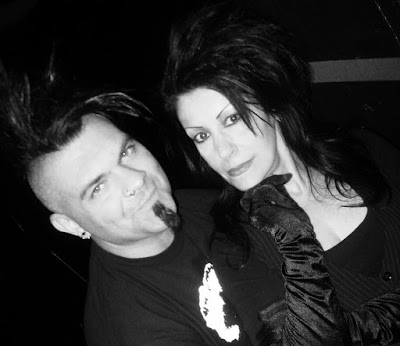 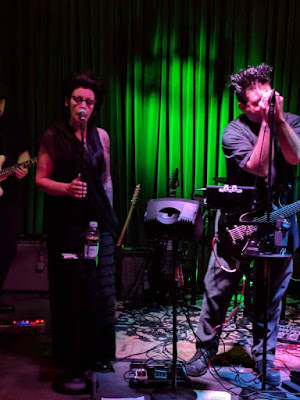 Q. When did Ghost Painted Sky begin? Tell us about the history...
A. Officially, Ghost Painted Sky began with the release of the first, self-titled EP in 2014, though I (David) started writing and recording the material that would be released under the Ghost Painted Sky name after several years of musical inactivity, the end of a long-term relationship, and some other major life changes in early 2013. The project has deeper roots than that, though, as I had originally started working on solo material in the late 90s/early 2000s that was a little more darkwave in nature, but in which you can hear the beginnings of the Ghost Painted Sky sound (a few songs from this period were just recently released as the Barren Ground EP). I was also in an 8-piece band in the mid-2000s that also had an influence on how Ghost Painted Sky came to form… That former band, with so many members, had a lot of interpersonal and scheduling issues, so with GhostPainted Sky, I’ve tried to keep the core as just myself (at first), and since 2017, myself and Lisa (Wood), and have tried to keep the live band as changeable and adaptable as possible. That gives the core control over the creative direction of the band, but allows us more flexibility in live performance, while also allowing for working with other people on whatever basis best serves the overall sound, without getting too bogged down in personal issues or creative differences.

Q: Who are your influences?
Lisa and I are both primarily influenced by the experiences of our lives, but musically speaking, a lot of the classic 80s and 90s goth rock, post-punk, and darkwave has kind of been our reference point, whether we mean for it to be or not, including: Clan of Xymox, early Lycia, The Sisters of Mercy, Swans, The Cure, Cocteau Twins, Joy Division, Chameleons, Siouxsie and the Banshees, etc. as well as some latter-day goth rock, and some of the Projekt and Hyperium stuff from the 90s and early 2000s...like Requiem in White/Mors Syphilitica, Faith & The Muse, Human Drama, and Love Is Colder Than Death. We have other musical influences too, that maybe aren’t as prominent but are no less valid, including deathrock and shoegaze (I'm a big Slowdive fan), as well as even post-rock, synthpop, industrial, and electronica.

Q. Make a list of 5 albums of all time…
A. My top five have been pretty longstanding, in no particular order:
The Cure - Disintegration,
Lycia - A Day In The Stark Corner,
This Mortal Coil - It’ll End In Tears,
Swans - White Light From the Mouth Of Infinity,
The Sisters of Mercy - Floodland…

Q. How do you feel playing live?
A. Every live show is a new experience, and isn’t always easy to categorize in a general way, as Lisa puts it: so many feelings and thoughts course through you… With that said, at best it’s an exchange between performer and witness that elevates both. It’s a dialogue, and sometimes, for a variety of reasons, you can transcend the normal boundaries and make for an experience memorable to all. That’s about as good as it gets. Most often though, it’s worthwhile enough just to be somewhere new and different and bearing your inner being to a receptive group of people through your songs…it can be a transcendent experience, with an immediacy that can otherwise be difficult to achieve on a normal day-to-day level.


Q. How do you describe Ghost Painted Sky´s sounds?
A. Ghost Painted Sky is the sound of Lisa and I bearing our hearts and souls…confessing our secrets and going to our darker places to explore and voice our hopes, fears, and regrets, in a kind of process of catharsis. Musically speaking, we use whatever means we find necessary and at our disposal, though we have thus far not strayed too far from our goth rock/post-punk roots. That said, we have been playing with some new ideas and sounds that incorporate more darkwave, deathrock, tribal/world, and even shoegaze/post-rock and synth pop sounds. We don’t want to limit ourselves too much by genre convention, but I think our overall vision keeps our sound pure and distinctively Ghost Painted Sky, while giving us room to explore the best ways to convey what we are feeling and experiencing. We’re pretty much always dark, intense, and introspective/contemplative, whatever the exact means we may use to convey it.

Q: Tell us about the process of recording the songs ?
A. Every song is different, but it will often start with a simple idea or musical phrase, be it a bassline, a guitar part, or a keyboard sound. I’ll build-on and experiment with what works on top of that, what other changes and parts might work best to convey the feeling of the song, and either I or Lisa will add lyrics and vocals to it somewhat late in the process, which occasionally warrants further restructuring and refinement. Other times it happens the opposite way, where Lisa or I will have lyrics and/or a vocal melody that we start building off of, and/or writing the music around. Every song is its own unique journey.

Q. Which new bands do you recommend?
A. There has been so much good new music out the past several years…a lot of the classic post-punk sounds seem to be in the ongoing process of being rediscovered and reinterpreted through a modern lens. It’s been really exciting to discover a lot of new bands recently, and a few we’ve been listening to a lot include: She Past Away, Drab Majesty, Holygram, Soft Kill, Soviet Soviet, Saigon Blue Rain, Boy Harsher, Void Vision, and Angels of Liberty…

Q: Which band would you love to made a cover version of?
A. We’ve already done a cover of New Order’s somewhat forgotten classic “Doubts Even Here” on our first full-length, Flightless (released in the summer of 2018), and have toyed with the idea of doing a number of other covers, including maybe a Joy Division or Sisters of Mercy track, possibly a Siouxsie, Lycia, Cure, or Xymox song… One longtime favorite that we will most likely do at some point, though is Swans’ “Failure.” That song has been kind of a reluctant anthem of mine over the years. We try to stick to doing our own material though, for the most part. While we sometimes enjoy playing other bands’ material, especially that which we find meaningful, we need to play our own.

Q: What are your plans for the future?
A. For the near future, we are currently working on a video for the song “Cleansed” from the Flightless album, as well as a new, forthcoming EP (4 songs so far, though it may ultimately develop into more) which is simultaneously a little more synth-based and a little more shoegaze-influenced than our previous material, which we hope to have out in the late spring of 2019. A little longer-term, we are also working on fleshing out another full-length album based around the songs from the first, self-titled EP, that will be more in the vein of Flightless, if a bit more introspective and darker. Beyond that, we hope to play more live shows and expand our geographic range some more in 2019, try some new and different approaches to performing live, and maybe put together some more videos.

Q: Any parting words?
A. There is so much good music out there, though it isn’t always easy to find. Keep searching and support underground bands/artists when you are able to. Also, it may sound like a cliche, but stay true to yourself and create your own story: make art, make music, tell stories, give the rest of us something new to think about or a different perspective, or make us feel something true… For my part, I never know when and where the next thing that will catch my interest and attention will come from, but that’s what keeps life interesting. Thanks for listening.
*
*
*
Thanks